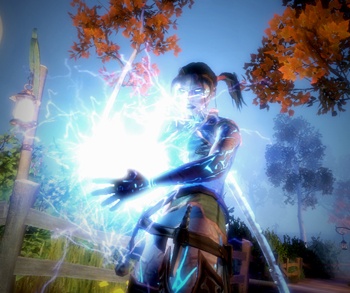 As I mentioned in my review of Fable 2, my husband won’t have sex with me. I’ve given him a nice house – not the nicest in town, perhaps, but quite pleasant – and filled it with brand new furniture. I bring him gifts every time I come home. When he hinted that he’d appreciate it if I dolled myself up a bit, I ran off to redo my hair and makeup as fast as I could. He’s apparently happy and wanting a tumble in the sack, but every time I get him upstairs, he just stares at me stupidly and says “That’s nice, dear.” I think I’m going to have to kill him.

This, in a nutshell, is why I enjoy Fable 2 so much. Not the actual sex or potential homicide of my spouse, but that these are the issues I must face in between the game’s more expected, traditional quests. In between the drama of rescuing kidnapped villagers, slaying monsters and (of course) saving the world from certain destruction, I still have an ordinary life to lead, one that includes paying bills, watching my weight, and keeping my family happy.

Fable 2 is hardly the first game to address the minutiae of everyday life, of course. Will Wright takes evening swims in the money bin he’s filled with profits from sales of The Sims, Animal Crossing and Harvest Moon encase the mundane aspects of everyday life in a glossy sheen of adorable, and Shenmue…well, Shenmue had forklifts. Even games more deeply entrenched in fantasy elements, like World of Warcraft have remnants of real-world activities built into them. But for me, none of these games finds a balance between escapism and relatability quite as well as Fable 2 does.

Granted, finding a reflection of yourself in an RPG is somewhat difficult by nature, because the genre tends to deal with the kind of grand themes that we rarely encounter in daily life. The closest we tend to come to good versus evil is someone swiping our parking space or butting ahead of us in line at Starbuck’s, so taking on the role of the savior of the world is somewhat like putting on a jumpsuit made of feathers – it feels good, but not entirely natural. And while I’ve been an emo, angst-ridden teenager with bad hair and questionable taste in clothing in real life, I’ve never had amnesia, taken on an evil corporation, defended a king, or had my destiny foretold by a prophecy. As a result, I usually feel a bit of distance between my real self and my RPG self.

Some would argue that that’s the whole point, of course, that games are about being someone other than who we are, and I wholeheartedly agree. I want games to take me places that I can’t go in real life, but I enjoy them even more when I can recognize a bit of the landscape. I find games to be more engrossing when I can relate to the character I portray, which is tough to do when they’re hypermuscular knights, willowy elves or whiny, reluctant heroes. That’s not to say that I don’t enjoy playing as those kinds of characters, or that I have to be able to see myself in a game in order to want to play it, but the games that I develop a real bond with, as opposed to those I simply play, enjoy, put aside, are the ones with which I feel some kind of kinship.

I’m more attached to Fable 2‘s Sparrow than I was to Commander Shepard in Mass Effect or even my character in Oblivion because she’s a reflection of not just my game choices or playstyle, but me. She waits to buy expensive items until she finds a sale, she tries to limit the amount of pie and meat she eats, and she spoils her dog positively rotten. She’s just an ordinary gal…as ordinary a gal as a magic-wielding, sword slinging, monster-slaying adventurer can be, anyway.

Fable 2 provides me with the best of both worlds by grounding my hero in reality, then giving her fantasy ways of dealing with that reality. I’ll keep trying to make my husband happy enough to go to bed with me, but if he won’t, rather than wait for him to leave me, I’ll probably just kill him. Not the approach I would take in real life, of course (jail terms are so terribly dull), but that’s the point – this isn’t real life. This is the alternate me, the me that’s almost exactly like me, but just different enough that I can get away with the wanton slaughter of my beloved spouse simply because I find his inability to get naked tedious.

Should I decide to keep my husband around – he’ll give me presents if I keep him relatively happy, so it might be worth it – I’ll probably just find someone else to have sex with. I have plenty of opportunities with attractive members of both genders, and if those dry up for some reason, there’s always the local whore. I’ll just have to be careful to keep a condom in stock; unprotected sex can lead to all sorts of nasty problems, even in Albion.

Susan Arendt recently tried shooting a crossbow in real life, and didn’t just miss the target, but the hay bale it was pinned to, too. She would make a lousy adventurer.