The Kim Possible World Showcase Adventure at Epcot in Disney World is best defined as an alternate reality game (ARG), or a game that uses the real world as its play-space. Kim Possible was an animated series about a team of teenage crime-fighters that ran from 2002 to 2007 on The Disney Channel. The main characters, high school students named Kim Possible and Ron Stoppable, traveled the world fighting super-villains.

The Kim Possible recruiting station at Epcot is staffed with cast members dressed in purple and black Team Possible uniforms tending to banks of computer screens surrounded by little kids and their parents. My wife and I had always assumed the activity was meant for kids and snubbed it, but on our most recent visit to Epcot, we realized that after visiting the park once or twice a year since 1998 we were running out of new things to do, and decided to give the World Showcase Adventure a try. We stepped up to the recruitment station and “signed up” by giving a cast member my plastic resort key which she slid through a card reader before handing me what looked like a ride ticket and telling us to go to another recruiting station between the England and France pavilions.

“Hi. My wife and I are secret agents,” I said as I handed the ticket to a cast member at the second recruiting station. She gave us a Samsung flip-phone and explained that this was our Kimmunicator, which we would use to correspond with the Kim Possible team to help them fight seven super villains trying to take over the world. We walked away from the station and turned the Kimmunicator on. A tubby, cartoon teenage computer expert named Wade appeared on the screen, introduced himself, and explained how the buttons worked. Then Wade showed us a photograph of where we had to go in France (read: the France pavilion) and told us to check in once we got there. When we had found the right spot and pressed a button on the Kimmunicator, Wade appeared on the screen again and said we had to download a computer code to help Team Possible defeat the super villain threatening France. Then he said to turn around and look at the vase in the window behind us.

Each of the eleven pavilions in Epcot is kind of like a tiny movie set dressed with props that, along with the cast members and architecture, are meant to convey the sense of actually being in another country. The vase in the window was one of those props, ostensibly meant to be something you might see in the window of a Parisian apartment. My wife and I had probably seen, but paid no attention to, that vase dozens of times during our trips to Epcot, but this time the top of the vase opened and a little satellite dish popped out and spun around. Wade appeared on the Kimmunicator to tell us that we’d downloaded the code and showed us a picture of the next place we had to go in France to continue our mission.

That’s basically how the World Showcase Adventure is played. It’s part scavenger hunt and part alternate reality game (ARG), and the amount of hidden secrets woven into the game all around Epcot is amazing. A chimney on top of a building emitted a thick plume of smoke, which was a pretend signal to friendly spies that we’d accomplished part of a mission. A poster was revealed as a hidden set of Venetian blinds that opened up to reveal an animated scene of a meeting that we pretended to spy on. A hidden code word glowed on the surface of a rock and then vanished without a trace. Some of the missions had us passing code phrases on to cast members, who then handed us the next clue. One mission even revealed a life-sized model of the villain being chased out of his hiding spot and across the roof of a house. The spirit of discovery was so much fun that I ran my wife through four of the seven missions the first night we played the game, to the tune of about four hours’ worth of walking around and exploring the World Showcase. 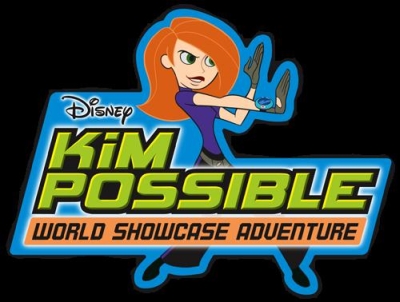 At one point my wife and I got stuck behind a small group of kids and parents who were one step ahead of us in the Norway pavilion mission, and as we swooped in behind them to uncover the next hidden secret, one of the kids noticed the Kimmunicator in my hand. He was around eight years old with tousled, blond hair, wore glasses and looked like he was still losing some baby teeth from gaps in the smile he beamed at me. I told my wife about it over dinner a few hours later and asked why she thought the kid had been smiling at me. “Probably because he realized that you and he were playing the same game,” she said, and that’s when I realized I had been thinking about the World Showcase Adventure as a game, which was in conflict with how I’d been thinking of what defines “a game.”

For example, Passage is a five-minute videogame designed by Jason Rohrer wherein the player wanders through the play space collecting objects, eventually finds a wife who accompanies them and enriches the experience, who then dies shortly before the player does. The game ends the same way, every time, no matter what the player does. I’ve argued that Passage wasn’t actually a videogame because it had no rules, no way to win or lose, or anything else that felt like a “game” to me. I’ve employed similar arguments to question whether social games on Facebook are actually videogames, and even argued that play is about rules, and rules are enforced by mechanics. Therefore, without clear-cut rules like victory conditions, how could something be called a game?

The World Showcase Adventure certainly didn’t have any rules I recognized as such. It surely wasn’t possible to lose the game, as anyone who got stuck would get hints to walk them through it, so winning made no sense conceptually, either. Progress through each mission wasn’t timed so there was nothing like a score. I was having trouble figuring out why the hell I would consider the World Showcase Adventure a game, until I thought again about that little kid smiling up at me. Games can also be about exploration and discovery and learning, which are all the building blocks of what developmental psychologists call “play.” Games are defined by the fact that we play them, and everything else like rules or scoring or winning and losing is optional. That’s precisely the sort of wisdom that children intuit and adults forget.

I wish I could thank that little kid for helping to remind me what I’d forgotten after being steeped in the hyper-competitiveness of core gaming for so long. And I hope I remember this lesson the next time I consider the audacity of telling someone the game they are playing and enjoying, whether it’s Passage or Farmville or anything else that pushes the edges of the popular concept of a game, isn’t actually a game. If someone had told me that the Kim Possible World Showcase Adventure wasn’t actually a game while I’d been playing it, because it had no score and was impossible to lose, my response to that person trying to ruin my good time would have been unbecoming of a theme park filed with children.