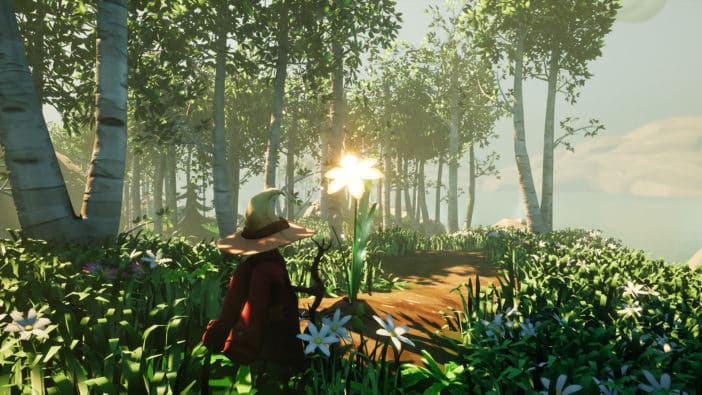 Most of the time, I play video games as a way to relax and unwind after a busy day. Sinking into another world, one with clear rules and a resounding sense of achievement, is preferable to the uncertainty of day-to-day life. However, as much as I enjoy these titles, many of them are far more stress-inducing than they initially appear. Speedily sliding blocks in a competitive puzzler, deftly dodging enemies in Soulslikes, and pursuing the top spot in a battle royale takes enough mental energy that sometimes players need downtime from their downtime. Kinoko, a free project by student developers ThunderLime, perfectly fills that need for respite. A brief, beautiful exploration of the last breath of winter, this gorgeous game is just the pause I needed.

Kinoko follows the travels of a forest spirit, a magical being responsible for clearing away the last vestiges of winter. Wandering through a stunningly beautiful forest, the spirit shakes snow from trees, plants flowers, and breaks down clumps of ice. As the snowfall of each area is cleared away, the first signs of spring emerge, walls of white replaced with vibrant grass and earth. 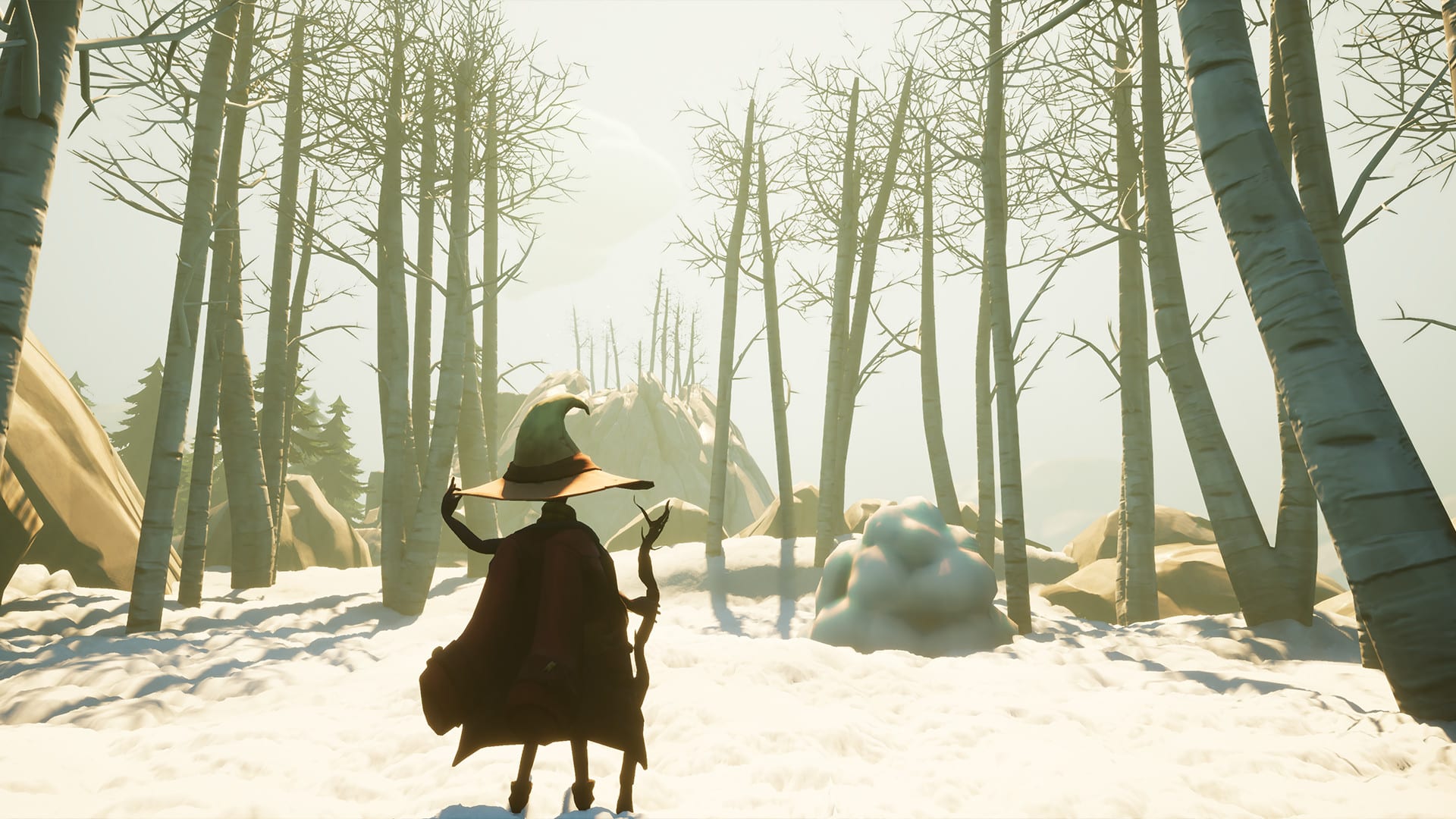 Progressing through Kinoko involves a small but satisfying gameplay loop where the player must find all the snow-laden trees, snowdrifts, and fertile soil in an area and remove all the ice before moving on to a new section of woodland. Performing these tasks is simple, with one context-sensitive button used for all actions. The game has a gentle difficulty curve, with larger areas to explore and objects better hidden in the latter half of the 20-minute playtime, but the main focus of the experience is to simply soak in the atmosphere. Exploring in Kinoko is truly peaceful — a nature walk where the world slowly transforms step by step.

Capturing that slight hint of magic in the air as the seasons change is achieved through masterful art direction. The graphical style is low-polygon throughout — from the forest spirit to the trees framing the world — but soft, warm lighting makes everything appear calm and welcoming. While the majority of playtime is spent exploring icy woodlands, mysterious structures connect one area to the next, sending the player over shifting stone pillars and through luminous mushroom caves. The forest spirits communicate in pictograms rather than dialogue, adding an alien, mysterious air to the world. Accompanying the player through their journey is a simple piano tune, a tone that urges you to stop and smell the flowers. 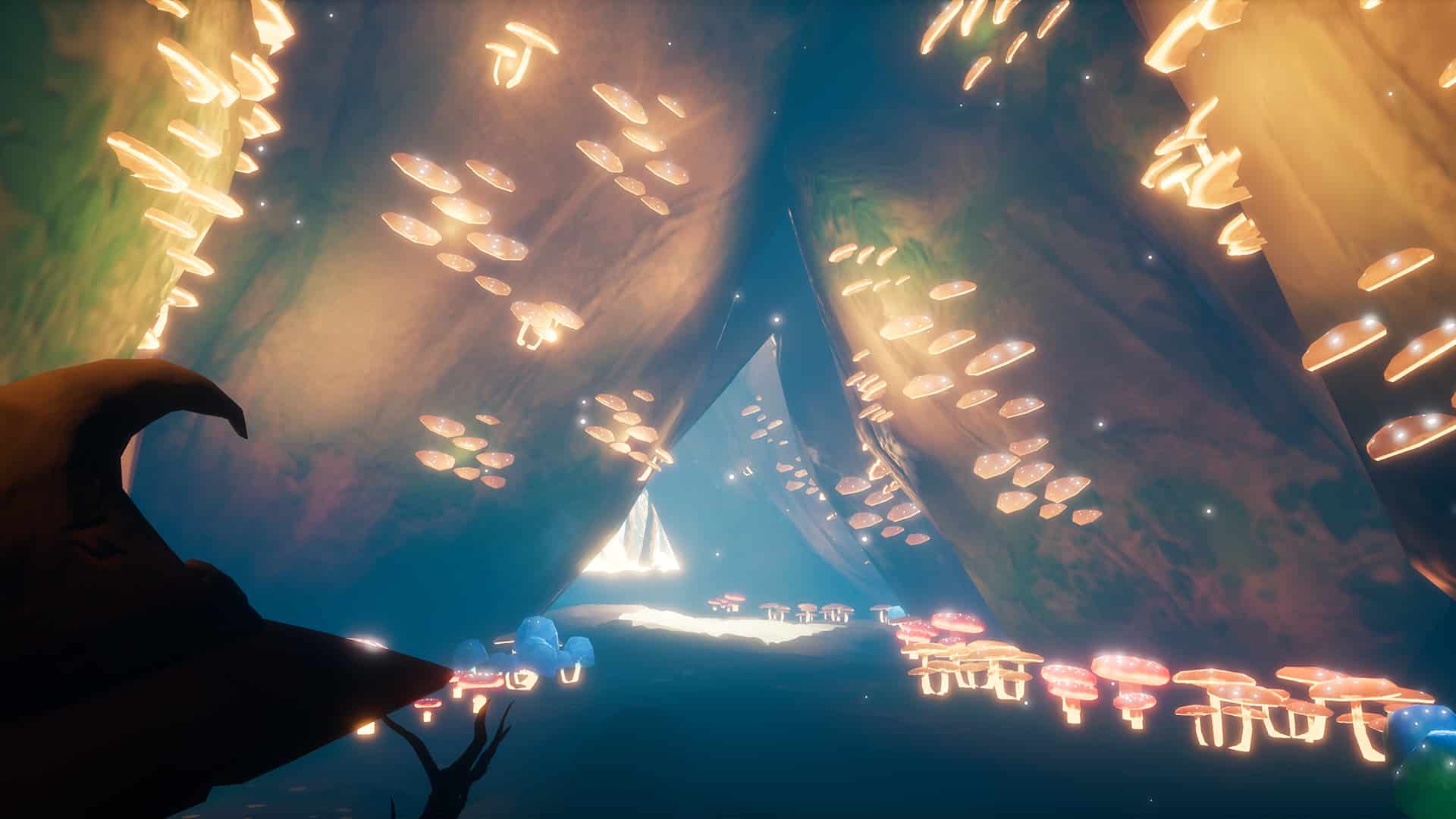 Kinoko is misleadingly tagged as a puzzle game on Steam, which may lead some players to be disappointed. I certainly expected an elevation of difficulty in performing the core winter busting tasks: perhaps lining up platforms to get access to a well-hidden tree, or finding seeds for the fertile soil rather than possessing an unlimited supply.

Such gamification is not necessary, however, since the experience is more about capturing a certain feeling than testing knowledge or reflexes. A more movement-focused game would also need an overhaul of the controls, as moving the forest spirit is a bit finicky with a gamepad and extremely frustrating with keyboard and mouse.

Walking simulators may have a bad reputation with certain audiences, but when you need a moment to relax, no other genre does the job as well. Kinoko‘s light exploration and charming visuals are a compelling invitation to take the time to slow down and unwind.

Next week we will be playing Rain on Your Parade: Prologue, a comedy game where a mischievous cloud ruins people’s day. The game can be downloaded from itch.io. If you would like to share your thoughts, discussions will be happening in the Discord server.