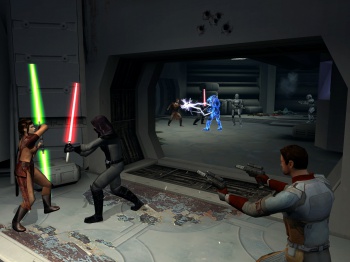 Knights of the Old Republic was great, and Phil Spencer agrees – though bringing it back won’t be easy.

There are few RPGs that measure up to the first Knights of the Old Republic, which is now more than a decade old. It’s still fun today (as evidenced by last year’s iPad port), but some may find it a bit outdated. In all likelihood that won’t change anytime soon, but the seed of hope is there – for what it’s worth, Microsoft Studios Executive VP Phil Spencer thinks an updated Anniversary Edition is a good idea.

A curious fan on Twitter asked Spencer about his favorite RPGs, and the Microsoft exec mentioned Knights of the Old Republic as one of his top six (the others being Ultima Online, Bard’s Tale, Morrowind, Fallout, and Balder’s Gate – he’s a man of good taste). When the fan asked about the possibility of a remake, Spencer replied that he’d “put a vote in.”

@JacobTaylorN7 I like the idea. No idea how the rights would work on that now with all the changes. I'll put a vote in.— Phil Spencer (@XboxP3) February 26, 2014

As he points out, the rights to the game are easily the biggest obstacle to any kind of Anniversary Edition. Fable and Halo have both seen HD Anniversary re-releases, but those IPs are still held by Microsoft. While KOTOR certainly shaped the early days of the first Xbox as much as those games did, the IP is all over the place these days. BioWare made the game, which means EA would probably get involved, and even then it might need to go through Disney now that they’re in charge of Star Wars.

In other words, don’t hold your breath – but it’s good to know that KOTOR fans have allies in high places.