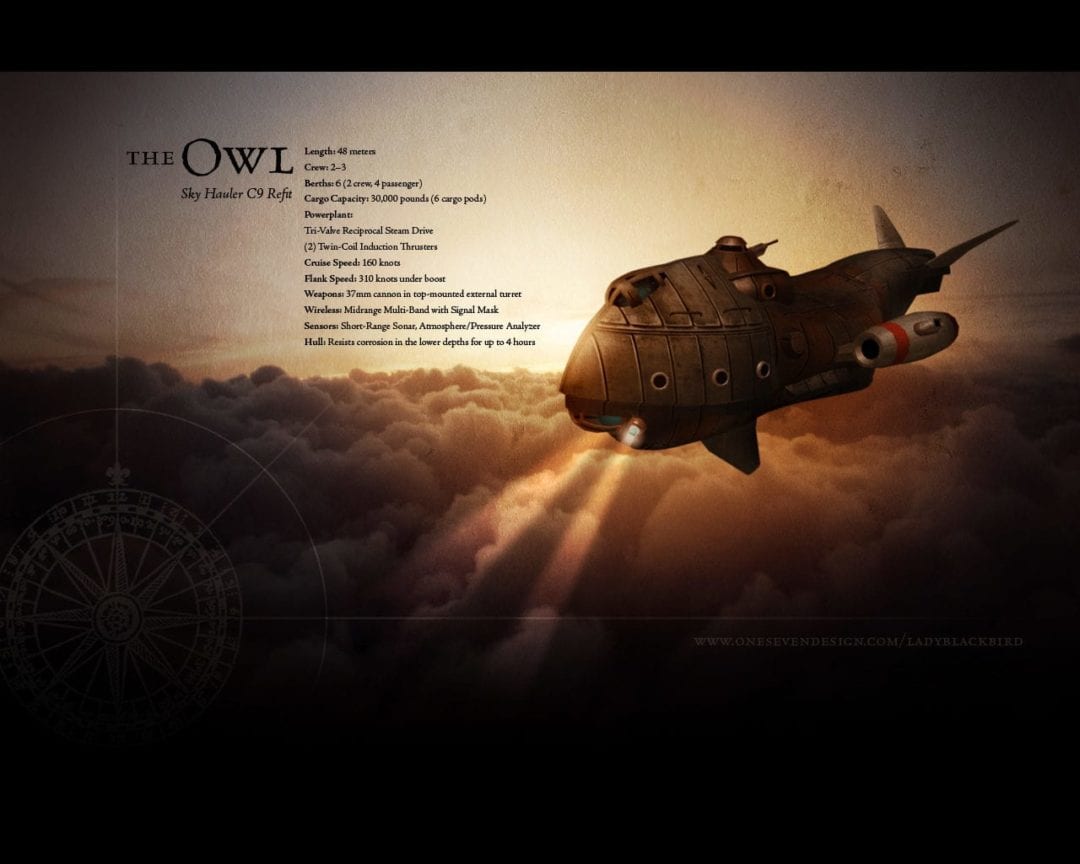 Season three of Lady Blackbird kicked off on Saturday. The pre-holiday cliffhanger had seen Lady Blackbird and Captain Cyrus Vance captured as part of a daring mission to rescue kidnapped children before they’re fully indoctrinated into becoming perfect Imperial soldiers. Meanwhile their allies, the shapeshifting goblin Snargle and the mischievous mechanic Kale, were struggling with kids so brainwashed they didn’t think they needed rescuing. No one knew how the heroes would get out of their predicaments, and the season three premiere was filled with surprises including visits from time traveling older and younger versions of Cyrus. About six hours later, the heroes were all back on their smuggling ship, The Owl, and rushing to rendezvous with their allies aboard a stolen gunship. Their adventures will continue in March, which is the next time everyone involved had a weekend day free.

Lady Blackbird isn’t a TV show but a tabletop roleplaying game developed by John Harper of One Seven Design. And it definitely wasn’t meant to go on for three years.

Our game started on a whim. One of my friends had gotten into indie RPGs and had started organizing sessions to try new ones. The first one I tried, Juggernaut, has a group of players locked in a room with a supercomputer that can predict the future. I loved it, so I quickly signed up when she was looking for five players for Lady Blackbird, a space opera in the style of Firefly or Star Wars that favors narrative over codified rules. She ran the game at my house for a mix of veteran roleplayers and first timers. The characters are pregenerated, each given just a single line of description with further depth gleaned from their unique abilities and ways of gaining experience points. Our GM doled out the characters based on what she thought each player would have fun with. I wound up as Lady Blackbird, who’s basically Princess Leia if she also had the powers of the X-Men’s Storm.

Lady Blackbird is on the run from an arranged marriage with the dastardly Count Carlowe and seeking refuge in the Remnants, a wild part of space ruled by her lover, the pirate king Uriah Flint. She’s hired The Owl to take her there, but when the game opens the ship has been captured by an Imperial cruiser, which is a problem since Cyrus and his crew are all wanted fugitives. The game’s entire rulebook is 16 pages, including character sheets, and devotes just a page to potential challenges the characters could face on their quest. Lady Blackbird’s rules suggest playing for just one to three sessions. But we had so much fun we didn’t stop.

Well most of us did. Our Naomi, Lady Blackbird’s bodyguard, decided after session one that roleplaying wasn’t for her, and so the poor character has been critically injured, captured, and turned into a monster to make up for the fact that no one is playing her. But the rest of us pressed on, weaving together an increasingly elaborate portrait of our characters and the world they occupy. Part of this manifests through “refreshment scenes,” flashbacks or intimate conversations between characters that the standard rules of the game state can be used to regain resources used in combat or other challenges. Even more has been done between sessions by our GM and various players who have worked together to go way beyond the one page of setting description shared in the book.

The rules list the names of eight noble houses, but we’ve since added many more along with plots involving them like House Ash’s alliance with Count Carlowe to develop antimagic technology. Kale’s petty magics provided the jumping off point for an entire adventure set in the dream world. Snargle’s player provided most of the plot for season two, where it was revealed that Count Carlowe was working on his own force of shapeshifting goblin soldiers and human-goblin hybrids. The player of Cyrus, who started with just the power to teleport once per session, persuaded our GM to let him also travel back in time very briefly. This has let us get out of some extremely sticky situations but also serves as the seed for the most surprising events of last session. It’s been a wonderful exercise in collaborative storytelling. Lady Blackbird’s malleability has only made us less likely to end the game.

Most long-running games I’m in start with careful planning, ensuring that everyone involved has compatible schedules and gets along well, especially in a gaming setting. But Lady Blackbird was a happy accident, a gathering of people the game master knew and liked but who mostly didn’t know each other at all. It could so easily have gone wrong considering the built in character dynamics, which actually reward players with XP for emphasizing things like Cyrus’ secret love for Lady Blackbird, Kale’s kleptomania, or Lady Blackbird’s need to prove herself superior to everyone else.

But there are specific aspects of the game that make it work well too. Lady Blackbird has a GM to keep things on track and handle much of the plot and planning so that the narrative can stay coherent over time, a role many indie RPGs do away with. The rules are so light that everyone could grasp them almost immediately and devote the rest of their time to developing their characters. But the real strength might just be the humor and creativity of the group that lets us seamlessly move between weird running gags about The Owl’s hamster infestation, dramatic fight scenes, and quiet emotional moments.

The game went so right that we made T-shirts with the names of the characters on them. Cyrus’ player tells stories from the game with his daughter at bedtime, though he’s disappointed she seems to prefer hearing about Snargle rather than his own character. We’ve developed a little ritual where we share beer with names relevant to the game like 3 Floyds’ Dark Lord in honor of  Count Carlowe or Pipeworks’ Abduction to represent those kidnapped kids. Our schedules aren’t compatible at all, which is why we’re playing next in two months, but we’re all excited about more adventures to come.

Want to go on your own indefinite adventurers? You can download Lady Blackbird for free at onesevendesign.com/ladyblackbird.