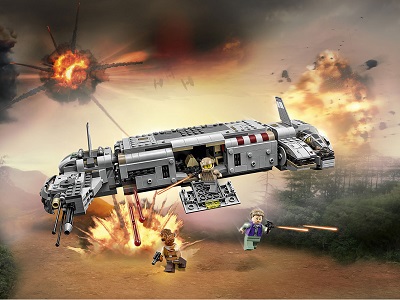 LEGO has announced a slew of new Star Wars construction sets based on the original trilogy, The Force Awakens and more.

This past weekend, LEGO unveiled Assault on Hoth, a large and expensive Star Wars set geared toward recreating the iconic Battle of Hoth. Big as that beast is however, it’s just the tip of the iceberg when it comes to new Star Wars-themed LEGO playsets for the coming year. Using the 2016 New York Toy Fair as an opportunity to showcase its new and upcoming products, LEGO has unveiled a smorgasbord of new products based on everyone’s favorite galaxy far, far away.

This year, LEGO will be releasing a whopping range of Star Wars sets based on a variety of different properties within the franchise. Fans of The Force Awakens, for instance, will be able to pick up sets featuring new recreating the Battle on Takodana, the Resistance’s Troop Transport and more. These sets will include first time ever mini-figures for characters like Maz Kanata, Admiral Ackbar, General Leia Organa and the First Order Snowtroopers. Five news sets have already hit stores with one more arriving in March and two in June.

In addition to its Force Awakens products, LEGO has also unveiled new sets from the original Star Wars trilogy. Among these will be the Assault On Hoth construction set as well as models based on Bespin’s Carbon-Freezing Chamber and the Escape Pod from A New Hope. LEGO will also be releasing new sets based on Star Wars: Rebels next month.


Perhaps the biggest new announcement from LEGO’s showcase however is its unveiling of LEGO Star Wars: The Freemaker Adventurers. A new animated TV series, the show will focus on the titular Freemakers, a family “who build and sell starships” from parts scavenged from battles around the galaxy. While the show will be targeted toward children, adult Star Wars buffs might still something to enjoy and, if nothing else, will likely appreciate the “Eclipse Fighter” and “StarScavenger” construction sets LEGO plans to sell based on it. The show itself will debut later this year.

Help Leonardo DiCaprio Get an Oscar in This Free Browser Game