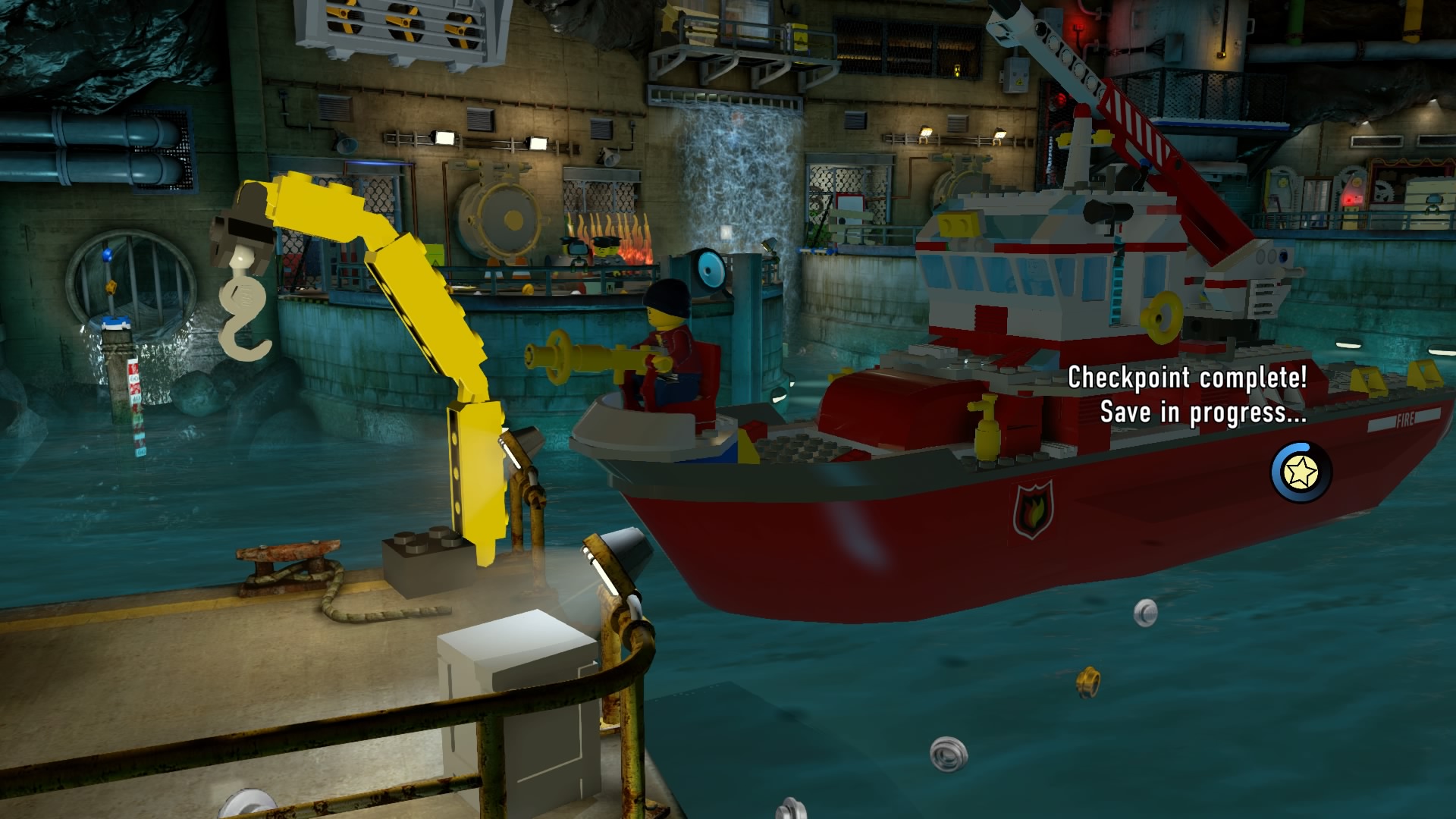 There’s no time to lose in Chapter 11 of LEGO City: Undercover. Here, Chase needs to spy on a secret meeting with Rex before breaking into Forrest Blackwell’s secret vault.

There are two lengthy tasks and two Special Assignment levels available in Chapter 11 — Blackwell’s Mansion: Robbery and Pappalardo’s Ice Cream Parlor are both hotspots for Chase. You’ll also have to complete a tricky trek across multiple rooftops at the start of the chapter. Don’t worry detective, we’ll help you solve every aspect of the case with some step-by-step instructions.

Don’t miss out on Part 2 of Chapter 11 — check out the Table of Contents to jump straight to Pappalardo’s Ice Cream Parlor.

Chapter 11: The Proof of the Pudding is in the Meeting

Chase has been so busy dealing with museum heists and Fire Station swindles, he’s about to miss the big meeting between Vinnie Pappalardo and Rex. Follow the Sat Nav Studs to Vinnie’s restaurant in Fresco.

Meet up with Moe, and he’ll tell Chase to find a high vantage point to spy on the meeting. They’re down in Paradise Sands – that’s your next stop. The Honey Hotel is your destination.

Frank Honey’s parents own this place, and it’s a great spot for secretly watching meetings between big-time criminals. 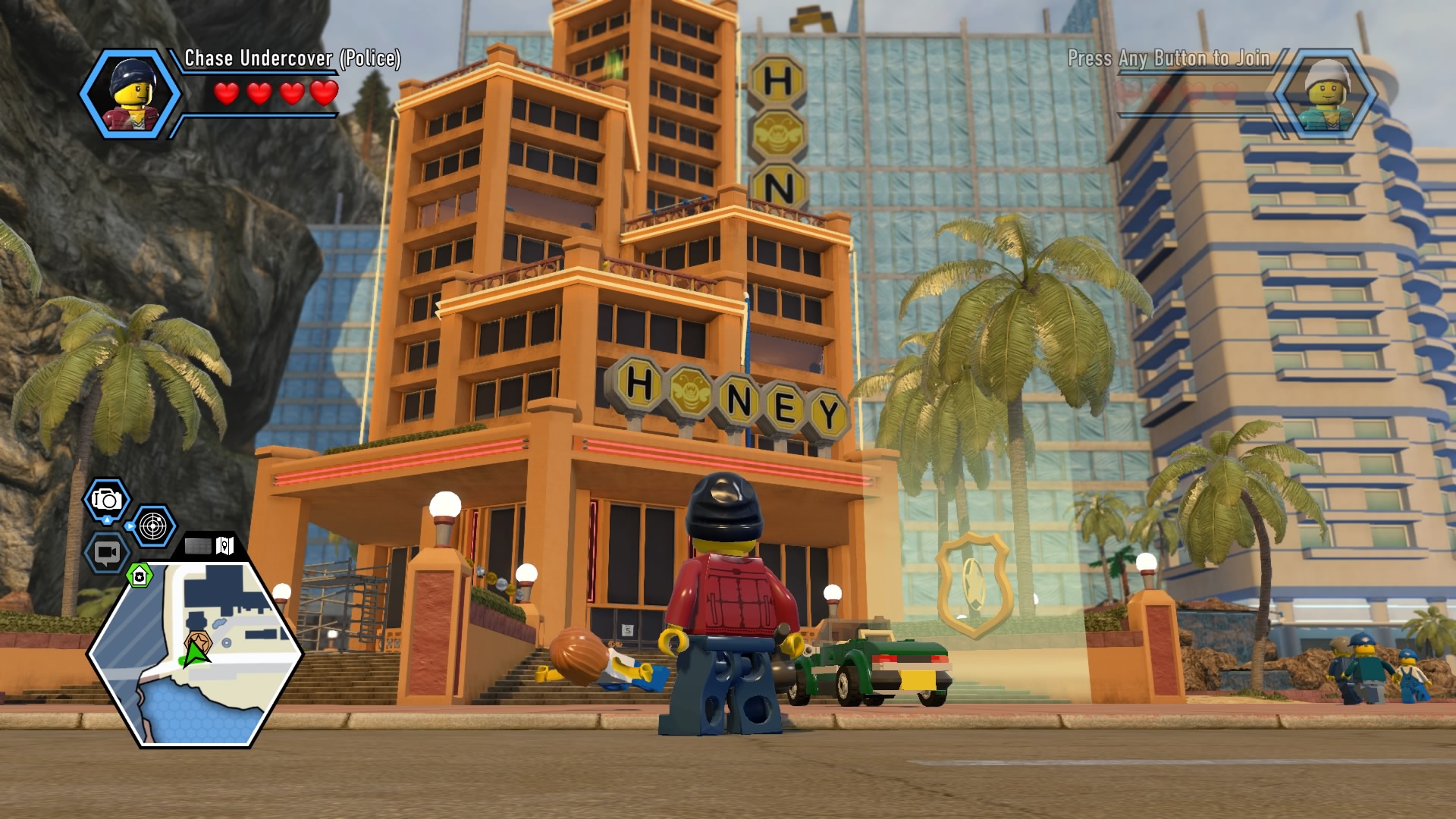 The front doors are shut, so Chase will have to find an alternate route. Follow the line of studs to the left of the doors and climb the scaffolding. At the top, hop to the blue / white Free Run handholds. Run right on the balcony and climb the blue pole to reach the LEGO giant bee statue.

Behind the statue, bust open the crowbar door with the Robber Disguise. Break all the LEGO stuff inside to build a Color Swapper – this one gives you green. Shoot the red light under the LEGO bee statue with the green color gun. That transforms the bee statue into a lift. Ride up to the next tier.

On this balcony, you’ll find gym equipment, and a very rude gym member. He won’t let Chase in the gym until he proves his skills – use all three pieces of gym equipment to impress him. When he’s sufficiently impressed, use the Miner Disguise to grab TNT from the vending machine and place it in the waypoint barrel. Ride the elevator through the busted door to reach the pool level.

Frank Honey is lounging in the pool with his horse (?!) but you’ve got places to be. Frank points Chase toward the Herbert Hotel. That’s clear on the other side of town! To get there, use the Super Chicken marker, swap to the Farmer Disguise, and use the green rings to glide all the way across. 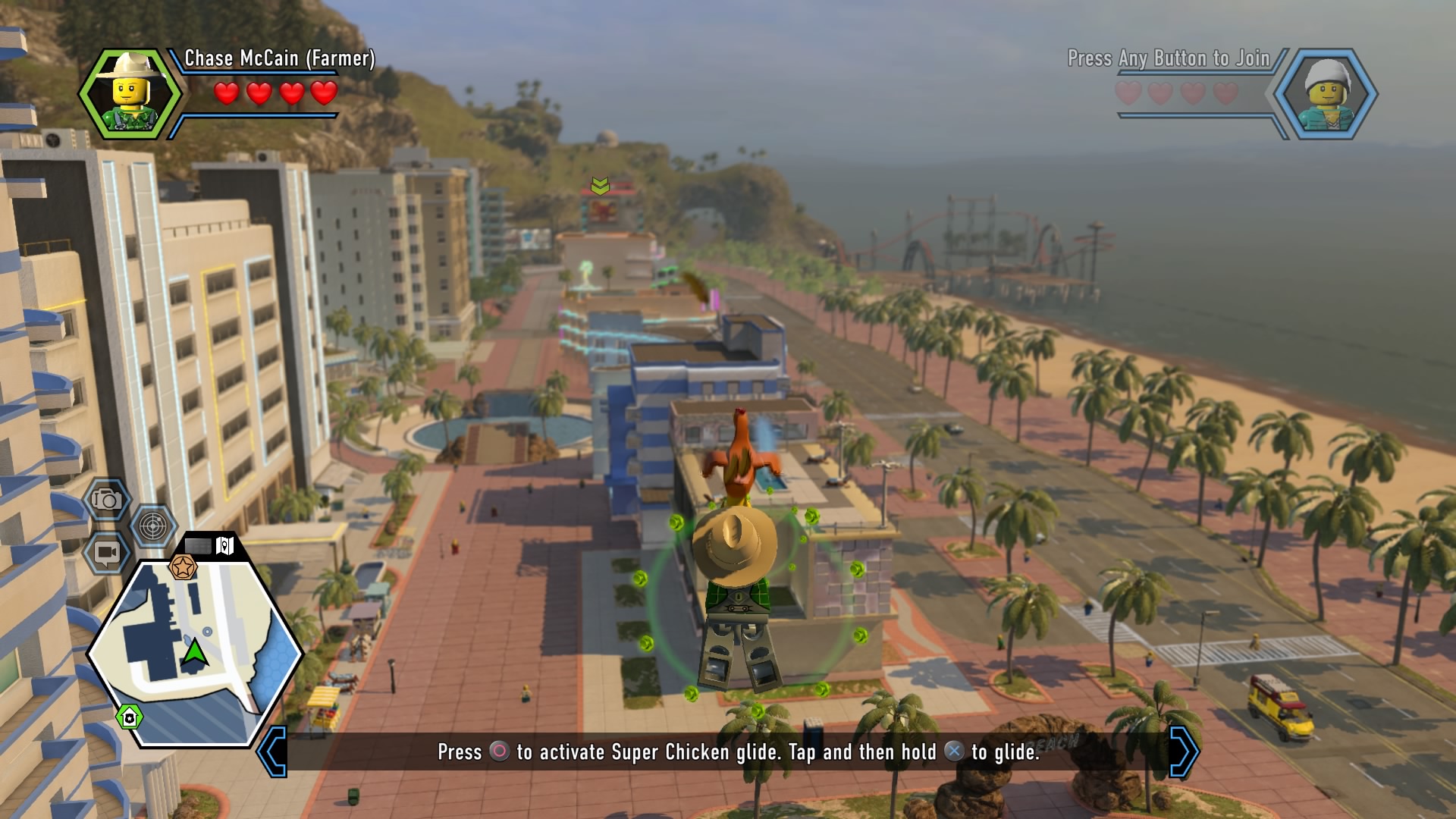 When you land, water the flowers and climb the vines that appear. On the rooftop with the fountain, bust through the crowbar door with the Robber Disguise, then open the safe with the same disguise. Grab the little red stopper and place it on the waypoint – right on one of the fountains. You’ll need two more – one is in the LEGO lounge chain on the right, and another is in the lounge chair on the left. The left chair (when smashed) reveals a Detective Scan marker. Use it to find the last red LEGO stopper.

With all three LEGO stoppers in place, ride the powerful fountain of water up to the office rooftop. Then, jump to the blue / white building, clinging to the Free Run wall. Smash the LEGO air conditioner up here, construct, and climb to get to a zip-line. Zip on down and arrest the angry thugs on the next rooftop.

Continuing forward, find the two red LEGO pots and water both, using the Farmer Disguise to grow two bouncy LEGO flowers. Jump up onto the wall with the blue LEGO brick and cross the tightrope. We’re very slowly making progress. On the second rooftop from the tightrope, smash the LEGO dumpster and build a Color Swapper. Load your Color Gun with blue and shoot the white LEGO wall to the back-left. Climb up and cross the tightrope to reach a Super Build. 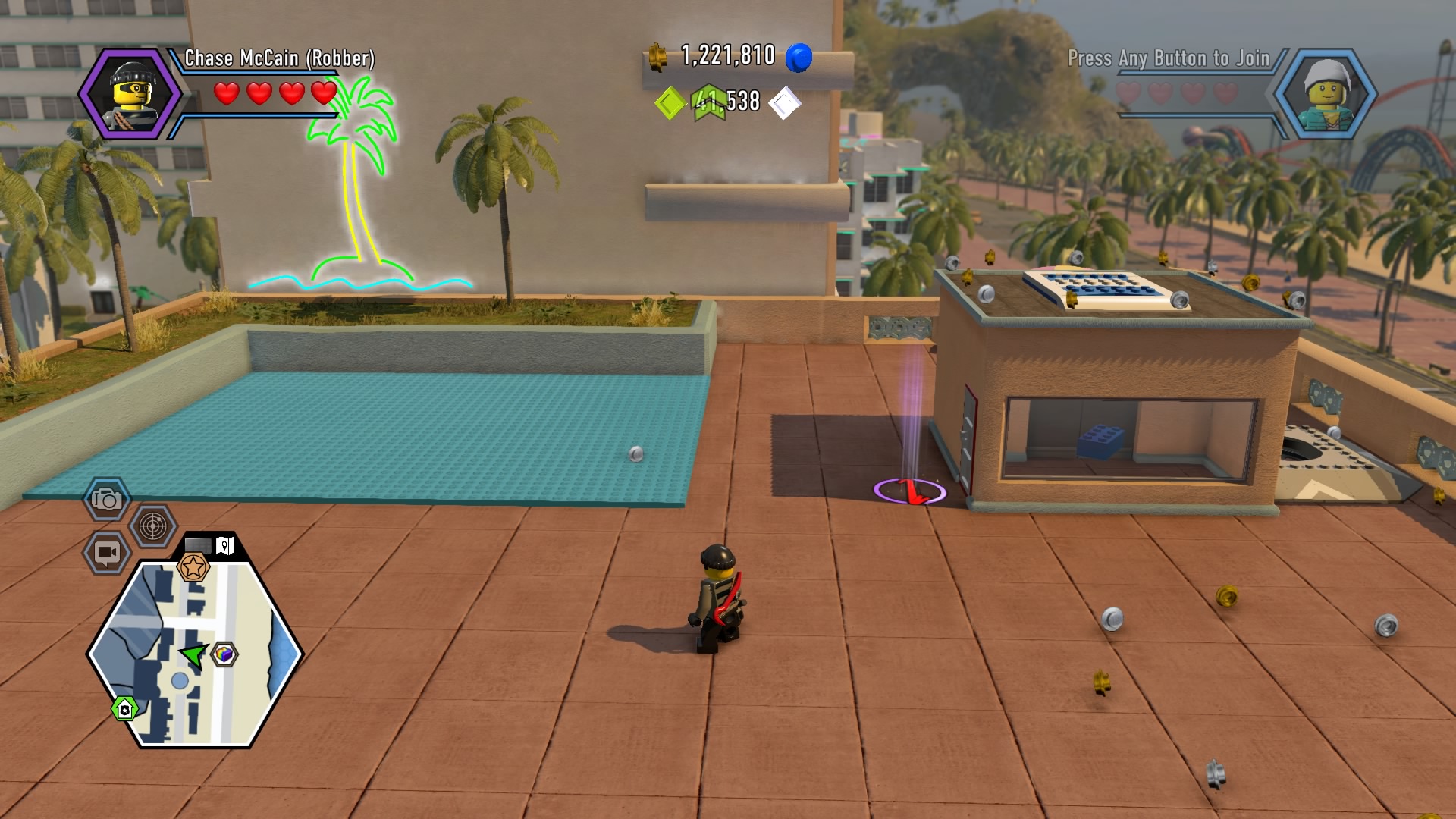 To build the Paradise Pool Super Build, you’ll need 30,000 bricks. There are 10,000 directly to the right of the build – bust open the crowbar door to get them. You’ll find another 10,000 through the barred door, on the previous rooftop – right next to the blue / white LEGO wall you can climb.

Complete the Super Build and fill the empty pool with water using the Fireman Disguise. When the pool is full, the beach ball will roll out. Hop on and control it like a vehicle, and follow the studs that appear to slot the beach ball into the hole to the right of the small shed. Jump onto the roof and step onto the catapult – we’re getting closer to the meeting!

On the next rooftop, smash the black LEGO boulders using the Miner Disguise to reveal a teleporter pad. The Astronaut Disguise can use this! Teleport, and on this rooftop you’ll find a bunch of small LEGO fences. Grab the LEGO crate to the right of the teleporter and place it on the green stud spot. Build the RC Car, and control it through the obstacle course to deliver the dynamite charge at the finish line. Wreck the metal scaffolds (before time runs out) and then build the broken LEGO bits into a Color Swapper. 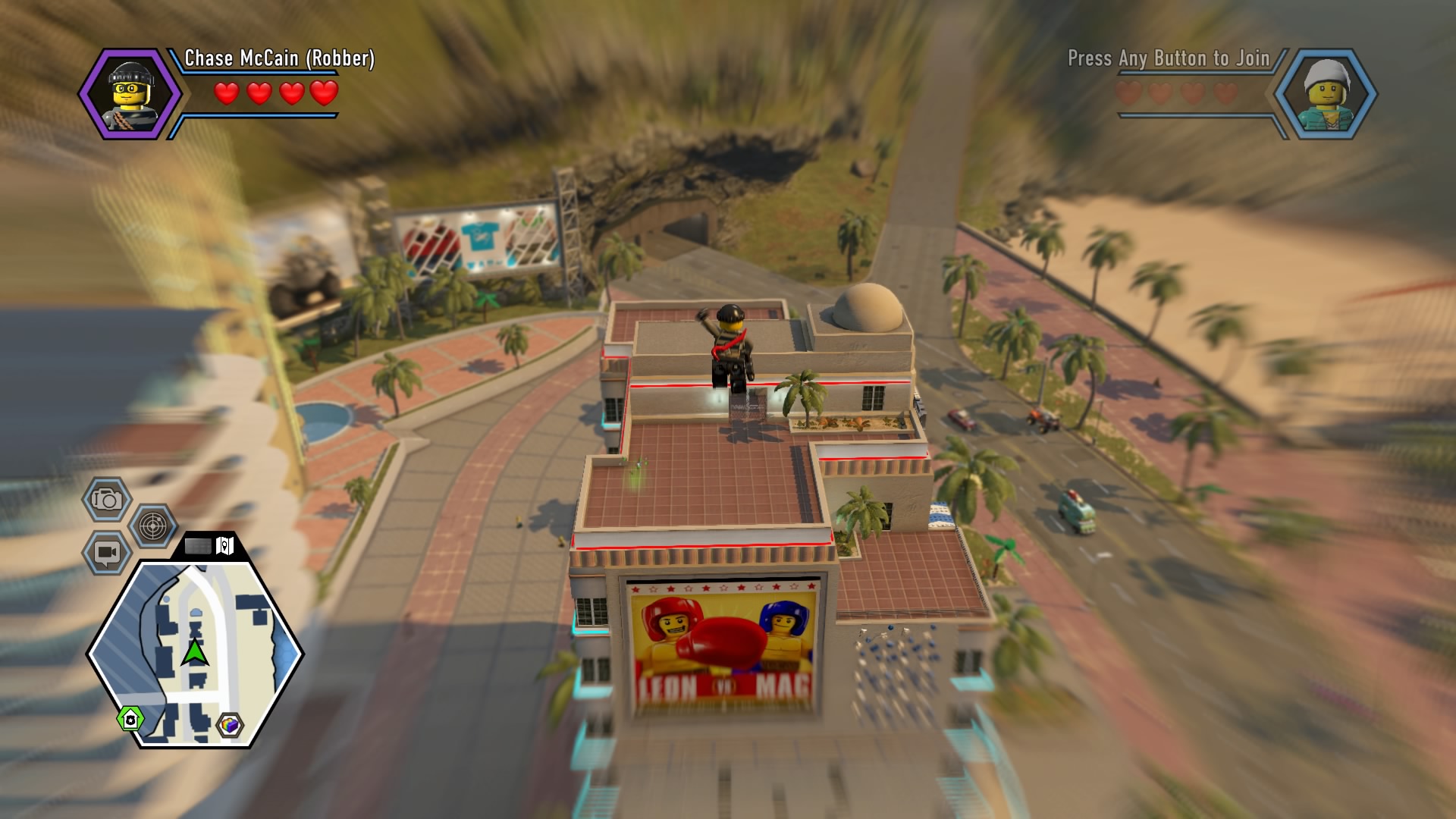 Collect green for the Color Gun, then ride the teleporter back to the previous rooftop. Shoot the red light with your new green Color Gun to reveal a catapult. You know what to do – ride that sucker. You’ll land on the side of a building. Use the Free Run bricks to shimmy right and climb up, then axe through the door (Fireman Disguise) and crack the safe (Robber Disguise) to get the key. Wall-run back to the locked door and unlock it.

Through the locker door, you’ll move to another roof. Up top, use the Audio Scan marker to listen to Rex Fury’s conversation with Vinnie. It’s clear they aren’t getting along, but Moe needs you for a different job. Meet Moe down at the Sea Tunnel in Paradise Sands. Follow the Nav Studs, they’ll lead you to the Fireboat you stole earlier. 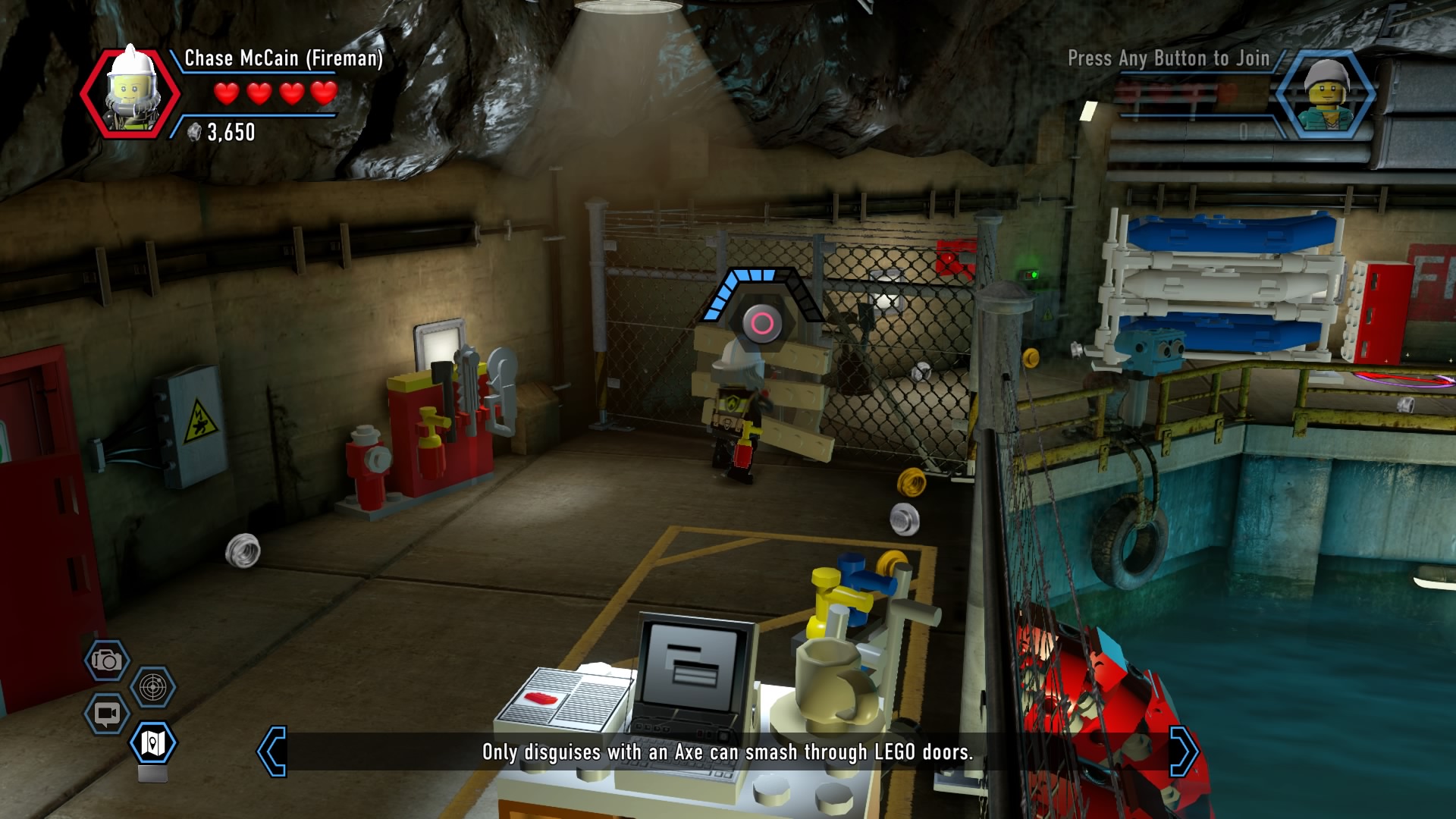 It’s time to rob Forrest Blackwell, the king of LEGO City. You’ll infiltrate his secret tunnel using the stolen fireboat, but once you’re docked, you’ll have to fight up to Blackwell’s safe and steal the contents. 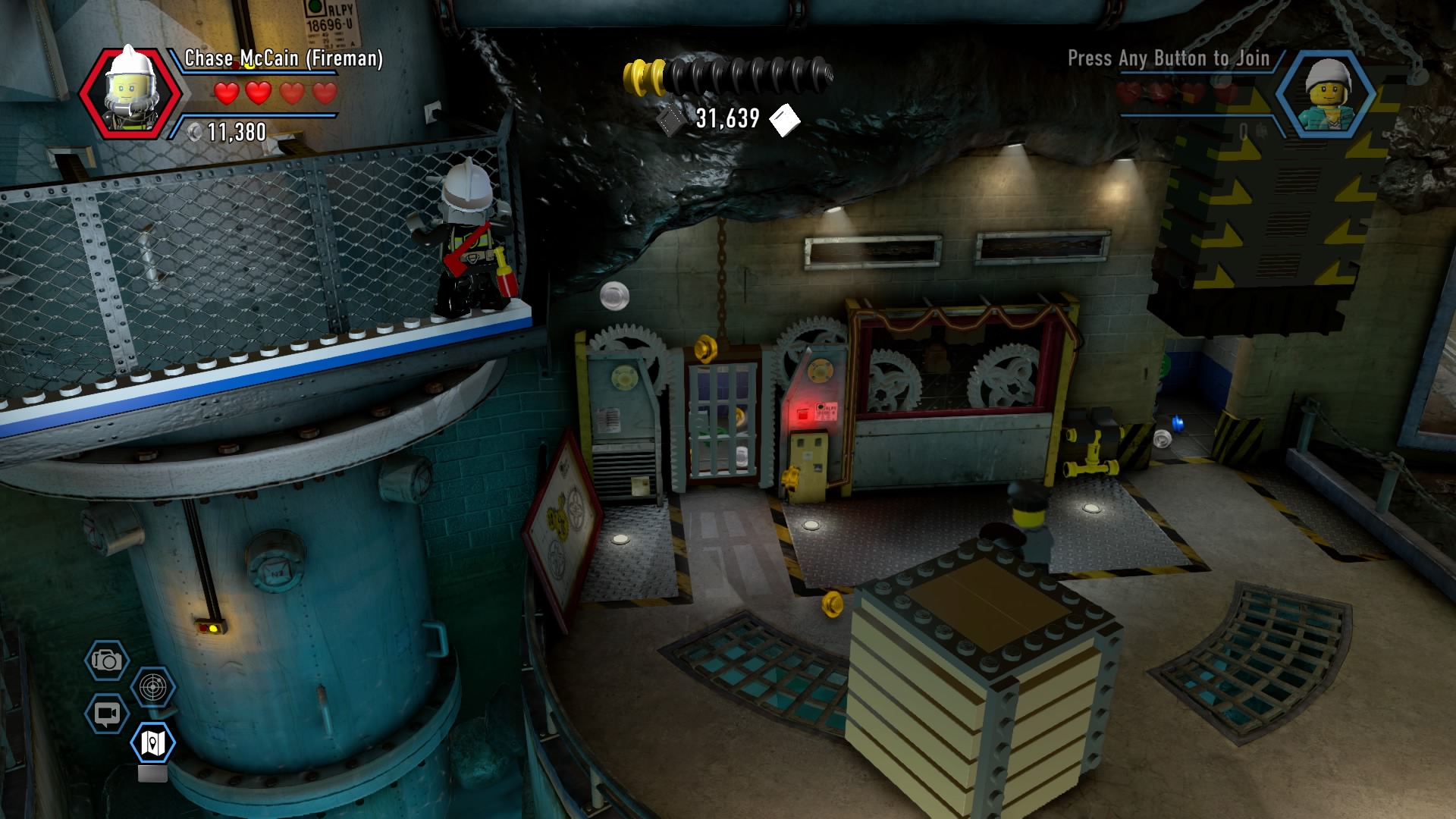 Place the wheel and turn it behind the right gate to raise a bridge. Cross that bridge, and more guards will arrive when the elevator doors open. Smash the LEGO barrel near the electrified gate, build, and water the planter to create a wall of LEGO vines. Climb up and jump to the vent on the right. Crowbar the vent cover, drop down, and collect the red color from the Color Swapper.

Shoot the green light to the left of the Color Swapper to deactivate the electrified metal LEGO door. With that door open, grab the LEGO crate and place it on the green waypoint near the elevator doors. Hop in the lift to ride up into Blackwell’s manor proper. 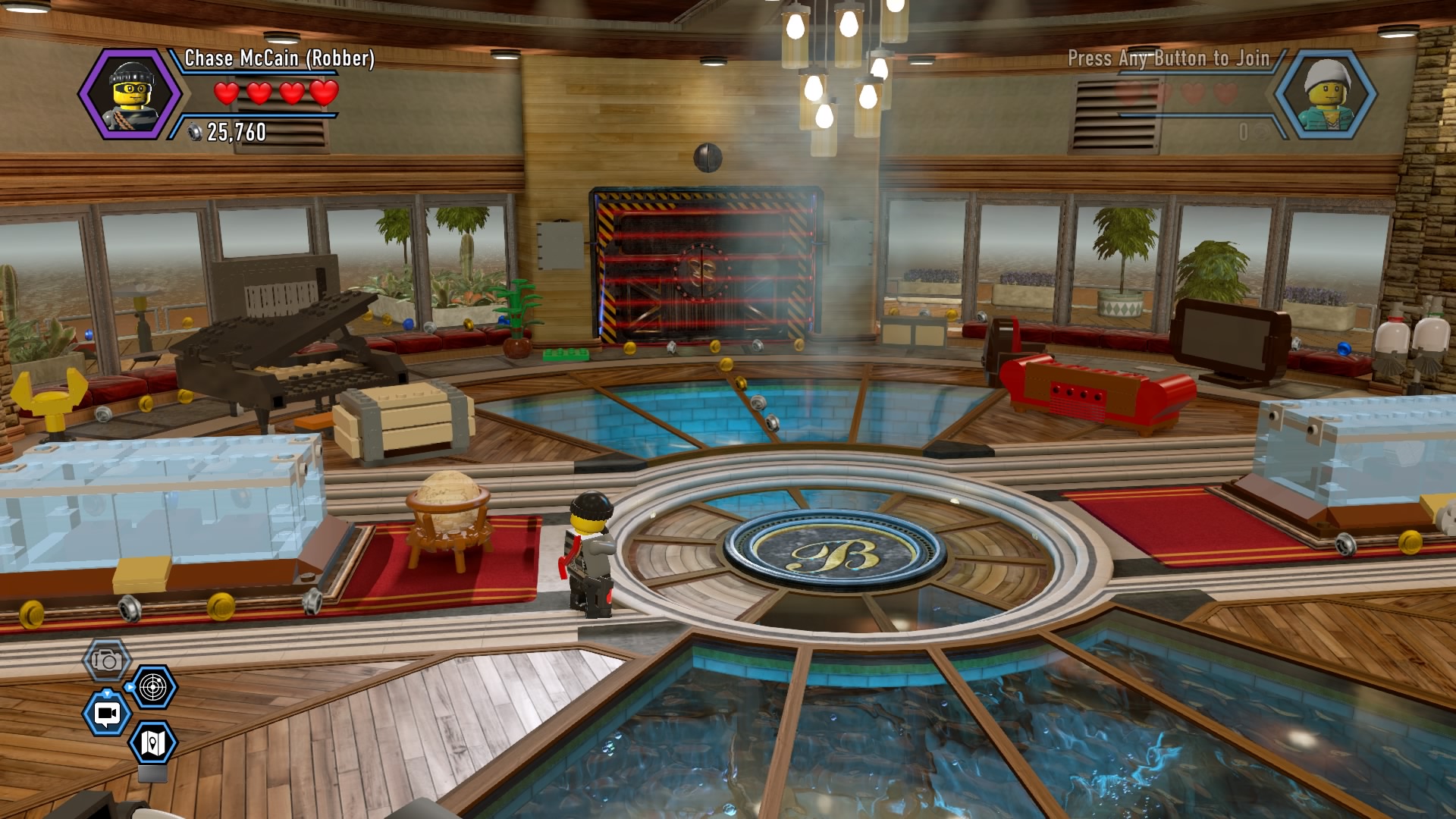 Blackwell’s mansion is very swanky. The place is beautiful, but you’re not here to sight-see. The giant vault is visible in the back wall, but opening it is less obvious. To begin unlocked the giant vault, look left for a huge portrait of Blackwell above a fireplace. Climb up and hook the grapple point, pulling down the painting. The portrait falls and smashes the glass LEGO case below, revealing a Detective Scan spot. Use it to find hopping bricks that create a tiny LEGO terminal – use the security pad to reveal one green light.

We’ll return to that green light later. Next, go to the front-right corner and smash the LEGO desk and chairs. Smash everything and grab the hidden LEGO crate, then place it on the marker to the left of the main vault. Build the bricks that appear and use the terminal to reveal both green spots. 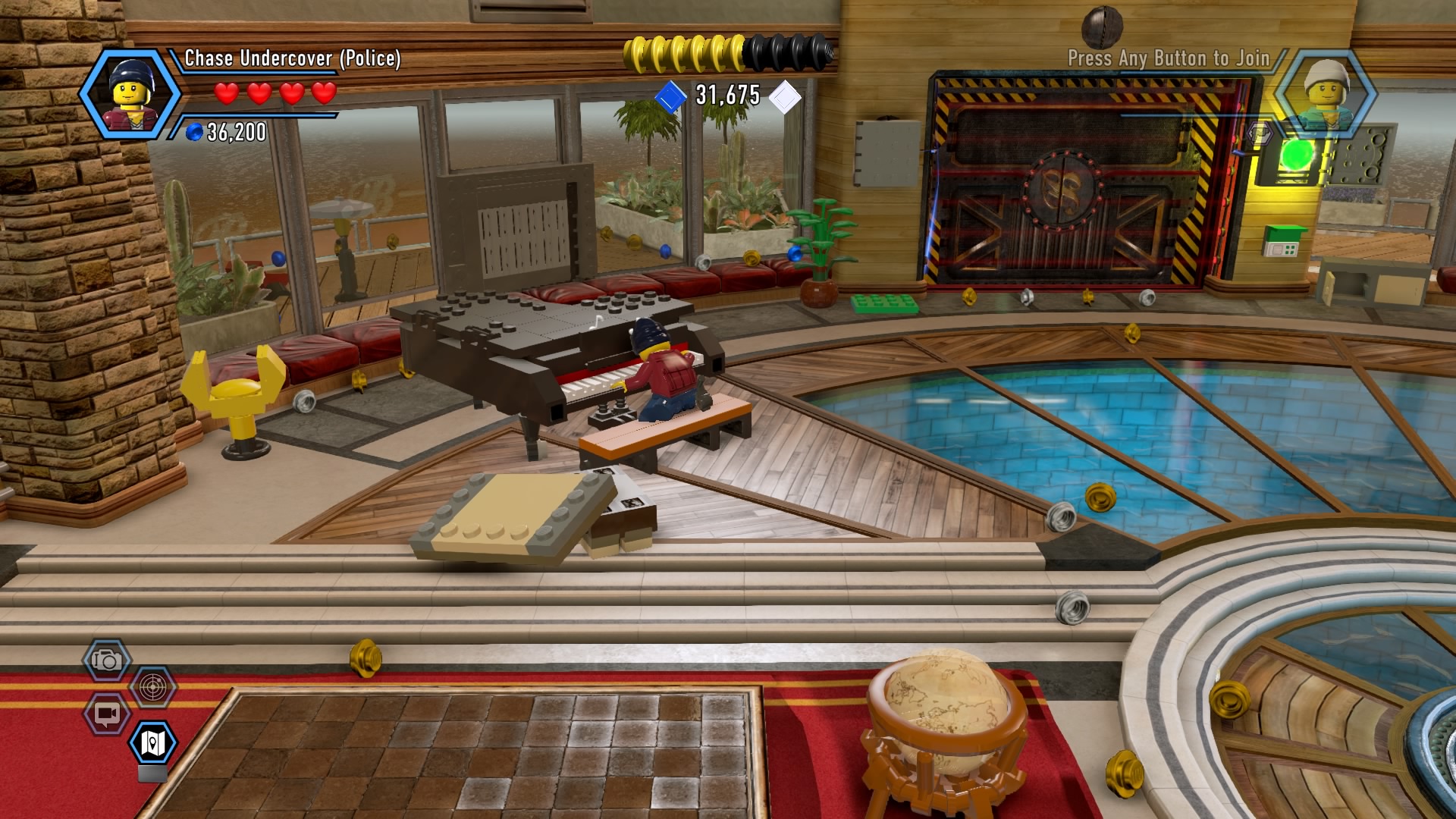