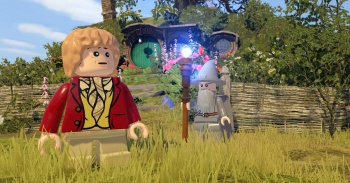 We’re going an adventure in a LEGO-version of Tolkein’s fantasy world.

Warner Bros. Interactive Entertainment, TT Games, and The LEGO Group confirmed today that their next game will be LEGO The Hobbit, confirming an instruction manual image packaged in upcoming Lego sets. The game will follow the events of the first two movies in Peter Jackson’s The Hobbit trilogy, the second of which releases in theaters Dec. 13.

“We are thrilled to depict the characters and environments of Peter Jackson’s Middle-earth in LEGO form with the LEGO The Hobbit videogame,” Tom Stone, TT Games managing director, said in a press release. “Our family-friendly take on these thrilling adventures will have kids and parents playing and laughing together as they build and explore in LEGO Middle-earth.”

Main character Bilbo, the wizard Gandalf, and all the dwarves featured in The Hobbit will be in the game. Each dwarf has his own special “and quite hilarious” ability. For example, Bombur acts a trampoline to bounce people out of danger with his belly.

Players will explore locations from the movies, such as Bag End, The Misty Mountains, and Rivendell. The game will have puzzles, treasure quests, fighting with Orcs, mining for gems and loot, crafting items, and building LEGO structures.

Seeing as how the third movie in The Hobbit trilogy, There And Back Again, takes place after the events with Smaug, there could be a second LEGO The Hobbit game.