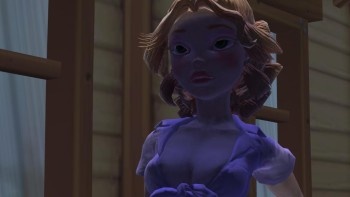 Is it or isn’t it? That’s the question observers are asking as they debate whether or not a promotional screenshot for Leisure Suit Larry: Box Office Bust contains the first nipple-slip in the history of videogames.

It’s difficult to tell from the darkly-lit screenshot whether it’s an odd bit of shadowing at work or if this is in fact a legitimate, albeit digital, peek-a-nippy. It might seem ridiculous – well, who are we kidding, it is ridiculous – but the latest Leisure Suit Larry game looks more like a desperate last gasp by a tired franchise than a potential hit so it needs all the attention-grabbing help it can get. And if we’ve learned one thing over the years, it’s that nothing gets headlines like surprise boobs.

Box Office Bust is, unsurprisingly, far more risqué than its Al Lowe-created predecessors but given how videogames have changed over the past two decades it’s also far less remarkable than those late-80s releases for pushing the envelope. All-out nudity and sex would never fly, of course, but maybe this is Codemasters’ way of slipping one in by slipping one out. So the question remains: Is it or isn’t it?

Dead Rising 2 to Have Most Characters Ever