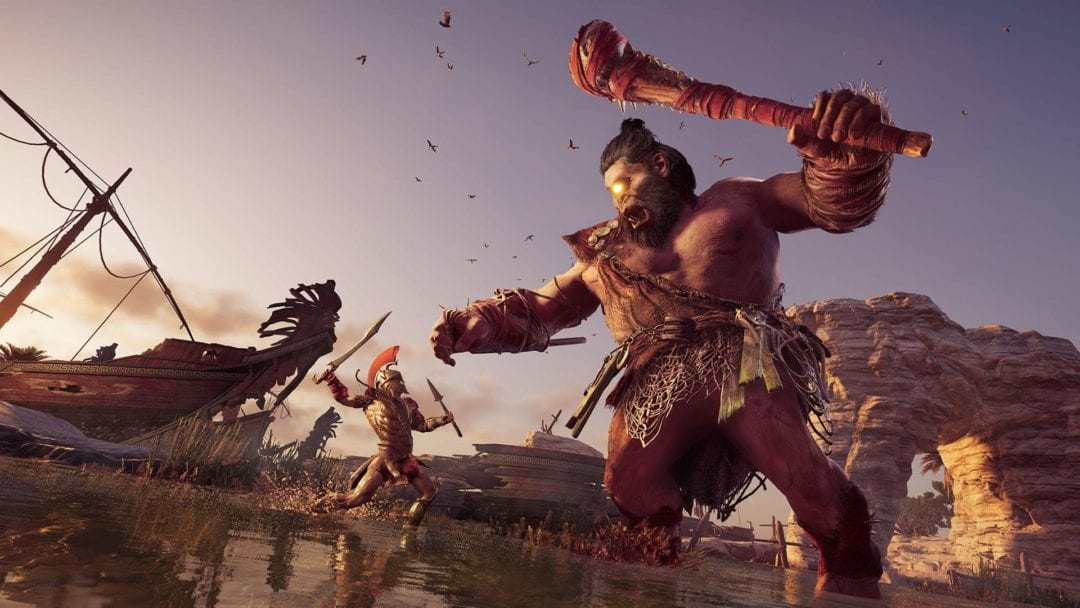 Cast your mind back just a few weeks and you may remember that you were mad about Assassin’s Creed: Odyssey and its rather obnoxious microtransactions.

While complaining about microtransactions in full-price, AAA releases is both completely fair and completely boring by this point, the griping about Odyssey quickly took on a conspiratorial tone. Many felt that the game’s relatively high level requirements for late-game story content and stingy distribution of experience points were part of a deliberate ploy to make the game’s XP gain-boosting microtransactions more appealing. I’m told the problem has since been addressed via a patch released mere days after the month-long launch window in which the game will make most of its money. Still, during that heady month of palpable rage, many people earnestly argued that Ubisoft, the world’s premiere purveyor of open-world, laundry-list simulators, had made its latest game arduous and boring on purpose to make more money.

To which the obvious response is, “yes, yes it did.” But that has nothing to do with microtransactions.

It did it because that’s what Ubisoft does. Ever since it discovered the goose that laid the golden egg with Assassin’s Creed II, the company has been dutifully taping beaks and feathers to every AAA franchise in its portfolio. Those that can’t be converted into open-world collect-a-thons, multiplayer money-spinners, or somehow adulterated with lucrative digital economies have been shuffled out of the limelight. The company still puts out some excellent, small-team, faux-indie titles every once in a while, but even the most ardent corporate ball washers have to admit that Ubisoft’s recent AAA efforts fit into a very well-defined mold. The more cynical might point out that mold seems to involve about 15 hours of game spread over 60 hours of “content.”

And I mean fair enough. For a lot of gamers, the maximum number of hours they can squeeze out of a game before they run out of “stuff to do,” is a hugely important factor in their purchasing decisions. Critics often lose sight of this, perhaps because they rarely pay for their own games, or if they do, it’s just part of the cost of doing business and doesn’t really register on an emotional level. Critics are far more sensitive to having their time wasted than their money. There’s a certain amount of grind inherent in every Ubisoft title because the company has quite rightly recognized that by adding a little filler to the broth it can triple a game’s maximum playtime, making it a little bit more appealing than the competition. Sure, very few players will actually complete all of the content in an Ubisoft collect-a-thon, but they’ll have sunk in a good 30y hours or more by the time they’re sick of it. That’s a good deal if you’re looking for the video game equivalent of comfort food.

The only problem was Ubisoft’s recipe was a little out of date. When the franchise underwent a “radical,” change with Assassin’s Creed: Origins, I wasn’t particularly surprised to learn that said radical change involved a switch to an uninspired over-the-shoulder combat system complete with Dark Souls-ian clumsiness, and an “RPG-like” leveling and gear system. That last addition fits Ubisoft’s modus operandi perfectly. Leveling systems are popular, nigh-standard in the current AAA space, add a great deal of what is commonly mistaken for depth, and are profoundly addictive from a game design standpoint.

Traditionally, your “progress” through a single player game was marked by a rising difficulty curve, challenge spikes in the form of bosses or hard enemy encounters, escalation of the narrative stakes, increasingly grand level design, and the careful, deliberate doling out of new weapons and abilities. It’s a subtle art that naturally requires a ton of balancing and tuning, even in quite linear, rigid, games. The more stuff a game has, the more work there is to balance it, and in most cases, the sloppier it becomes. Putting that balancing the hands of the players via a leveling system just foists the responsibility for a system that can never truly be balanced onto the player. That boss too easy? Clearly you stabbed too many templars. Too hard? That’s what you get for picking the flower arranging tree. Git gud.

But apparently we love it. Player choice! That satisfying, “DING!” Different builds! A concrete sense of progression that isn’t reliant on quality level design, difficulty scaling, or any of that  difficult, subtle game design stuff that doesn’t really work in true open-world games. A sword that does 100 damage is obviously better than a sword that does 10 damage. It’s 10 times better. That’s math, son. It might make that upcoming boss battle impossible to balance properly, but it’s objectively 10 times more exciting!

The thing about leveling systems is they make perfect sense in games with abstract combat systems that lack the mechanical depth to convey escalating stakes through gameplay. In a traditional RPG, designing your character and gaming the leveling system pretty much is the combat system; it’s where all the important decisions are made. The bit where you click on goblins to blow them up with fireballs is usually, but not always, perfunctory. But in modern action games, or “action-RPGs” as we’ve come to call games where you can hit enemies with more than five differently colored swords, which skill tree you invest in feels less like an important decision that radically changes the way you approach the game, and more like a condescending reward or excuse for bad, repetitive content.

Now perhaps you think I’m using this topic to bash Assassin’s Creed because it’s a bad franchise for bad people, and that’s fair, so let’s talk about a game I really like: The Witcher 3: Wild Hunt. The Witcher 3 is an incredible technical and narrative accomplishment. Truly marvelous. The quests are beautifully written, almost perfectly paced micro-adventures that always build towards satisfying climactic battles. Which for me invariably ended in roughly five seconds because, despite playing on the hardest difficulty and using a mod that cut my experience gain by three quarters, my version of Geralt was an angry tornado of swords that bounced around ancient tombs and bandit camps spewing fire like an angry silver-haired Beyblade. Somewhere around eight hours in, the game stopped being a dark fantasy adventure full of political intrigue and high drama and became a particularly well-written episode of Will It Blend? The Witcher 3 is full of hard choices, but the hardest one is picking something on the skill tree that doesn’t completely break the game. It’s a cheap shot, but I’m also confused as to why a seasoned witcher like Geralt, who is now well past his brief, bad-writing-induced episode of amnesia, needs to learn how to swing a sword 5% harder.

Am I arguing that The Witcher 3 would have been a better game sans the leveling system? Yes.  But it also would have been a much shorter one. I suspect players would be less keen on clearing out 4,000 bandit camps if they weren’t awarded with character upgrades.  But a huge chunk of the game was just guff anyway. It was long enough without playing for time.

Even divorced from the concept of leveling up and experience points, hard character progression systems are often just playing for time. Did Doom really need locked armor and gun upgrades? No, not really, but those levels took a long time to make and anything that keeps players in them longer, even if it’s raking around for robots and Funko Pop! toys, is worth it (though as far as dumb collectible goes, those toys were hilarious). Honestly, give the way undersold Arcade Mode a shot; you’d be amazed how much better the game is when played as a pure shooter. Everyone accepts Devil May Cry is miles better when you’ve unlocked all of Dante/Nero’s abilities. What most players think of as the end game is really just the beginning as far as DMC fans are concerned, but we still have to run through the rigmarole of unlocking moves that are vital to the experience every game. Are you surprised that Capcom is selling players the opportunity to skip that grind in the upcoming Devil May Cry 5? I’m not.

But players like leveling up. They love filling buckets. They like seeing bars go up. They like seeing numbers increase. It’s a well-documented phenomenon, and while it’s obviously a big factor in the addictive quality of most RPGs, it also plays an important role in the success of most modern shooters. Call of Duty 4: Modern Warfare wasn’t the first multiplayer shooter to shoehorn a leveling system into an otherwise traditional multiplayer experience, but it was certainly the first to capitalize on it. Even “purer” multiplayer games that reset the game state by necessity at the beginning of each match have broader progress systems, be it in the form of global ranks or unlockable skins. That feeling of progress, of something to be earned, is a far easier sell to most players than the nebulous concept of getting better at the game. The idea of concrete, measurable progress in the forms of levels, ranks, and other nonsense has come to replace the sense of satisfaction we get from good game design.

And there’s your problem. The manipulative game design practices used to get you to invest time in a game can also be used to get you to invest money. The more granular developers make their progress systems, the easier it is for them to sell you those individual parts. Well-designed, lean video games have no space for microtransactions because every element of those games is vital to the overall design, and cutting them out to sell separately leaves an obvious, damaging hole in the gameplay experience.