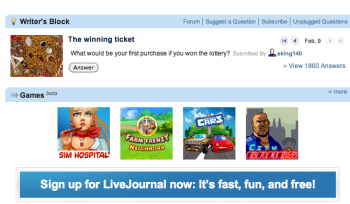 LiveJournal is finally getting in on the casual game market and adding titles to its website.

When it comes to killing time on the Web, going to LiveJournal probably isn’t at the top of many folks’ lists these days. It’s certainly not where people would go if they wanted to play some free web games. It seems, though, that LiveJournal is finally taking a note from social networks like Facebook and MySpace: it’s adding social games to its community.

LivJournal announced today that it’s partnered with i-Jet Media and launching games on its website, which are currently playable. According to the announcement, “LiveJournal will cater to its broad userbase by offering a select variety of high-quality multi-player games.”

The games on the site are currently in a beta mode. According to Anjelika Petrochenko (General Manager of LiveJournal, US), “This beta version of games is just a starting point for LiveJournal. We look forward to expanding upon this initial offering with a growing suite of social games to suit our users’ eclectic interests.”

While LiveJournal isn’t nearly as big as sites like MySpace or Facebook, it does still have more than 21 million users. Adding games to the service makes sense, since they can help retain members, but I’m honestly not sure if this move will bring in a lot more new traffic.