Oh no, here goes Shamus again on one of his crazy howling rants against modern graphics.

Not quite. Humor me for a minute.

I trust you’ve read what Yahtzee had to say last week on the whole 2.5D thing and the resurgence of two-dimensional gameplay that we’re seeing after more than a decade of having mainstream games that followed the mantra of “all 3D, all the time.”

I’ve spent the last fifteen years working professionally with 3D graphics in various ways, from modeling to level design to programming. Most of the computer games I own are in 3D. If I ever get the chance to make my ultimate dream game, (don’t pretend you don’t have one too) it will also be 3D. Allow me to indulge in a bit of hypocrisy and say that even though I’ve made 3D in the past, am working on 3D now, and would like to work on 3D in the future, I think the “all 3D” trend is unfortunate and I’d love to see more 2D games. More to the point, I think a fresh infusion of mainstream 2D games would be really healthy for the hobby.

Publishers seem to be searching around, looking for a gameplay mechanic that acts as a good hook and can turn their short graphics demos into the Next Hot Thing. But they might do better to look backwards because there were a lot of fun ideas they discarded when they decided that wrestling with camera controls should count as “gameplay,” and that the problem with Sonic series was that it didn’t have enough dimensions. I don’t know why things went this way. We managed to invent the automobile without throwing away all the bicycles, why couldn’t we have 3D games without giving up the 2D ones?

Not every game was ruined by moving to 3D, but they all seem to have lost their identity. There is no denying that Prince of Persia: Sands of Time is a fantastic game, but the gameplay is nothing like the original. Likewise, Super Mario Galaxy was a lot of fun, but it’s a completely different game than Super Mario. Same goes for Metroid. The new games are unquestionably fun and I’m glad we have them, but… can’t we have the old ones too? What about fans of those bygone titles? There are only so many times you can replay the originals and still get something out of them. While flash games might offer a similar experience, they lack the production values and polish that made those old 2D titles into classics.

Note that this discussion always has a lot of confusion because sometimes people mean different things when they say “2D games.” There are games that use 2D graphics: The Super Mario, Prince of Persia, and Bionic Commando of old. Note that I would also classify top-down games like Diablo and StarCraft as 2D graphics because the gameworld is drawn with 2D tiles and it would be impossible to change the camera angle. Then there are games with 2D gameplay: Shadow Complex is a recent example of a game that preserves the essence of 2D gameplay while making the leap to 3D polygonal graphics. I’d also include Wolfenstein “3D” in the titles with 2D gameplay, because you never had to worry about moving, looking, or shooting up or down. 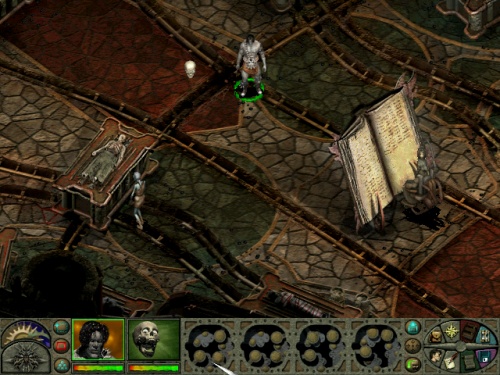 There are nice things to be said about 2D graphics. The 1999 classic Planescape: Torment had huge, richly drawn 2D backgrounds. It wasn’t made from repeating tiles, but by hiring an artist to paint these digital spaces. The result is a world rich in detail and unique character. No two areas will be exactly the same, right down to each square meter of floor being completely unique. Such a thing would be incredibly difficult to pull off in 3D. (Although the virtual texturing in the upcoming Rage might make this sort of endless variety possible again.) I wouldn’t want all games to use the Planescape approach to visuals. Or even a lot of games. But I also hate to see that approach to gameworld go extinct entirely, because it really was beautiful.

While 2D graphics sometimes have charm, they’re nothing compared to the possibilities of 2D gameplay. It’s nice to be able to enjoy a game without fighting with camera controls. There is something pure and elemental in a 2D game. Adding one more dimension usually has the effect of doubling the complexity of the controls. Super Mario had the most desirable quality: Easy to learn, hard to master. A lot of modern 3D games have controls of dizzying complexity for moving and looking along all three axis, and buttons for dealing with the fact that important things are so often off-screen. But once you get the hang of the controls, you’ve learned 90% of what you need to know to master the game. Hard to learn, easy to master. I think this is a big reason why newer titles don’t quite have the replay value that the classics did. You can keep playing, but in many cases the experience is the same every time. What’s the point?

Another important thing about 2D games is that they’re way cheaper to produce. I defy any company to make as much content and gamespace as they had in those old side-scrollers. Super Mario could afford to give players more content than they could handle. The core game was long and diverse, and then there was a massive side-helping of hidden stuff and bonus levels. 3D games don’t do that. They can’t afford to make half the content “optional,” because then the games would be about two hours long.

No, I don’t think we should abandon 3D and go back to 2D games. I just think a mix would be nice. Bring back the side-scrolling action games, the top-down shooters, and the the isometric dungeon crawls. Those games would still be fun, and could look amazing with modern production techniques.

Now your turn: What old 2D game really needs to be resurrected and given another chance?

Shamus Young is the guy behind this movie, this website, this book, these two webcomics, and this program. He was partial to the Eye of the Beholder series, which is never coming back.