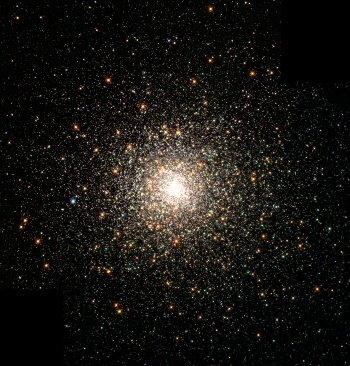 If life-bearing planets can form in globular clusters, they have the best chance of creating the spacefaring extraterrestrials we imagine.

Let’s say you’re trying to find sentient alien life. Where do you start? All the research suggests multiple civilizations are scattered around the universe, but finding hard evidence has proven difficult. But according to a new study, we might have luck focusing on globular star clusters. Not only could these regions contain more Earth-like planets than scientists first believed, those planets would be fairly close together – meaning interstellar communication suddenly becomes a possibility.

“We call it the ‘globular cluster opportunity’,” Rosanne DiStefano of the Harvard-Smithsonian Center for Astrophysics explained. “Sending a broadcast between the stars wouldn’t take any longer than a letter from the U.S. to Europe in the 18th century. Interstellar travel would take less time too.”

Globular clusters are densely-packed regions of space, carrying up to a million stars within a hundred light years. Out own Milky Way has about 150 of them, most of which reside in the galaxy’s halo. Scientists previously argued these regions couldn’t house planets, because stars are packed too closely together and lack the heavy elements that form habitable worlds.

Perhaps the most interesting detail is that globular cluster aliens would have the best chance of forming a space-based civilization. The closest star to our solar system – Alpha Centurai – is 24 trillion miles away from Earth. But since stars in clusters are much closers, probes and ships would only need to travel one trillion miles before reaching another system.

“The Voyager probes are 100 billion miles from Earth, or one-tenth as far as it would take to reach the closest star if we lived in a globular cluster,” DiStefano notes. “That means sending an interstellar probe is something a civilization at our technological level could do in a globular cluster.”

Of course, finding alien civilizations in globular clusters is still a tricky prospect. Our closest cluster is thousands of light-years away, making it hard to spot planets among the densely-packed stars. That said, it might still be possible to locate planets on the outskirts, or have SETI scan for possible radio or laser broadcasts. Perhaps it’s a long shot, but who knows? Maybe in a decade or so we’ll discover alien life that actually managed to colonize the stars.