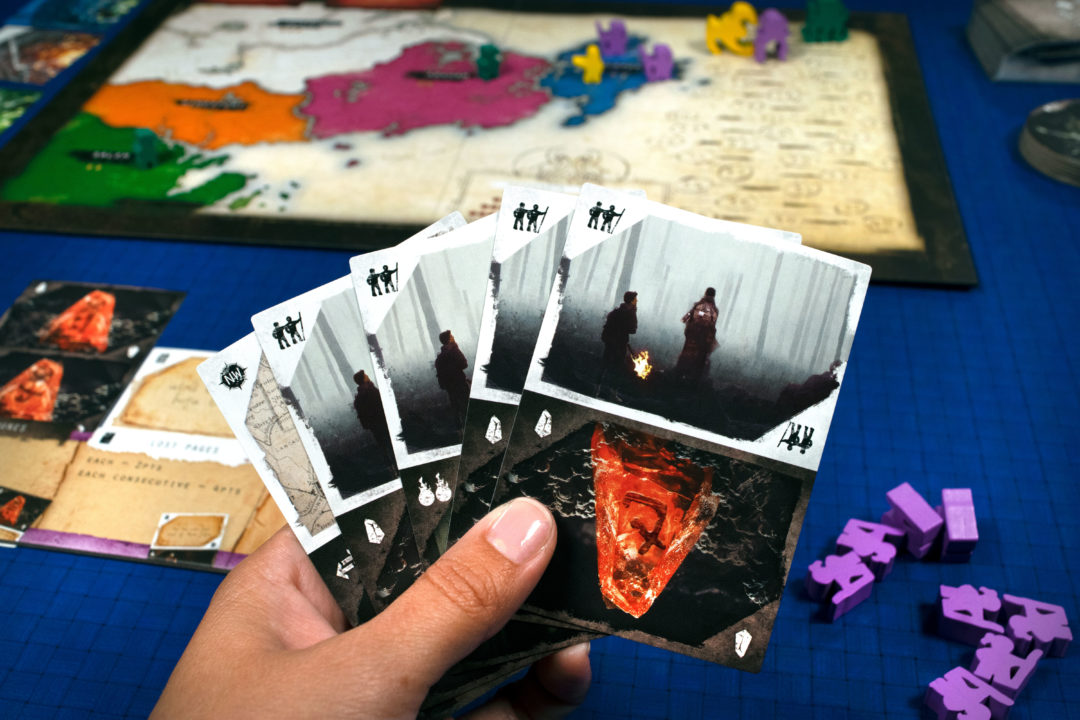 There are numerous board games based on the works of H. P. Lovecraft where players take on the role of brave, if somewhat damaged investigators, looking to protect the world from horrors invading from beyond space and time. Renegade Game Studios’ Gates of Delirium is not one of those games.

By the time you start playing, your characters have already lost their grip on reality, driven mad by their search for truths mankind was not meant to know. They can try to cling to sanity and keep collecting lore, but they’ve also begun gathering ancient runes and opening gates to unleash monstrosities from another world.

Two-to-four players compete to rack up the most points through collecting resources like runes, map fragments, and the lost pages of a secret tome, or opening gates and feeding hapless investigators to the horrors that emerge. Players start with five cards, each of which has a different effect depending on whether they’re played by a character who’s sane or insane.

Each round, the first player decides what the table’s mental state is. That choice is likely to be determined based on the state of the game board and their overall strategy. While sane, you can gather lost pages and map fragments that are worth points at the end of the game, or place investigators on any of the five zones of the board. The investigators will reward you with points if a gate is opened at their location. They’ll then be cleared away, having presumably been eaten. 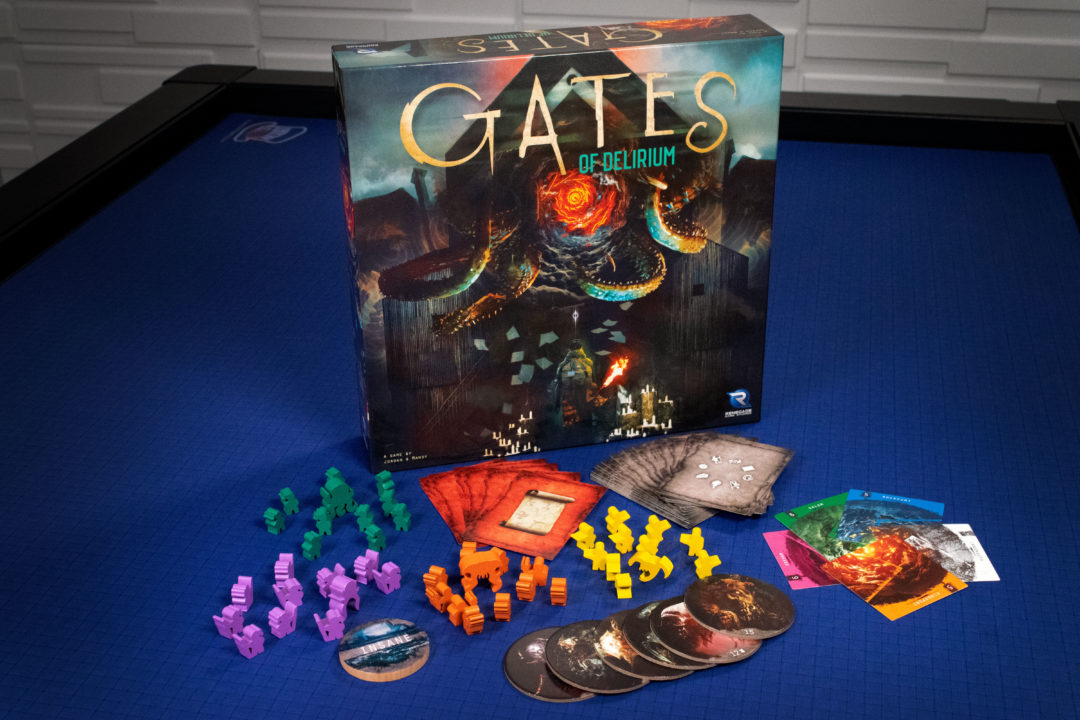 The number of points you earn in Gates of Delirium is based on who controls the most investigators in a given area of the map. You won’t get any points if you don’t have a presence in a zone where a gate opens, leading to a sort of tactical arms race as players try to spend the minimal amount of resources to secure their dominance while also avoiding getting left out.

This is complicated by the fact that insane players can convert other people’s investigators to their cause. You also have to be insane to gather gate fragments, with the areas that award more points requiring more resources to build. Only four fragments are available to collect at any given time, and each gate is built individually through lining up five-to-seven cards in a dramatic brightly colored circle with a spot in the middle to hold the monstrosity you’ve summoned.

That means players are constantly trying to plan based on what everyone else is working on building. You can try to interrupt someone’s progress by grabbing pieces of the gate your opponent is assembling, but if you have investigators in that zone, you might want to just leave them be and enjoy the fruits of their labor. But even dominating the biggest section of the map when a gate opens isn’t going to get you as many points as completing the gate yourself. That disparity gets even greater later in the game, when the biggest monstrosities start emerging. When all six of the monstrosities have invaded, the game ends and players add up their scores to determine the winner.

The game encourages two distinct play styles. Aggressive players tend to spend just enough time sane to get some investigators on the board so they can earn some extra points from their primary activity: opening the gate and rushing towards the end of the world and the game. The other play style involves building up resources that are worth points at the end of the game while trying to undermine the gate opening to keep the game going longer. 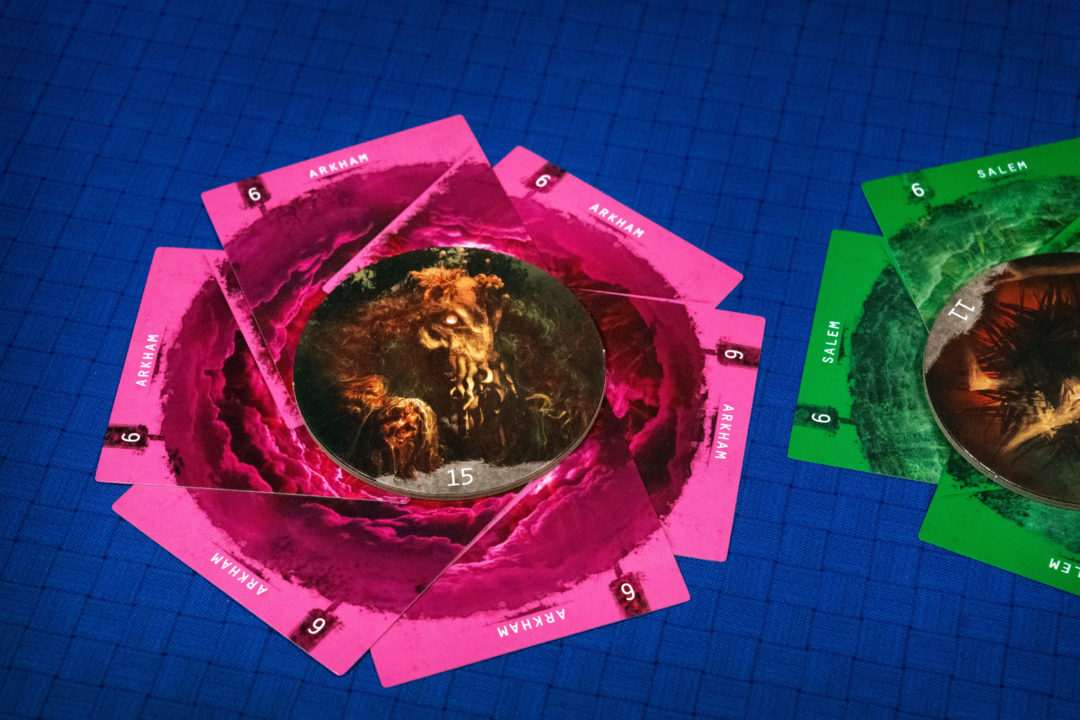 The aggressive strategy tends to pull ahead so quickly. It got to a point where I had to desperately slow down my gate-happy husband because the next one to open would win him the game, no matter who actually opened it. The good thing about taking turns choosing whether everyone’s sane or insane is it’s a way to put the breaks on someone else’s plan or at least push them into suboptimal actions. More passive players are also given ways to catch up since three of the monstrosities come with random effects that change the rules, like giving an extra point award for having the most scroll fragments or letting you also get gate fragments when you collect runes.

Moving between mental states also makes it harder to plan ahead, since you have so many variables to consider. Completing a set of map fragments while sane can earn you significant points at the end of the game, but when you’ve been insane for two rounds in a row it can be really tempting to play the card for its alternate ability. More than once, one of the players forgot to consider the second side and played a card they’d meant to save by mistake. The mechanic is similar to ones used in Android and Twilight Struggle, but Gates of Delirium has the advantage of being much quicker to play and learn than either of those games, clocking in at about an hour.

The cards also aren’t created equal. Some will get you two investigators or gate fragments, while others will give you one and a desperation token. These can be spent on special effects like drawing and discarding cards in a bid to improve your hand or reshuffling the gate fragments to try to get the one you need at the moment. That last ability was critical in my game, when I managed to eke out a narrow victory by finishing a gate to summon the last monstrosity just a turn before my husband did. That required a gate fragment that wasn’t on the board, and dealing out the fresh options was a super tense moment.

Most protagonists in Lovecraftian stories are doomed to madness and failure, and Gates of Delirium puts a novel twist on the material by having players just embrace that destruction and fight to be the person laughing loudest while the world ends. The highly entertaining flavor, clever mechanics, and excellent physical design make it a great way to turn cosmic horror competitive.