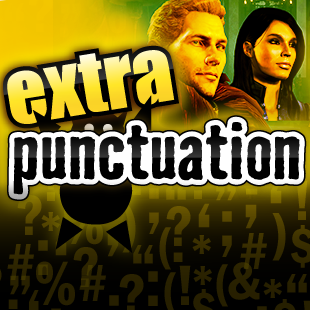 I know this is reaching for a low-hanging fruit I have eaten before and sicked back up onto an even lower-hanging branch, but Bioware games still have the problem of Bioware Face, and if anything, the advance of graphics technology is only making it worse.

If you’re not familiar with Bioware Face, it refers to how characters in Bioware games (such as Dragon Age and Mass Effect) always look and sound incredibly wooden during dialogue scenes, their words disconnected entirely from the physical movements and gestures that their bodies make. I am yet to play a Bioware game that didn’t eventually force me to resort to switching on subtitles, speed-reading the lines and skipping the voice clips before I can zone out from complete disengagement.

And I thought I knew why this was the case. The best way to make dialogue and character animation sync up naturally is to kit the voice actors up in mocap gear so you can record the voice and the motion at the same time, there are uncountable subtle tics and motions people make as they speak that even the highest-trained animator would have trouble coming up with spontaneously. And obviously that isn’t practical with games so massively dialogue-driven as Bioware’s. If you tried to do all the mocapped voice lines in one session then they’d start to get a bit ragged by the end as the actors die off one-by-one from lack of food, water or sleep.

So instead, Bioware games have to rely on a repertoire of pre-baked animations and poses to attach loosely to the dialogue lines, and that’s where this sense of woodenness comes from. But you know what, I think that’s making excuses. I think even pre-baked animations could be less awkward than they usually are in Bioware games. There may be a problem in that, when you set out to create an animation specifically designed to convey anger, there’s a tendency to exaggerate the anger since it’s what you’re required to focus on, and most people, when acting natural, tend to be more subtle when physically expressing their emotions.

The solution of assigning an angry animation to play when someone says an angry line is also predicated on the idea that a single dialogue line can only convey a single emotion, and that people can only express one emotion at a time. People are, in reality, far more complex. It’s possible to be pleased, for example, because your friend has just won a trout fishing competition, while simultaneously being a bit fidgety and grouchy because you’ve had to sit on a damp bench for three hours.

And as I said, the improvement in technology only seems to be making this more obvious. The artists and modellers can create near-photorealistic faces down to the pores and sweaty glisten, but then they have to start animating, and we immediately drive straight down the Uncanny Valley. Because now there’s pre-baked facial animation to go with the gesturing limbs, and frankly, in Dragon Age Inquisition especially, it’s fucking hilarious. Whenever a character has to deliver a line designated ‘sad’, their eyebrows slant up and the corners of their mouth plunge down, and you can practically hear the squeal of the hydraulics in their facial muscles. I can’t help feeling they’d have been better off keeping everyone’s faces rock solid and claiming that they’re just feeling really stoic about their recent Botox injections. 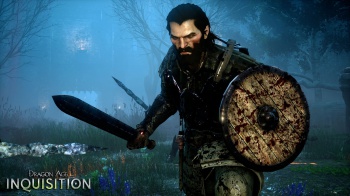 Other things that contribute to the Bioware Face effect include the way characters maintain fixed eye contact as they address one another, which is something people only do if they’re in love or from space. And although we don’t usually see both parties of the conversation in one shot, as the camera just switches back and forth between mid-shots of whoever’s speaking, on-screen characters are usually staring gormlessly into the middle distance, and that gives the impression of maintaining eye contact.

Also, I always think it’s a little strange the way Bioware games keep the background noise and idle animations playing while it’s waiting for you to pick the next conversation option, so we get the impression that the Inquisitor has the mental dexterity of a severely hungover slug and will stand in awkward silence for up to a minute waiting for the wheels to turn in their head. While everyone (s)he engages in conversation is polite enough to wait for the process to complete, including the villains who are about to start a climactic battle. Giving the impression that time was paused, perhaps with a change of audio and a screen filter, might help in a small but significant way.

Basically, I feel that conversations in Bioware games add more and more animations and graphical improvements with each installment, but don’t seem to be getting any closer to a level of engagement that conversation styles in other games have already achieved with considerably less effort. For example, a lot of visual novels, or games with visual-novel like dialogue, will just accompany each line with a still image of whoever’s speaking, with a number of variants for different emotions. Somehow, that manages to be a hell of a lot less wooden. Perhaps because our expectations have been lowered. Then there are the tiny low-res character sprites in Final Fantasy 6, that emote in cutscenes by momentarily changing into a different sprite with big boggle-eyes and cartoon sweat drops, or having the sprite jump briefly up into the air, and it’s still more engaging than Bioware Face.

Maybe if your dialogue hasn’t been recorded with natural-looking mocap then it doesn’t make sense to accompany it with natural-looking graphics; the more photorealistic you get it, the further it will sink into the Uncanny Valley. You can hide the wires, you can hide the body of the puppeteer, you can sync the voice acting up perfectly with the mouth movements, but sooner or later we’re going to suss out that Cookie Monster isn’t real. There’s no hole in his throat for the cookies to go down, for a start.