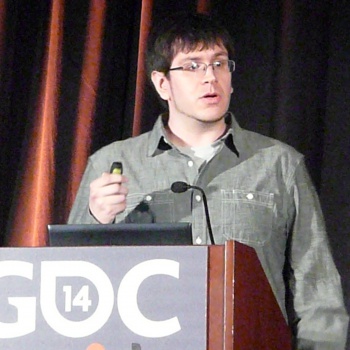 Making non-player characters move and act in ways that make sense is a rare talent that involves foresight and planning.

Sure, the player moves smoothly, and the major speaking roles of other characters are believable, but how many times have you been playing a game like Skyrim or Thief and the movements and animations of the non-player characters (NPC) just don’t make sense? That drunk guy wouldn’t just shamble forward without stumbling back and forth, or that guard should have more purpose in his patrols.

It’s even worse when you get into fantasy or science-fiction games and see an inhuman monster act too much like an intelligent person walking in a straight line. Animators need to think about the way these NPCs are portrayed but they often don’t have the time and resources budgeted to the main characters to make that work. Mike Junbluth, an animator who has worked on such games as The Elder Scrolls Online and the forthcoming Shadows of Mordor from Monolith Studios, has an answer. He outlined his system at a talk at GDC 2014 called “Establishing an Ecology for NPCs.”

Ecology may sound like an odd word to describe the actions of characters, but Junbluth uses a pretty broad definition. “When I say ecology, how a character fits into the world,” he said. Like a lot of technical game artists, Junbluth said creating an ecology that feels right is all about forethought and planning. During his talk, he gave several guidelines and practices to help think about the non-player characters in your game and how they might act.

First, he brought up a slide that showed Mazlow’s Hierarchy of Needs. This is a triangle-shaped chart created by the psychologist Abraham Mazlow in 1943, which maps the kinds of needs that dictate the behaviors of people. For example, eating and sleeping are on the bottom and are the most basic needs, while the need for community or belonging is closer to center, meaning that only becomes important if the basic needs are met. Junbluth said game developers and animators can use this chart to plot where the enemies in games might fall.

He did this using an example we all know from games, “the holy trinity of undead monsters”. Zombies are feral, hungry creatures so they don’t go beyond the first level of physiological needs – all they want to do is eat your brains. Skeletons are typically more militaristic, serving as a guard or a soldier, so they fall into the second category of “safety” more than any other. Ghosts don’t have either of those needs, being the ephemeral spirits of the departed, but they often want resolution from some familial member or lover so they fall into the “Love/Belonging” strata. Junbluth marked each of these typical NPC groups with the same color as their entry on the chart, and in that way, their intentions and objectives became “instantly more clear” and easily communicated among the animators working on a particular game.

Junbluth outlined other ways to chart NPC behaviors, such as relative intelligence, alignment, and typical paths these creatures might take. Take a look at the images above to get a sense of how thorough Junbluth is. He encouraged animation teams to have a single piece of paper – a “one sheet” – prepared for each character group with all this information in easy-to-digest visual form. That way, each team member can glance at the sheet, and know that every other member is on the same page. Hehe.

To think that these practices aren’t standard in the industry was a bit surprising, honestly. I come from a theater background so the concept of disseminating information to a large group of people in a creative collaboration is ingrained in me. I have to remind myself that the video game industry is still in its early stage, and that these practices will evolve over time, but I’m glad that developers like Junbluth are acting as pioneers in establishing proper ways to communicate creative ideas.