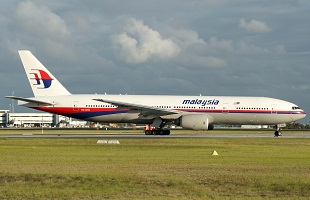 Malaysia Airlines flight MH17 had 280 passengers and 15 crew members on board.

Malaysia Airlines flight MH17, en route to Kuala Lumpur from Amsterdam, has crashed in the Ukraine. The jet was carrying a full load of passengers (280), along with 15 flight crew members. This doesn’t appear to be a crash caused by malfunction, as reports are coming in that a Buk surface-to-air missile Reports out of Moscow “suggest the plane came down in the Donetsk region, where there has been recent heavy fighting amid continuing tensions between Russia and Ukraine.” 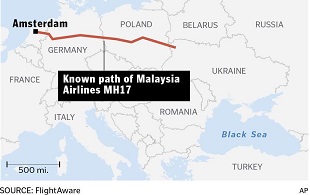 The image to the right shows the approximate flight path of MH17 before it crashed (larger version can be found here).

The Buk surface-to-air missile, or Buk Missile System, was introduced by the Soviet Union in 1979. The various implementations of the system all include a 150-pound warhead, sitting atop a 5.55m (18-foot-plus) missile. The missiles can reach targets up to 46,000 feet in the air, with a typical operating range of 18.6 miles (30km). The Buk system uses vehicle-based launchers, as the missile is too large to be shoulder-fired. There are both ground- and water-based launching systems.

Boeing has issued a statement about the crash: “Our thoughts and prayers are with those on board the Malaysia Airlines airplane lost over Ukrainian airspace, as well as their families and loved ones. Boeing stands ready to provide whatever assistance is requested by authorities.”

Sadly this is not the first tragedy for Malaysia Airlines in 2014. In March, contact with flight MH370 was lost an hour after takeoff. Searching for the plane has recently been focused in the southern regions of the Indian Ocean.

The Game That Turned Little Kids Into Cannibalistic Hyenas