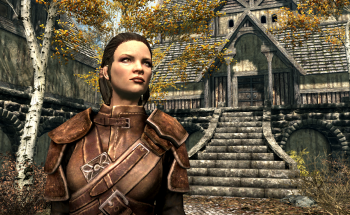 I don’t know if it’s the difference in religions (he was reluctant to get married in my church), or the difference in race, but it’s not going well. Maybe he wanted children. Maybe it’s because I asked that we move into one of my houses.

I can’t hide the fact that I’m wealthy and have five houses and he lives in a tent. And I admit I never paid him for his help when he spent some time with me on projects, which was when we fell in love. He never asked!

The worst part is going to be telling my bigoted parents they were right. While wood elves and Argonians may be able to make a marriage work, this wood elf and Argonian certainly can’t.

It was magical when I put on that amulet of Mara. He noticed it and complimented it, then the whirlwind romance consisted of him saying he like-liked me, and me proposing marriage, and him being delighted. Then we hung out in Riften for a day. I wasn’t going to be a runaway bride, no-siree.

I admit, I did go hang out in the pub in hopes to trigger “A Night To Remember,” as that sounds like the perfect bachelorette party, but nothing happened except I drank some Nord mead, and Derkeethus followed me around anyway instead of doing his own end-of-single-life hurrah.

Derkeethus. The very name wounds me, strikes me to my heart.

I didn’t ask him if Argonians had stag parties. There was so much I didn’t ask him. I’m ashamed now. Although to be fair, he didn’t ask about wood elf rituals, and I think I deserve some serious props for not adhering to the wood elf tradition of filling an inn room with four strapping young high elves, seventeen cabbages, ale, and mammoth cheese, and seeing what happens.

Argonians hate mammoth cheese. He would not have approved.

So nothing happened that night. The next morning, we went to the temple and, with a casual aside of how he never thought he’d be getting married at the temple of Mara, my love and I were joined by the priest.

After which Derkeethus turned around and left.

I was confused. Had I done something offensive? Did he have second thoughts, and if so, why didn’t he say something before the knot was tied?

Perhaps he went home, although we hadn’t yet decided where we were going to live. I spent weeks going from Riften to Solitude, stopping in every home and yelling out his name. Only my housecarls answered.

And seriously. It seems being a Thane only gets you someone to sit in your house and eat your food and challenge you when you come home. I swear Jordis the Sword-Maiden has Risky Business-like parties when I’m not home. I come home and there are bottles on the floor and half-eaten slaughterfish on the table, and she’s all like, “Oh my Thane, I didn’t expect you home, I’m, uh, your sword and shield, and your burdens are carried, and all that.” Then I look on my mantle and see my crystal egg is cracked.

Anyway. I got Ilona (She doesn’t have a title, so I amused myself by calling her Ilona the Wossname. She didn’t seem to mind) as backup and went hunting for Derkeethus. I felt I was owed some answers.

Finally, after checking all my homes, I went back to Darkwater Crossing and found him there, proudly standing by his tent. In tears, I rushed to him, and he gave me 100 gold and a pie.

I was crushed. I felt like a whore. He might as well have left it on the dresser. 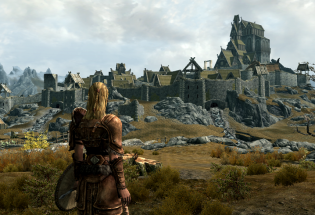 He sounded as if he was pleased to see me, and kept calling me, “My love.” (I’ve told him many times, “It’s Dovahkiin,” but he says, “I can’t say ‘Dovahkiin,'” and then I say, “You just did!” and then he gets sulky. It’s a whole thing.) I suggested we move from his shithole tent to my manor in Solitude, and he said that would be fine.

Yes, his tent is a shithole. Look. I’m not a snob. But when you grow up in the woods and have nothing and then get caught by Imperials and almost executed and then thrown into the middle of a civil war and forced to learn the bow and magic and all this shouting business, when you get a chance to sleep in a real bed, you fucking take it. I love Derkeethus, but when I have five beds to choose from around Skyrim – and that doesn’t even count my bunks at the mage’s college, the Companions, and the Dark Brotherhood – I’m not going to choose a shithole tent.

I didn’t call his tent a shithole tent, not to his face. I’m mad. I’ve been dumped. I believe I’m allowed some anger.

All right. So Ilona the Wossname and I did some adventuring and I made her some armor. I like her. Much less passive-aggressive than Lydia, and less likely to get mad about being set on fire (accidentally!) than Faendal. Then we went to Solitude to get some rest and dump our loot. And I wanted to see my husband again.

The moment we stepped inside the Solitude gates, Derkeethus was in the process of running through town, toward us. My love is coming to greet me, I thought! But no, he paid us no mind as he dashed past us and outside the gates. I was confused and hurt, so I followed him. He ran north, not toward Darkwater Crossing, and eventually got stuck on the side of a hill.

I approached him, nervous and sad. I was thinking, “What the fuck are you doing?” but somehow couldn’t articulate it. He proudly told me the store was doing well, gave me 100 gold again, and another pie. He seemed so happy to be standing there, trying to climb this hill outside of Solitude, pretending as if nothing were wrong between us.

Maybe it was Solitude, I figured. Maybe we should move somewhere less ostentatious, somewhere less likely to make his tent look like a shithole. So I suggested we move to Riften. It’s a long way to walk, and he’s refused every offer I’ve given him to take one of my horses, but he cheerfully started off.

As he traveled across the country on foot (I assumed that was what he was doing,) I began looking in the cities for a marriage counselor. The closest I could get was Aerin in Riften, who drunkenly tried to give me love advice, but I laughed in his face and told him to get back to me when he had proposed to Mjoll the Lioness instead of just worshipping the ground she spills blood on.

Then I found out Derkeethus didn’t go to Riften. He went back to Darkwater Crossing.

I gave up. I don’t know if he has a lover there, or just likes his shithole tent. I don’t know if mining all day is a better life than sleeping with me and playing cards with my housecarl while I risk my life to bring him an expensive lifestyle. Maybe he wants children with an Argonian, maybe he had second thoughts. I know I could invite him to adventure with me again, but frankly, it’s too painful.

Whatever. I’ve moved on. I pawned my Bond of Matrimony to that slimy Belethor and will not return to Darkwater Crossing. He is welcome to his mining and his pond and his lover, if he has one. While I am happy to reside in Breezehome, or Proudspire, or Hjerim, he is content to live in Shithole.

Mur Lafferty is an author and podcaster. Her work can be found at murverse.com.