“I would reveal my true identity, but for political reasons, I cannot. But do not take me lightly, I once scored four touchdowns in a single game for Polk High!” –Al Bundy, first public address as leader of NO MA’AM (excerpt)

If you spend too much time on The Internet, you’re going to miss things happening in the real world. On the other hand, sometimes you get to be ahead of the curve. Just usually not about anything pleasant.

For example, it was apparent in the aftermath of a horrific May 2014 murder-spree in California that a great deal of the American mainstream was hearing about “Men’s Rights Activism” for the first time, owing to the 22 year-old gunman having been found to have associated with various MRA-adjacent websites and spouted rhetoric and buzzwords familiar to observers of more extreme/fringe wings of the so-called “activist” movement. Hence the incredulity in a since at least 1856 and has remained largely unchanged in basic message (women’s liberation and/or feminism are bad, legal/social superiority of men over women is either the natural, God-intended or at least ideally-preferable state of humanity) it never “caught on” in any meaningful widespread way save for a brief run as a catch-all term for legal organizations seeking adjustments to family law – many of which now distance themselves from that specific label (as do other segments of the loosely-defined modern “Men’s Movement.”

That is, until the dawn of The Internet removed geographic boundaries to every niche belief-system, no matter how small, being able to congregate. Though still by no means a mainstream (or even “Internet Big”) phenomenon, MRA rhetoric found a receptive audience in the darker recesses of the web, most uncomfortably in pop-culture and entertainment forums where embittered young men found in its rhetoric a set of derailing terminology and official-sounding words with which to “fight back” against the perceived boogeymen of “feminists” or “political correctness” that dared criticize the films, video games and other entertainments they’d internalized as above reproach. However seriously one takes the purported intellectual arguments of Men’s Rights Activism (speaking only for myself: not seriously at all), it can’t be denied that its cultural presence is mostly about sad-sacks trying to take a baseball bat to some new mile-marker of progress and somehow not noticing that the bat is made of Nerf.

That might make some people think about the futility of fighting the tide of history, or of the Social Media “war” that broke out via the #NotAllMen and #YesAllWomen hashtags in the wake of the aforementioned tragedy in California. For purposes of this column, it makes me think about old TV shows…

Married With Children was “the other Fox comedy” alongside The Simpsons that effectively put a dagger in the heart of the conventional family sitcom in the 90s. But whereas Homer Simpson and his brood aimed to blow the paradigm apart with a (sometimes literal) nuclear blast, The Bundys were all about the entropy of The American Dream: Al (Ed O’Neil) was a star High School athlete who married his teenaged sweetheart Peg (Katie Sagal) and moved to the suburbs to raise their kids on his salary as a salesman – a happy ending, according to television from its inception right up through the 80s… but not anymore.

Al and Peg could barely stand each other. Their kids were walking disasters. Their neighbors were equally-repellant yuppies. And while Al had the bitter, impotent rage against “political correctness” that might land one a multimillion dollar Fox News gig, back then all it got him was more pain and misery for the show to revel in (even as it confirmed that, yes, everyone else really was as annoying as Al observed them to be – Married was basically candied-nihilism).

Al Bundy was an angry man the world had passed by, clinging desperately to his one moment of anachronistic macho glory (he’d once scored four touchdowns in one game while playing football for Polk High) whose anger at his family, friends and himself was really anger at the world no longer bending to the will of everyone fortunate enough to possess a Y chromosome like it had for his father’s generation – and like men of his generation were promised it still would for them. Today, apart from his age he’d be a perhaps too on the nose parody of the reigning image of Men’s Rights Activism (the 21st Century internet’s version, anyway)…

…which is appropriate, because he sort of invented it. 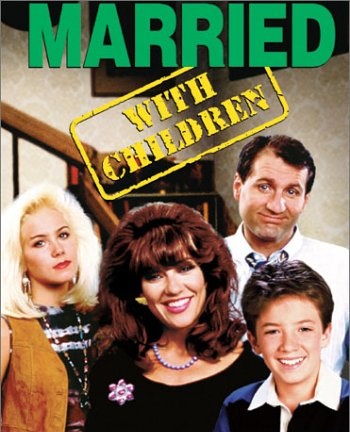 Debuting in the eponymously-titled ninth episode of the show’s eighth season, “NO MA’AM” – National Organization of Men Against Amazonian Masterhood – was a joke built on the basic premise that a male counter-movement to feminism was inherently ridiculous, and would mostly wind up being a pack of self-consciously emasculated losers (read: Al and his fellow middle-aged sad-sack pals) barking out the common gripes of the beer gut set in the language of “activism.” Sample rant: “Every day for the past 30 years you high-heeled pitbulls have blamed us for everything, from not being able to get into Harvard to not being able to get into stretch-pants.” Send-up of boorish jackass from the mid-90s or allegedly “insightful” The Five routine from now? You decide!

Though debuting as the third-act punchline to a single episode about Al etc’s “war” against a TV personality (Jerry Springer, who had not yet come into his own as a real life talk show titan) and self-described “Masculine Feminist,” NO MA’AM proved popular enough to become one of the more frequent running gags of Married’s final four seasons. In The Legend of Ironhead Haynes, the organization seeks out an Iron John-esque figure of legend (Waylon Jennings) and receive a new masculinity-specific Ten Commandments… which they promptly burn for heat rather than part with an assortment of lingerie catalogues.

Ultimately, NO MA’AM would assemble for about 14 episodes before the series came to an end in the eleventh season. Sometimes just as a one-off reference or B-story (in Bingo Was Her Game-O the group’s “intense debate” over choosing a new official beer keeps Al away from learning of Peg’s substantial winnings in a bingo tournament), other times expanding on its own self-constructed mythos (in Flight of The Bumblebee they haze Al’s son Bud as a potential new member through an elaborate prank that leads to him having to wrestle King Kong Bundy). In one of the more memorable appearances, they even attempt to rebrand themselves as a religion (season 10’s Reverend Al) – not for ideological reasons, but to avoid paying a beer tax.

It also served as a plot-element of two of the series’ rare two-part episodes: In Business Sucks and Business Still Sucks, Al summons NO MA’AM as a counterweight to a public-breastfeeding protest being waged in his mall shoe store (their solution: A counter-protest of flashing their beer-bellies). In the especially prescient I Want My Psycho Dad I & II, NO MA’AM mobilizes when Al’s favorite TV show – itself a send-up of ultraviolent macho power-fantasy series (unseen but frequently heard) – gets run off the air. They take their fight all the way to Congress… though they’re a bit stymied when the actor who portrayed Psycho Dad holds a press conference to announce that a deranged fan letter from Al has led him to retire (and apologize for) the character. Oops.

Married With Children has today largely passed into pop-culture memory. Television history now remembers The Simpsons (which debuted two years later) as being the show that “launched” the Fox Network; but in truth the first time most Americans found out Fox existed (the network was a notoriously bargain-basement affair in the beginning) without accidentally breezing by it while channel-surfing was when a “family values activist” launched a protest over the third episode of the (then largely-unknown) Bundy family’s adventures. Some of that is due to quality (like most pre-DVD/streaming sitcoms, the ration of “filler” episodes is pretty high) but also owes something to being dated – we were meant to laugh at Al’s pathetic ignorance, but a lot of the show’s very of-the-90s “humor” will doubtless come off pretty ugly to modern ears.

But, it must be noted: Through NO MA’AM, Married With Children had the more excessive 21st Century MRA fringes predicted with eerie accuracy (one can imagine Al having an active Reddit life, at least). Not exactly my first choice of fictional television entities to spring to life, but as Married spin-offs go I guess it’s still preferable to Top of The Heap…