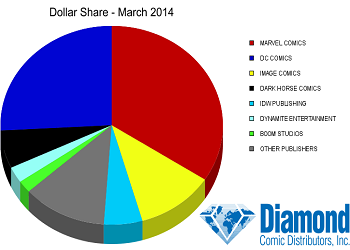 While DC Comics captured prominent positions in the sales charts, Marvel came out on top with roughly 10 percent more of the month’s dollar and unit shares.

Diamond Comics Distributors has released its list (compiled from the sales data of 3,500 plus comic shops) of its top products for March 2014 and the month apparently came up Marvel. The comic publisher led all of its competition with a 34.31 percent dollar share and a 38.17 percent unit share. The company’s success included five books on the distributor’s list of top 10 selling comics as well.

Following up close in a respectable (and not unexpected) second was DC Comics which claimed 25.94 percent dollar share and 29.02 percent unit share. DC had particular success with Scott Snyder’s ongoing Batman book which continued its Year Zero arc which, similar to Frank Miller’s Year One story, follows Batman during the opening days of his career. DC, in fact, actually managed to capture the first four slots on of the top 10 comics list with Superman Unchained, Forever Evil and Sandman Overture following behind Snyder’s Batman.

The remainder of the month’s sales were split among smaller publishers with only Image, Dark Horse and IDW breaking 5 percent. Image in particular had a strong month, especially in the trade paperback category where the latest volume of Robert Kirkman’s The Walking Dead flew off of retail shelves and captured the number one sales spot.

All in all, the month’s results aren’t much of a surprise. Some might be a bit perplexed as to why DC took second place considering the fact that it enjoyed some considerable success on the comics bestseller’s list (not to mention the trade and toys categories). That said, Marvel’s own selection for the month included several new and anticipated releases from its ongoing Now initiative which, in addition to its many other popular titles, likely helped push it to the top.

NASA to Experiment on Twins by Sending One Into Space