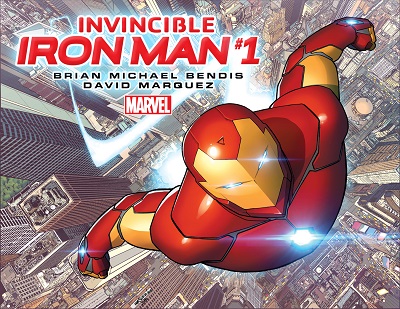 Earlier this summer, Marvel offered the world a first glance at its plans for its post-Secret Wars “All-New, All-Different” universe. The publisher unveiled 45 new books -a mixture of re-launches and new series- that would serve as the spearhead of its refreshed continuity. Not surprisingly given the character’s popularity, one of the first books listed was Invincible Iron Man, a new series by writer Brian Michael Bendis that would continue the adventures of Tony Stark.

Hoping to give its readers a deeper look at the new book, Marvel today has put out a series of preview images showcasing pages and variant covers from the first issue. The preview pages themselves look as though they’re from the opening section of the book and feature everyone’s favorite tech genius billionaire working on what he hopes will be the Iron Man suit to end all Iron Man suits. “I finally found a way to include all my different armor modes into one,” he says, after finishing it. The pages do more than just show off his new toy however. Marvel also stated that the new comic will further explore what “really happened” at the end of Secret Wars as well as the consequences of recent revelations about Tony’s parentage.

In addition to stating that “questions will be answered,” Marvel has also promised that first issue of Invincible Iron Man will include “a shocker of a last page that will have the entire comic industry talking!” Whether or not that winds up actually being the case is something we’ll have to wait and see. Happily though, we won’t be waiting for much longer since Invincible Iron Man 1 will be landing in comic shops on October 7th.