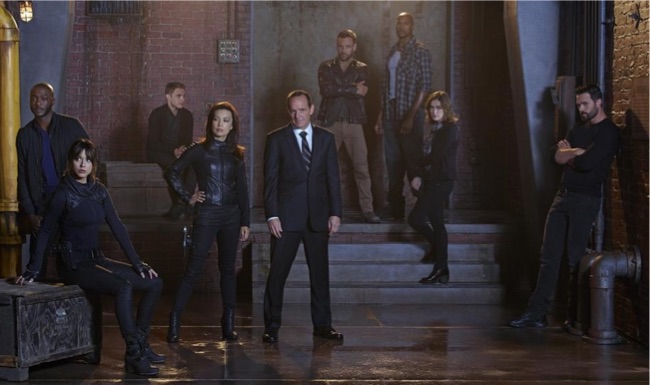 Agents of S.H.I.E.L.D. did not air a new episode this week, having been pre-empted for a special about Marvel’s 75th Anniversary. So instead of a recap, please enjoy this overview of how season 2 has managed to improve over its predecessor thus far. A SPOILER WARNING is in effect.

At this point, even the film geek community’s hardest to please critics think Marvel’s Agents of S.H.I.E.L.D has turned a major corner in its second season. Heck, I was among the more forgiving of season 1, and even I could tell that the show had spent its time off working out an entirely new ground-game. It’s sharper, funnier, more exciting, has a better sense of self, and is just a flat-out better show.

How did we get here? Well, mostly it’s just the same kind of gradual evolution that most TV shows go through. In truth, the majority of series (even great ones) look a lot different starting out than they do once they’ve figured out what works and what doesn’t, but because of its Marvel Cinematic Universe (and Whedonverse) pedigrees, Agents came pre-loaded with expectations that it would play closer to the made-for-binge-watching mini-movie set than the cheeky “NCIS: Marvel” setup that landed on screen.

Everyone Is More Interesting
Yes, it was a bit refreshing that in the first season the heroes were a Scooby Gang of happy-go-lucky misfits, but that kind of “aw shucks” dynamic can only extend so far before you start undermining tension. Season 2 has taken the events of both the first year’s finale and Captain America: The Winter Soldier as an occasion to make everyone a little bit more interesting by “breaking” them all, just a little bit (or a lot, in some cases).

Examples: Fitz/Simmons as platonic BFF’s finishing each other’s sentences? Cute. Fitz/Simmons as friends who used to finish each other’s sentences but now don’t because one’s romantic crush on the other came out in a dark moment? Interesting. Coulson as a ragtag team-leader put off his game by questions of how he survived death? Actually, that got tiresome toward the end. But Coulson as the Director of a (now “underground”) relaunch of S.H.I.E.L.D. itself plagued by suspicions that he might be dying, turning into a monster, or both? Much more interesting. 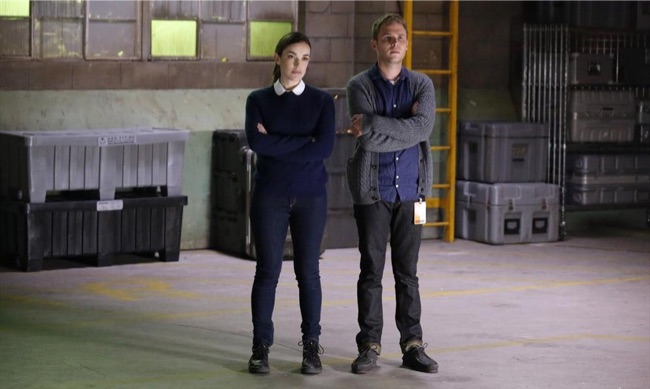 Avengers Who?
Obviously, the primary hook of his series is always going to be that its characters are operating on the street-level (and in the shadows) of the bigger, superhero-driven stories of the Cinematic Universe. Hell, depending on how the timing works out, it’s practically a given that however season 2 wraps up it’ll be directly affected by either the build-up to or aftermath of Avengers: Age of Ultron.

But whereas season 1 was almost entirely reactive to the comings and goings of the movies (everything eventually ties back to Avengers and the Battle of New York, unless it was the week to bring up the Thor or Captain America sequels); season 2 now has its own internal engine to drive the storytelling. S.H.I.E.L.D. has ceased to (officially) exist, but most of its secrets and dangerous technology is in the hands of a very much still-kicking HYDRA, whose leadership is after a powerful McGuffin of unknown origin.

Sure, all it’s spinning out of Winter Soldier, will probably be related to the presence of Baron Von Strucker and his “miracles” in Age of Ultron (and might even involve alien races encountered in Guardians of the Galaxy), but that’s all garnish this time around instead of being the plate.

Better Use of Resources
Sure, I (like a lot of fans, one imagines) was hoping that Marvel’s first MCU-connected TV offering would show the kind of fan-fidelity that the films do (or, at least, be as enthusiastic about characters’ more colorful origins as something like Once Upon a Time is.) So yes, it was a bit disappointing to see a distinct lack of costumed heroes or villains meeting up with Coulson and Company during season 1.

Season 2 still isn’t exactly breaking the mold in that direction (if a familiar Marvel character turns up, chances are they’ll do so looking like civilians with powers than anything more comic-inspired) but it’s doing a lot better. The Absorbing Man’s appearance easily rates as one of the best supervillain turns in the Cinematic Universe thus far: He looked great, the powers were used interestingly, he was instantly recognizable as “himself” to fans and, hell, they even contrived a way for him to use his ball-and-chain weapon! Sure, I’d still eventually like to see Blizzard slip into his blue-and-white tights just for the surreality of it, but for now it was fun to see someone running around zapping random victims into ice and whipping up and iceberg to keep a boat from leaving in what usually starts out looking like a “normal” spy show.

A Reason to Care
This, to be fair, is another function of the show simply having had a prior season to work out the kinks, but it’s true all the same. These characters are no longer cyphers (for the most part, though Ward is still more of a handsome plot device than a person) but individuals with histories and personalities we can get into and care about. More importantly: They’re being written that way.

The biggest overall improvement by far is that the writers have learned (and then some) how to tie the various mysteries that drive the plot directly into the personal relationships of the characters — easier said than done in a genre show with an ensemble cast. The alien writing is a plot point to keep an eye on, sure, but the effect its appearance has on Skye, Coulson and May’s view of one another is more important than whether or not it turns out to be a map to the Lost City of Attilan (or wherever).

At this point, Agents is running like a well-oiled machine. The question is whether it can keep up the momentum all the way through — and whether Marvel fans who checked-out midway through season 1 and/or casual fans who might feel lost in the newer, denser series will get onboard in a meaningful way.

The Legend of Zelda: Majora’s Mask Is Finally Being Remade for 3DS