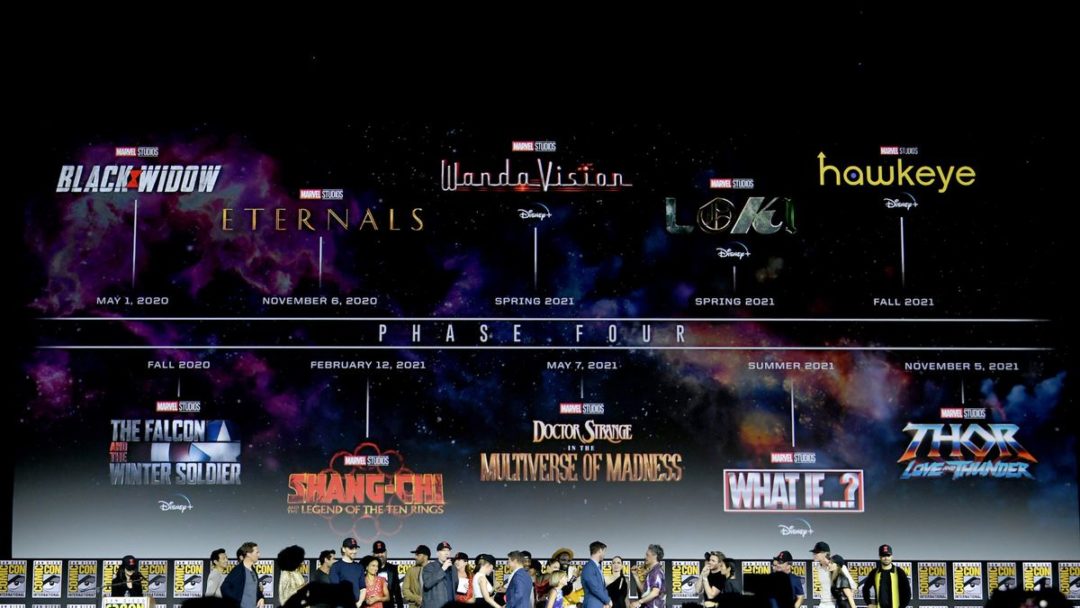 Marvel’s San Diego Comic-Con 2019 panel has officially wrapped up, so let’s talk about everything going down in the Marvel Cinematic Universe Phase 4 right now.

We gave you the details on this one yesterday, but in summary, Eternals will have an all-star cast including Angelina Jolie (Maleficent, Wanted), Kumail Nanjiani (Silicon Valley), and Richard Madden (Game of Thrones) when it opens Nov. 6, 2020. Chloé Zhao will serve as the film’s director. Her previous works include The Rider and Songs My Brother Taught Me.

Shang-Chi and the Legend of the Ten Rings

We finally know that Shang-Chi will be played by Simu Liu (Kim’s Convenience, Taken 2017), who mentioned his interest in the role on Twitter late last year. Awkwafina (Crazy Rich Asians) is also starring in an unspecified role.

OK @Marvel, are we gonna talk or what #ShangChi

Shang-Chi and the Legend of the Ten Rings is short on plot details, but to the relief of many, it will feature the MCU’s second go at the (real) Mandarin. Fans were vocal about their disappointment with the character’s twist portrayal in Iron Man 3, so this time around, Marvel has brought on Tony Leung (The Grandmaster) to give the character a breath of fresh air.

Doctor Strange in the Multiverse of Madness

The sequel to 2016’s Doctor Strange is quite the mouthful but teases the proper introduction of a multiverse in the MCU.

Marvel Comics’ menacing foe Nightmare is set to star as the sequel’s villain, which bodes well for director Scott Derrickson’s comment that Doctor Strange in the Multiverse of Madness will be “the first scary MCU film.” The movie will still stick with a PG-13 rating though. Elizabeth Olsen will co-star as Scarlet Witch, and Marvel’s WandaVision will connect with this movie in some way.

Doctor Strange in the Multiverse of Madness releases May 7, 2021.

Thor 4 got its official title reveal in the form of Thor: Love and Thunder.

The film will see the return of Thor: Ragnarok director Taika Waititi and Natalie Portman as a female version of Thor. Portman took the stage last night wielding Mjolnir, signaling her worthiness to take this next step for the MCU.

Black Widow, the movie that is next up in Marvel’s grand scheme, got a cast lineup, release date, and the lucky attendees of Hall H also got to see some footage from the movie. Gizmodo says the footage included “lots of very grounded action stuff.” The movie will be a prequel detailing mysterious events in Budapest that were referenced in previous movies.

Tricky Marvel villain the Taskmaster will serve as the film’s antagonist when Black Widow releases May 1, 2020.

Marvel announced many new shows for Disney+, Disney’s upcoming streaming service. The Falcon and the Winter Soldier (starring Anthony Mackie and Sebastian Stan) is the only Disney+ show set for next year, with its fall 2020 premiere.

WandaVision (starring Elizabeth Olsen and Paul Bettany), Loki (starring Tom Hiddleston), What If…? (an animated series about hypothetical fun events in the Marvel universe), and Hawkeye (starring Jeremy Renner) all land in 2021. WandaVision and Loki will launch that spring, and What If…? And Hawkeye will follow that summer and fall respectively.

What If…? specifically has a lot going into it, as Marvel teased a large portion of the MCU cast returning to act in some of the animated show’s episodes.

Lastly, there was Blade, as we already covered. Speaking to The Hollywood Reporter after yesterday’s event, Feige explained that Ali’s casting was never Marvel’s plan to begin with – the choice to play Blade was Ali’s idea. Ali called Marvel shortly after winning an Oscar for his work on the film Green Book and specifically asked to be part of the hero’s inclusion in the MCU.

Though the project is not part of Marvel’s phase four, its reveal was something special and a few fans were able to record the mayhem.

the chills I got were unreal and I really had tears in my eyes. Marvel doesn’t disappoint #SDCC #MarvelSDCC pic.twitter.com/ysqG2BIwcW

At the end of last night’s bombastic event, Feige mentioned that Black Panther 2, Captain Marvel 2, Guardians of the Galaxy Vol. 3, Fantastic Four, and mutants in the MCU are all on the horizon. It sounds like plans for these titles are in the earliest stages, so do not expect any updates on those projects for a while.

Check back for updates on the future of the Marvel Cinematic Universe.