Developed by Bioware and published by EA. Released March 21, 2017. Available on PC(reviewed), PS4, and Xbox One. Review copy provided by publisher.

After the debacle that was Mass Effect 3‘s ending and Bioware’s unfortunate response to the uproar it created, the bar was set awfully high for Mass Effect: Andromeda. Not only would it need to bring new gamers to the series, but it would have to convince former fans who felt burned to come back. Unfortunately, Andromeda misses the mark despite its memorable moments. 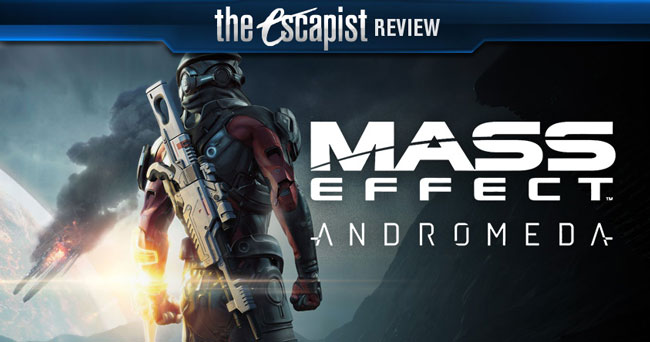 As Mass Effect: Andromeda opens, you’re arriving in the Andromeda galaxy aboard the Hyperion, the giant “Ark” ship that’s bringing 20,000 humans to their new home. Unfortunately, you’ve encountered a giant space anomaly (appropriately named “the Scourge”) that’s not only wrecking the nearby planets, but it’s raising hell with your ship. The story that’s set up is actually quite an intriguing one: Most of the races of the Milky Way got together to send colonists to the new galaxy, and you’re part of the “Pathfinder” team that’s tasked with finding places for them to settle.

But that story, as interesting as it could be, quickly devolves into something that’s going to sound all too familiar to fans of the series: An ancient civilization has left advanced technology laying all over the place, and you need to figure out how to make it work so you can use it to save all the colonists and the new galaxy. Yeah, we’ve been here before.

Filling in the role of main character is Ryder, and as you’d expect you can choose either a male or female version of the character. Character customization feels a bit limited compared to previous games in the series, but you can craft a number of different-looking versions of our protagonist. Before you know it, Ryder finds himself in the role of “Pathfinder,” the leader of the team that’s trying to find viable colony sites in Andromeda. You’ll have the chance to make Ryder your own through dialog choices, as you’d expect from a Mass Effect game. But Andromeda eschews the Paragon/Renegade system from earlier titles in favor of a number of possible responses that range from logical to professional to sometimes downright goofy.

The main story has you crisscrossing the galaxy to activate “Vaults,” which are leftover Remnant (that’s the ancient civilization mentioned earlier) structures that have the power to terraform the planets you’re on. These require you to decipher puzzles to activate them, but don’t expect anything too challenging. There are some basic number puzzles, as well as a sudoku-style glyph puzzle to complete for each one, but there’s nothing that would hold anyone up from advancing. 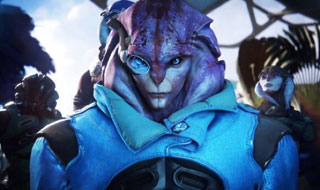 Your new ship, the Tempest, comes along with a new crew. It’s a mix of races, as you’d expect, but there are few surprises here. You’ll end up with a Krogan who likes fighting things and being abrasive, a Turian who can scrounge up about anything and call in plenty of favors, and a Salarian pilot who likes talking to himself on occasion, just to name a few. But unlike earlier games, everyone on the crew seems to gel quickly, and there’s very little tension here. You can speculate that everyone is pulling together in a strange galaxy, but the game goes out of its way to emphasize the personality conflicts on the Nexus station, and it seems odd that there’s so little disagreement amongst your crew.

I think this is because the game’s writing seems oddly out of sync, varying from quests that feel agonizing and meaningful to those that feel worth ignoring entirely. Worse, the moments that did feel important had little lasting impact. At one point, you’ll need to make the choice between saving a group of Krogan scouts or the Salarian Pathfinder. Choosing the Salarian Pathfinder angered Drack, my Krogan teammate, but within minutes of returning to the Tempest, he had forgotten all about that and asked me to help him with a mission.

There are also a ton of quests that feel like busywork, ranging from collecting missing supplies to gathering new ingredients for the bartender on the Nexus to use for new cocktails. There was a report that Bioware was taking inspiration for its questing from The Witcher 3, and you see that influence in the game’s loyalty missions. Rather than the “Visit planet, shoot things, complete mission” quests that were the hallmark of the original trilogy, Andromeda‘s loyalty missions span multiple planets, and some of them are quite good. You’ll help Peebee, your Asari biotic, track down Remnant tech that she uses to build robots, scanners, and the like. This involves multiple planet visits, several conversations, and a satisfying resolution. The loyalty quests are probably the high point of the game, in fact, even though at times they feel like they’ve been stretched out to make them seem more meaningful.

There’s plenty to keep you busy, and you can head back out into space to clean up any missions you missed once you’ve finished the campaign. My personal experience was 83 percent completion in about 65 hours, and I’m not sure that the remaining quests will get cleaned up anytime soon.

The Andromeda galaxy seems huge, and at first blush, it feels huge as well. There are multiple systems filled with planets, and each can be scanned, resources acquired, and in some cases, you can even land on them. But two things detract from the experience: First, there are only a limited number of planets to land on, and it’s a small percentage of total. Second, the planetary scanning is just as tedious and annoying as it was in previous games.

Even worse, the planets you do land on feel empty. The occasional outpost is surrounded by huge open areas of terrain, punctuated by sporadic enemy camps or structures. The Nomad, the six-wheeled revamp of Mass Effect‘s Mako, makes getting around more fun thanks to its jump jets, changeable drive modes, and the fact that you can run over enemies with it, but that doesn’t alleviate the main issue: these worlds are devoid of things to do. The planets themselves are often hazardous, with extreme cold, heat, or radiation meaning that you need to keep a sharp eye on your life support capabilities, especially outside the Nomad. 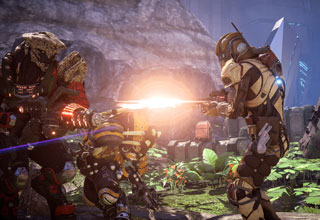 When you do leave the Nomad, it’s usually to shoot some things. Andromeda‘s combat feels pretty much like Mass Effect combat always does, with one big difference: Ryder still feels like he’s slow and cumbersome, but this time around, you’ve got a jetpack. It’s amazing how much the ability to jet into the air, or jet-dash in any direction, really changes up the feel of Ryder’s movement. It’s almost essential to master this, as many situation require you to move out of harm’s way faster than Ryder can move himself. It also makes flanking, repositioning, and other tactical movement much more feasible. The cover system feels a bit dodgy, though. All you need to do to enter cover is approach a large object with a weapon out, and you’ll take cover behind it. However, sometimes you’ll think you’re in cover, only to get shot. Of course, you can use this shortcoming on your enemies, and weapons have penetration capabilities as well.

As you’d expect, you can build out your version of Ryder however you like. Want to be a badass soldier who has mastered every sort of weapon and grenade? You can. Want to be a biotic warrior with powerful abilities to hurt and hinder your foes? You can do that too. You can even be a tech-based fighter with gadgets and other abilities.

I played the PC version of Andromeda, and it’s got its share of technical issues. There were occasional frame rate drops, even running it on my GTX 1070. Worse, there were certain times when the game would appear to lock up briefly, then snap back to life as if nothing had happened. That only happened three or four times in the 65 hours I spent with the game, but every time I thought the game had crashed. Those moments were annoying, but not as much as when the game actually did crash. Four times, the game crashed to a black screen. When I killed the process and restarted, the most recent save file refused to load. Luckily, Andromeda auto-saves fairly regularly, so it was just a matter of replaying a few minutes of content, but it was still annoying.

You’ve probably seen the gifs making the rounds of the internet detailing the facial animation issues in Andromeda, and I will say that while those depictions are accurate, I didn’t notice how bad they were while playing as much as I did out of context. It’s more noticeable at some times than at others, but it’s also something you can’t unsee. There are also clipping issues at times, and you can find yourself stuck on a quest if you miss a quest point, necessitating a reload. These are rare issues, but they definitely exist.

Andromeda‘s multiplayer is kind of an afterthought, as it should be in a Mass Effect game. You can team up with three other players to take on waves of enemies as you try to secure objectives. Despite the fact that you aren’t here for the multiplayer, it’s actually enjoyable when played with a good group, and you’re incentivized to keep playing by the random card packs you can earn, unlocking better gear. The only hangup is the need to buy health packs and self-revives with an in-game currency that seems a bit scarce from where I sit. Add in the prompts to buy more with your credit card, and it gets annoying fairly quickly.

Long-time Mass Effect fans will probably like most of what Andromeda has to offer, provided they’re willing to give it a try. It doesn’t stray too far from the formula established by the first three games, and there is plenty here that feels familiar. It falls short in a lot of areas, but even as I was noting all the issues, I was still able to have fun for a good portion of my playthrough. The performance issues, bugs, and poor animations detract from the enjoyment, so what emerges is a game where you can see the potential, and lament that it was never realized.

Bottom Line: Mass Effect: Andromeda is a game that takes few risks and pushes few boundaries. It’s a Mass Effect game designed to make fans of the series feel at home, but technical issues and lackluster writing leave it feeling like a missed opportunity to regain the prestige the franchise once enjoyed.

Recommendation: If you loved the first three Mass Effect games, you’ll probably like Mass Effect: Andromeda. It won’t bowl you over, but it will definitely offer up more of what you liked before, plus jetpacks. If you didn’t like Mass Effect before, you can probably give this one a pass.

Pay What You Want for Eight WordPress Courses