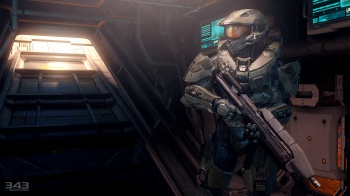 Halo 4‘s protagonist won’t show his face, but he may die.

Nothing spoils a good mystery like finally unraveling it. If you want some instant gravitas for a character, all you have to do is add a mask. Conversely, if you want to bring him or her right back down to Earth, remove it. Primers on how to create instant drama aside, 343 Industries wants to keep the tension high and plant Master Chief’s helmet firmly on his head in the upcoming Halo 4. That said, it’s not averse to killing him off at some point.

“It’s funny we don’t then show his face,” says Frank O’Connor, the franchise development director for Halo. “But that’s a device to keep the player invested in the character and keep the player from constantly being reminded that they’re not a hero [in real life].” O’Connor explains that while Master Chief’s appearance is actually well-known to fans of the Halo novels, he doesn’t feel that his face should make the jump to videogames. In movies and books, O’Connor argues, the consumer does not have to feel like he or she is actually experiencing the protagonist’s adventure, but keeping a videogame’s main character somewhat muted can help draw gamers further into the action.

The only problem is that Master Chief may die without ever showing his face, as O’Connor remains vague on Master Chief’s continued survival in the next title. “That’s a conversation I can’t get into. I’ll say that in Halo 4, things happen … [Interesting] stories have things that happen in them that are not comfortable and that are meaningful and that are permanent.” This could just be O’Connor’s way of remaining coy about the game’s plot details, but with a number of games, books, and movies that don’t involve him, the Halo franchise can probably survive without its most recognizable character.

If you’re still curious about Master Chief’s appearance, author Eric Nylund details it in the tie-in novel The Fall of Reach. Of course, you may find the character less compelling once the allure of the unknown is gone, but some mysteries must be solved.