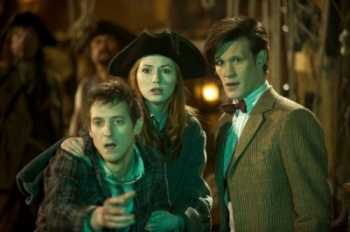 A Doctor Who fan with an impeccable name proposes in front of the TARDIS and gets a special message from the Doctor himself.

Sometimes, having the same name as someone important just doesn’t work out (remember what happened to Jeffrey Lebowski?). For Doctor Who fan Matt Smith (no, not that Matt Smith), though, sharing a name with the 11th Doctor has a whole TARDIS full of benefits. Thanks to his name and his now-fiancée’s love of the never-ending British sci-fi saga, Smith was able to leverage a whole Doctor Who exhibit to propose to his girlfriend, and even received a personal congratulations from the Doctor himself.

Smith, a 22-year-old Essex native, devised a cunning plan worthy of the good Doctor to win the heart of Stacie-Anne Dilkes. The two had been dating for a while, and Smith wanted to surprise Dilkes with two things she loved: Doctor Who and being with Smith himself. When Dilkes visited the Doctor Who Experience exhibit in London, Smith (with BBC Worldwide’s blessing) dressed up in a tweed jacket and a bowtie (because, you know, bowties are cool), pretended to be part of the exhibit. When Dilkes passed by the time-traveling TARDIS, Smith got down on one knee and proposed marriage – and Dilkes said yes.

To complete the happy occasion, the couple received a personal message from that other Matt Smith, who currently holds the role of the Doctor. “[There] are so many Smiths!!” he exclaims. “But I bet none of them have (sic) proposed at the Doctor Who Experience!” Actor Smith goes on to express his belief that Rory Williams and Amy Pond, the married couple of the current Doctor Who series, would approve of their union, then speculates on what the future may hold. “Next – babies in the TARDIS…?”

A certain leading lady once asked, “What’s in a name?” For not-Doctor Smith, it may not be a life of time travel and adventure, but at least he’ll always have his favorite companion by his side.

Thou Shalt Not Kill Radroaches