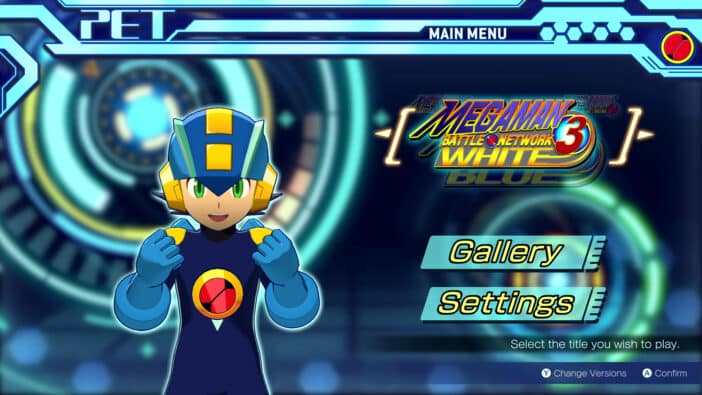 Capcom revealed many little updates for its games at the Capcom Online Program for Tokyo Game Show 2022, and one of the briefest yet most exciting updates was for Mega Man Battle Network Legacy Collection. Game director Masakazu Eguchi (aka Mr. Famous) showed up to confirm that online features will be included for every game in Mega Man Battle Network Legacy Collection, including online battles and chip trading. Additionally, a voiced 3D rendition of MegaMan.EXE will greet players on the game selection screen, and “it will behave similar to the PET Screen from the series with various reactions based upon your play and control style.”

In full, Mega Man Battle Network Legacy Collection contains 10 games: 1, 2, 3 Blue and 3 White, 4 Blue Moon and 4 Red Sun, 5 Team Colonel and 5 Team Protoman, and 6 Cybeast Gregar and 6 Cybeast Falzar. All of these particular games originally released on Game Boy Advance, where multiplayer functionality occurred via link cable. Online play is thus an excellent modern addition for these games. Plus, today’s video confirms that you can turn the collection’s “High Image Quality Filter” on and off, meaning you can choose whether or not you want to see the original pixel art or smoothed-out images.

These announcements are cued up at 23:27 in the video below, but Capcom also has a separate announcement page.

Mega Man Battle Network Legacy Collection is coming to Nintendo Switch, PlayStation 4, and PC via Steam sometime in 2023 — now with online battles and chip trading. As previously reported, it will be released in two volumes, but it will be possible to buy them together on Switch and PS4.

And as first noted by Rockman Corner, the game will not support cross-play or cross-saves.