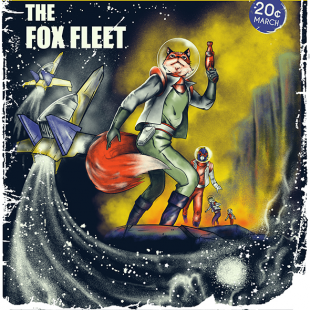 I’m going to go ahead and confess that I have something of a weakness for classic, pulpy science fiction. Even considering all of the baggage that comes with that sect of sci-fi, there’s just something about it that I find endearingly goofy even when it’s not necessarily good. Some of this, I know, comes from the cover art that often adorned these books. Often filled to the brim with bright colors and over-the-top cliches, there’s just something about them that strikes a good chord with me.

You can understand, in turn, why I was delighted to discover Josh Ketchen’s recently released art series Arcade Adventures. Transforming beloved video games into pulpy sci-fi covers, Ketchen’s illustrations include drawings based on Metroid, Bioshock, Portal, Mega Man, Star Fox, Earthbound, Resident Evil and Pikmin. Ketchen himself has been working as an illustrator for more than eight years “and drawing since he was able to hold a pencil.” In addition to this current series, he has, in the past, produced other mash-up works including a series of Star Wars-themed Super Mario posters.

As nifty as some of his other work is though, I have to say that I’m still most impressed with these retro covers. Setting aside the fact that he pretty much nails the look of the old books he’s spoofing, he clearly also put a lot of work into detailing them in such a way that they actually look like the sort of worn and weathered tome you might finding hiding in 99 cent paperback section of a second hand book store. If you take a look a Ketchne’s work and find that you like it, poster-sized prints are currently being sold for about $20-$25 depending on the image.