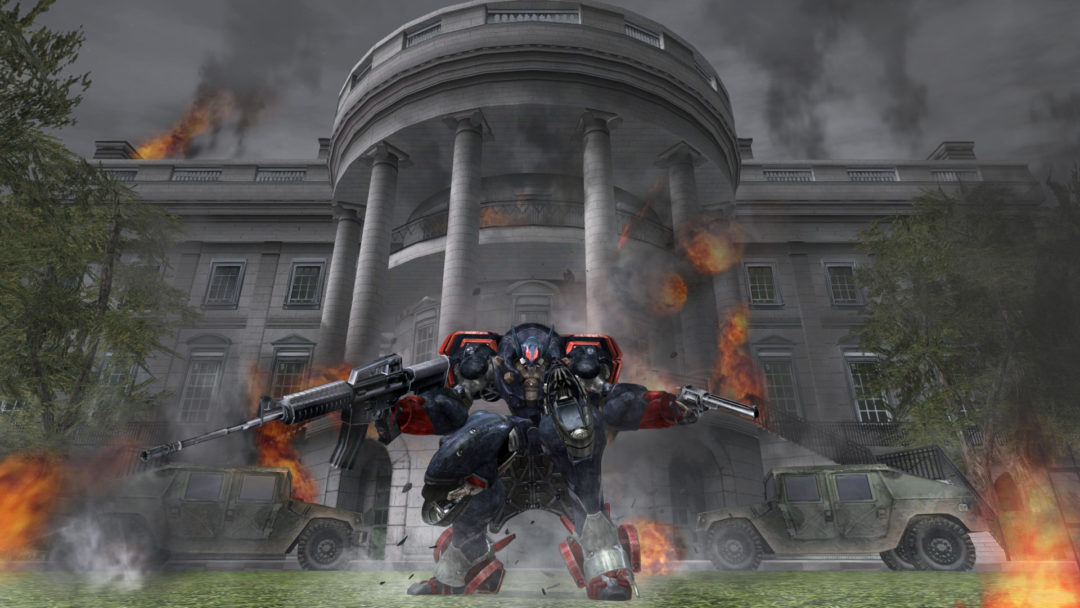 “Did anybody ever see Washington naked? It is inconceivable. He had no nakedness, but, I imagine, was born with clothes on and his hair powdered, and made a stately bow on his first appearance in the world.” – Nathaniel Hawthorne

America’s very first president has often been portrayed as superhuman. When General George Washington appears in the musical Hamilton for his absolute barnburner of an intro number, “Right Hand Man,” the characters announce him with infectious glee as if he’s one of the production’s biggest selling points. More than 150 years after Hawthorne insisted the guy was too badass ever to have been naked, comic book artist Brad Neely assured us the first president was “six-foot-eight” and “weighed a fucking ton.”

Washington started many presidential traditions including the idea of a fighting president who shows up with guns loaded and dukes up. Abraham Lincoln has hunted vampires, defended Earth from aliens, and fought alongside Image Comics’ headliner, Invincible. Fellow Illinoisan Barack Obama was cast as Superman in one of Grant Morrison’s comics before a retcon clarified it was merely a good likeness (though the 44th president sure doesn’t seem to mind the association). Not long after his assassination, the late John F. Kennedy had a cameo in a Superman comic, helping the hero maintain his secret identity by impersonating Clark Kent.

If you feel dopey, patriotic joy at these portrayals, then you should find an opportunity to play From Software’s 2004 game Metal Wolf Chaos, newly remastered as Metal Wolf Chaos XD by Devolver Digital. As an action game, it’s better than OK. As good-natured ribbing from Japan aimed at those of us who could not stand being alive during the presidency of George W. Bush, it is an inspired satire. It is what I believe must happen inside a Trump supporter’s head when they’ve mainlined a case of Natty Light and passed out on their boat on the Fourth of July. It is as gloriously, profoundly, endearingly stupid as the nation in which it’s set, and it understands the psychological underpinnings of the fightin’ prez better than any of the other portrayals I can think of, from somber Die Hard-on-a-plane Harrison Ford in Air Force One to the cartoonishly silly nunchaku-wielding Richard Nixon in Black Dynamite.

You play as Michael Wilson, 47th President of the United States, starting the game by bursting out of the Oval Office in a red-and-blue mech suit to fight a battalion of soldiers sent by the Vice President to assassinate you. Yes, the VP has his own mech suit. Wilson escapes via Air Force One, which launches from a hidden airstrip beneath the reflecting pool, damaging the Lincoln Memorial in the process.

Wilson’s chirpy secretary Jody provides narration and color commentary throughout the game, cheering you on as you drop rocket-powered knees into Abrams tanks and liberate Beverly Hills and Chicago by blowing up absolutely everything in sight. There isn’t a fiber of subtlety to be found in Metal Wolf Chaos. Determined to storm Alcatraz and destroy a giant doomsday cannon under the evil veep’s control, Wilson declares he’ll crush the enemy “like a Florida recount!” 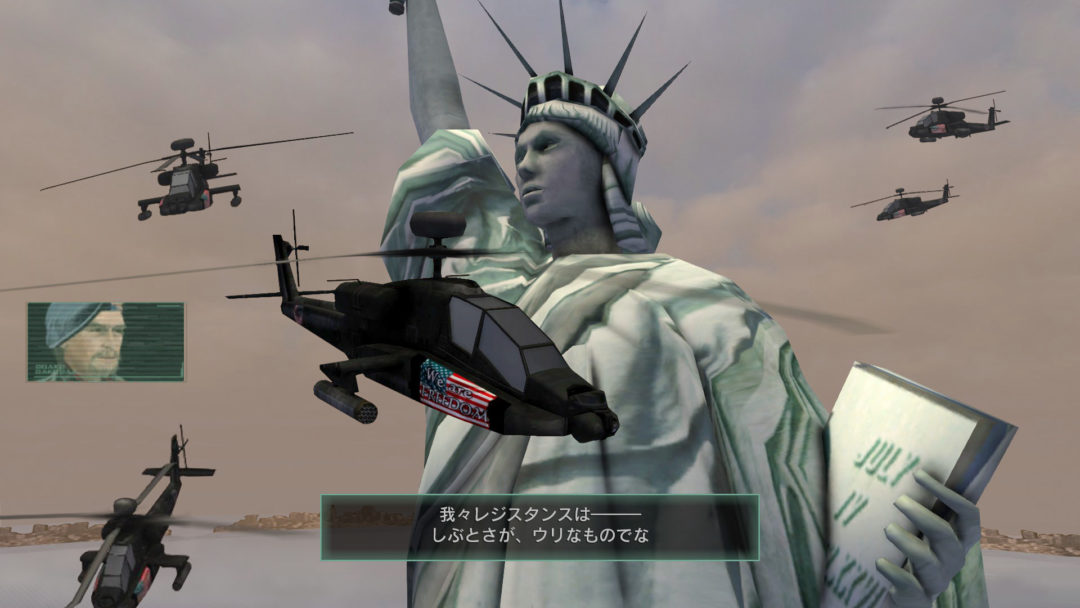 It’s hard to overstate just how hard the localization team worked to make the game’s English version exactly as silly as it should be. For those of us who were politically aware back in 2004, it’s equally hard to explain how perfectly the game nails the unbearable discourse of the time. The script is filled with purposefully bad grammar and cheesy lines abound, but I don’t know that any of it makes me groan harder than the discourse when the game came out, a time when actual adults were saying things like “shock and awe” or “fair and balanced” or “stay the course” with a straight face.

The genius of the whole thing is that the shots are coming from writers in a foreign country with intimate knowledge of America. When a U.S. studio greenlights a movie like Air Force One or Olympus Has Fallen, it’s drawing on actual patriotic sentiment. When Black Dynamite throws a kung fu fighting Dick Nixon at its star and then tags in a spectral Abe Lincoln to aid the hero, the absurdity of the 16th president taking down the 37th president feels cathartic. But something different is going on in Metal Wolf Chaos, a game in which Wilson rocket-boosts across the country and lays waste to other giant robots and buildings bristling with missile launchers in missions with codenames like “Bring Fashion Back to the Streets” and “Operation Arizona, Blood and Gunpowder Smoke.”

“But let me tell you a story of a man who stood against that tide. Who believed in his own justice even when it seemed the whole country had turned against him.” – Metal Wolf Chaos

Metal Wolf Chaos shows how that meat-headed patriotism must look to outsiders. Its hero is constantly steamrolling over things, babbling about freedom until the word has lost all meaning, complaining about an ungrateful press who is clearly misrepresenting him, invincible in the belief that the people must really be on his side, all while shouting dumb catch phrases. (They’re mapped to your D-Pad.) 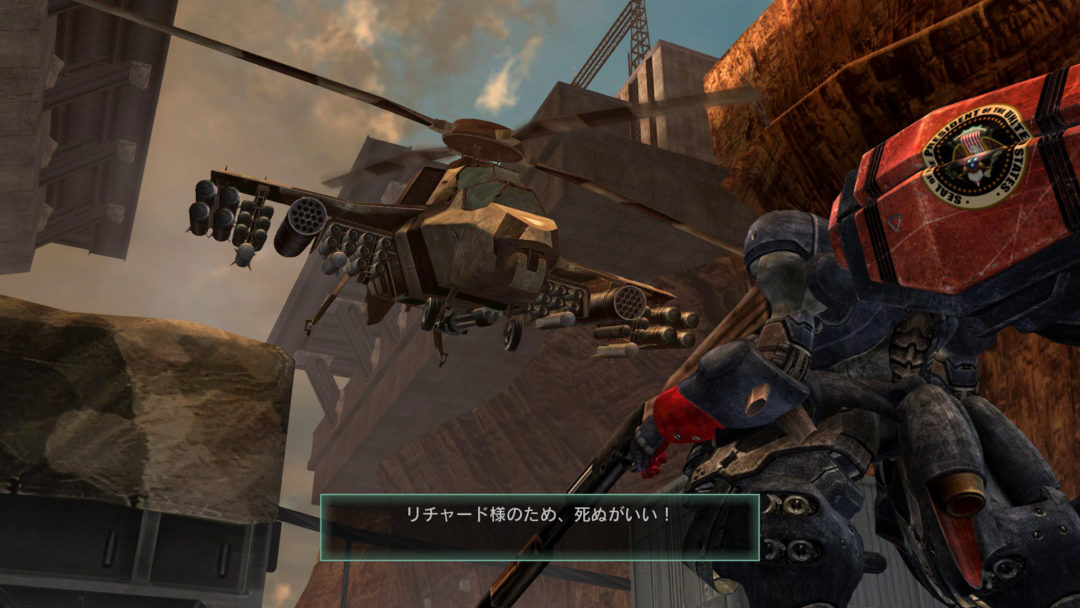 As the Middle Eastern conflicts we blundered into at the start of Bush’s presidency 18 years ago continue, those of us of draft age at the time recall the sheer indignity and disgust we felt at the time Metal Wolf Chaos was released. Older Americans’ ironclad belief in our righteousness and infallibility led them to march our country’s military straight off a cliff while everybody begged them not to. We lost friends. We sat up nights waiting for siblings to come home from deployment, their fates tied to conflicts predicated on falsehoods and pumped up with rhetoric about how we were liberators.

“Believe in your own justice!” goes the game’s refrain, which may as well describe the current presidency. We’re living under an utterly lawless regime that uses baseless racist fears to justify doing whatever it wants, and it then whines when the press call them on it. Let’s make a Space Force!!!

Metal Wolf Chaos XD is a great remaster of a game that must be seen to be believed but is also way too real right now. I am filled with both joy and despair when I say every red-blooded American should play it.