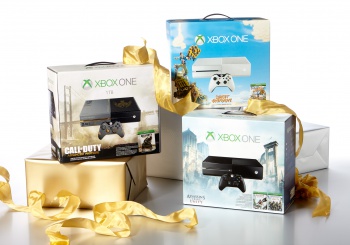 The Xbox One is getting a temporary price cut for holiday shopping ahead of Black Friday. All Xbox One consoles and bundles will cost $50 less from November 2 to January 3, 2015 at participating retailers.

The standalone console will cost $349 during this promotion. Bundles will also see the same price cut. Also beginning on November 2, Microsoft will release the Assassin’s Creed bundle, which includes both Assassin’s Creed Unity and Assassin’s Creed IV: Black Flag for $349 without Kinect and $449 with Kinect. Another $349 bundle includes a white Xbox One and Sunset Overdrive.

The other bundle, available November 3, includes the Xbox One, Call of Duty: Advanced Warfare, and a 1 TB hard drive for $449. This does not include the Kinect.

However, this promotion is only available in the U.S., a Microsoft spokesperson told Eurogamer, despite Microsoft’s original statement indicating availability and timing outside the U.S. will vary.

“Decisions about promotional and pricing strategies are made at a local level and based on market context,” the spokesperson said.

Microsoft launched the Xbox One November of last year for $499. In June the company began releasing a Kinect-free version of the Xbox One for $399. This price cut makes some Xbox One consoles and bundles cheaper than Sony’s competing console, the PS4. Sony has not announced any price cuts for the PS4.