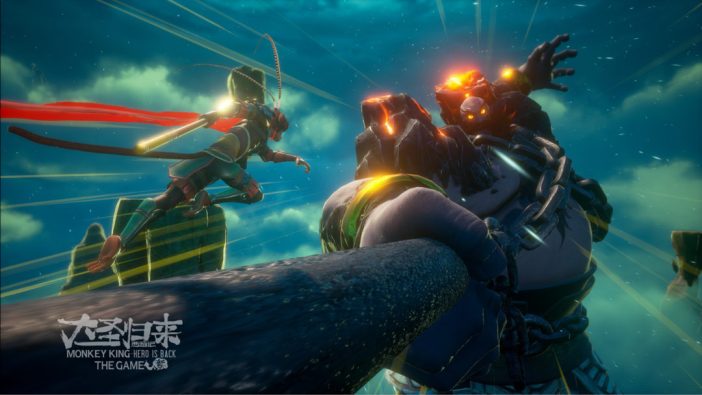 Sony unveiled a trailer for the game Monkey King: Hero Is Back at its ChinaJoy 2019 press conference.

Developed by Sony and HexaDrive, Monkey King is an adaptation of the same-named 2015 film that was the highest-grossing animated movie in Chinese history until it was supplanted by Kung Fu Panda 3. They like cartoon animals that perform martial arts in China, apparently.

Monkey King‘s new trailer leans heavily on combat. Specifically, Dragon Ball Z-style, high-spectacle, mid-air combat. Throughout the clip legendary simian hero Sun Wukong goes toe to toe with a number of elaborately costumed and unusually equipped opponents, including one who has flaming wheels attached to his feet. A battle against a bearded, axe-wielding enemy the size of Taipei 101 is a particular highlight.

Don’t let the trailer give you the wrong idea though. Monkey King isn’t a fighting game, and it’s not all self-serious flying furries bludgeoning people to death with golden baseball bats. Earlier footage revealed that the game will be a third-person action adventure title, with beat-em-up combat, rudimentary magic mechanics, and a playful sense of slapstick humor.

Monkey King: Hero Is Back doesn’t have a release date yet, but it’s coming to PlayStation 4. THQ Nordic is rumored to be handling distribution of the game outside China.