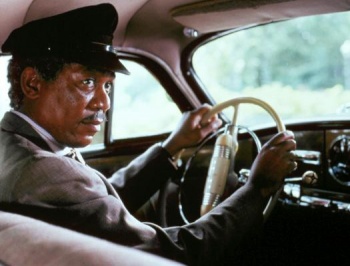 Morgan Freeman will be lending his voice to free GPS Navigation app, Waze, as part of the marketing push for his new film London Has Fallen.

Arguably Hollywood’s most recognizable voice is coming to a GPS near you. Morgan Freeman – aka God/President of the United States/Red Redding – is adding his universally appealing timbre to GPS app, Waze. Apparently, he caught the bug while Driving Miss Daisy and is now going to help each of us get around town, elderly Jewish ladies or not.

The move comes as part of the marketing push for London Has Fallen, the sequel to Olympus Has Fallen. In LhF, Freeman plays the vice president of the United States, and in the app he’ll be guiding you as if you were the president.

This is… a little underwhelming, actually. I was hoping to hear Red telling me to “get busy living, or get busy driving.” From what I can gather, you can’t get Morgan to call out the street names to you – just “left here,” or “keep going straight for one mile, President Wazer.” This is especially disappointing, as my home town has quite a few awkwardly-titled boulevards that translate rudely to English.

This may not be the Morgan Freeman GPS we wanted, but it could be the best we’ll ever get. So let’s count our blessings, shall we, and appreciate a gallery of his most iconic roles.

Since Waze won’t give us the tools to put words into his voice, we’ll have to use our imaginations. What are the lines you’ve been wishing to hear Mr. Freeman say?