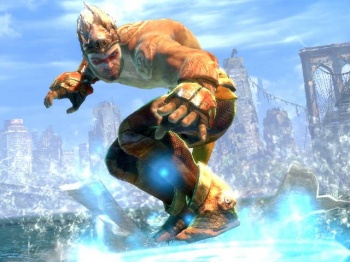 According to the game’s publisher, Enslaved got lost among all the other games that came out at the same time.

Enslaved: Odyssey to the West was something of a disappointment for Namco Bandai, at least in terms of sales. But according to Carson Choi, Namco Bandai’s VP of marketing, Enslaved’s less than amazing figures were the result of bad timing.

Choi said the Enslaved’s low sales were in no way a reflection of the game’s quality, and referred to the warm response it had received from critics as proof. He said that the problem was that Namco Bandai hadn’t picked a very good time to launch the game, which meant that it had come out in a very busy holiday season. He said that picking the right time to get games to market was vital, and the experience with Enslaved had proven that the publisher needed to get a lot better at it.

It might sound like Choi is making excuses, but if you look at the games that were released at around the same time as Enslaved, he does kind of have a point. Halo: Reach, Dead Rising 2, Medal of Honor and Fallout: New Vegas all came out within a few weeks of Enslaved. Not only that, but Call of Duty: Black Ops, Assassin’s Creed: Brotherhood, Gran Turismo 5 and Epic Mickey all came out the following month.

The release window won’t be the only reason why Enslaved didn’t sell, but at the same time, it can’t have helped. It also explains why Namco Bandai is looking at the game as the first in a series. If the publisher thinks that the low sales were because it slipped up, and not because people didn’t like the game, then it makes a lot more sense for it to be thinking in terms of sequels.

Do Not Past Go…