Why the streaming service should retire its “all at once” release system.

If we were to choose a mantra to describe Netflix as a concept and as an approach to business, I would nominate “All at once.”

“All at once” can be synonymous with “instantly,” like the streaming service itself. In the long, long ago of 2011, Netflix decided to separate its streaming and DVD-by-mail services “all at once,” much to the ire of its customers. And, since venturing into the realm of original content creation, the mantra of “all at once” has carried through: Its shows are written all at once, shot all at once and released, yes — “All at once.”

Netflix’s unconventional release approach has in large part been championed by its viewers, seen as a democratization of the viewing experience. Rather than be told when and how an episode can be seen by the tyrannical suits of a network or cable channel, a full season dump of episodes means viewers can watch when they please and at the rate they choose. “Binge-watching” is a symptom of many changes in the cultural landscape — DVRs, The Internet, unemployment* — but no single content provider has helped make it a cultural norm as much as Netflix.

But Netflix’s “all at once” release system isn’t as democratic as it’s queued up to be — and is actually antithetical to the ravenous culture of content consumption Netflix has helped create. The streaming service and its viewers would be better off if the experiment came to an end.

Cultural Capital
In you’re anything like me, you spend too much time on the internet. In doing so, you’ve probably noticed something I’ve noticed: the lead-up to and denouement from new episodes of Game of Thrones and The Walking Dead border on insane. A new episode is good for at least two days of social media saturation (the day of and the day after) — sometimes longer for a premiere or finale. Internet God help you if you’re out of town or have to work or are one of the three or four people without a friend’s HBO Go password: Spoilers are coming. (More on the “s” word in a minute.)

By my count, Game of Thrones engages us in this dance of anticipation and discussion ten times a season. The Walking Dead, now 16 times. Week after week of swirling fervor and relief as millions of viewers experience the show (more or less) together.

But what about Netflix’s biggest shows? House of Cards and Orange Is The New Black? There is no weekly tidal wave of anticipation, because there is only one release date per season. By releasing full seasons at once, Netflix is foregoing a huge amount of cultural capitol. By its own hand, they’re robbing themselves of nine or 15 or more spikes in social media airtime.

Perhaps a comparison to the two most popular shows on cable is unfair. It’s well known that Netflix keeps its “ratings” a secret, and it behooves them to do so. They’re the ones making their shows and spending the money, so only they need to know who’s watching (until the DGA, PGA and SAG sue for the information for the sake of fair contract negotiations, that is). One suspects that if a show wasn’t a success by whatever in-house metrics Netflix uses to determine such a thing, that show would be cancelled like a show on any other network. But what I’m talking about isn’t about ratings or raw numbers (for all their secrecy, I think we would have heard about it if HoC or OItNB outperformed GoT or TWD). I’m talking about the way television is consumed; which is to say, beyond the direct transmission from screens to eyeballs, and into the cultural ether itself.

Alright, so who cares about what Netflix is giving up? Who cares about their “cultural impact?” The reason we like the “binge-watch” approach in the first place is that it’s pro-viewer. It’s the democratization of television!

It certainly would appear that way. But the “full season” release method is bad for viewers, too. 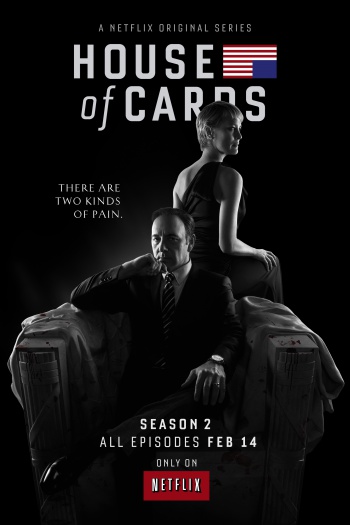 Spoiler Alert
As you can see, the House of Cards and Orange Is the New Black graphs come with one spike a piece: The day or weekend of release. From there the conversation peters out and slowly washes away into the white noise of internet chatter.

This isn’t because people aren’t watching the show or don’t find it conversation worthy — it’s because the method of release does not allow them to talk about it.

From the day a new season of a Netflix show appears, its viewers become increasingly fragmented. If my fiancé and I make it through three episodes the first weekend, and my colleagues make it through seven, 13, and zero, respectively, things are going to be awfully quiet around the water cooler. Dividing the audience further is not only antithetical to our “no spoilers” culture, but to the viewing experience itself, which is, and always has been, communal. Netflix has effectively limited the conversations about their shows to the one prior to its release, and the one whispered around the office or social media weeks later, as viewers who have crossed the finish line are relieved to find someone else has, too.

In an increasingly cluttered cultural landscape, dividing the viewing audience further isolates us from one another and decreases the number of common cultural touchstones.

Not that you should have to pander to those so spoiler-fearful that they can’t enjoy a show if they become aware of a single detail of its content, or to those who are so far behind the cultural curve they aren’t likely to ever catch up (listen, I’m going to watch The Wire some day, I promise). But the communal experience of TV viewing is something we should want. The “cultural capital” Netflix is denying themselves is being denied to us as well. Watching things “together” and talking about it afterward is how we connect to friends, family and co-workers. It’s how we examine ourselves and encounter new ideas. It gives us ownership over the characters and plot. If we’re cut off from our ability to talk about our cultural experiences, those experiences lose cultural and emotional value.

For Netflix, the “meta” television-watching experience isn’t the one being impacted. The effects of “all at once” releases are leaking into the content of their shows as well.

This is more subjective matter, but season 2 of House of Cards was troubling and often frustrating because it was a show that seemed to be written with the expectation that it be binge-watched. Dropping redundant or plot-telegraphing “Previously On” and “Next Time On” stingers are welcome innovations to modern TV — not being able to follow a plot because you take a couple weeks off between episodes is not. Is the assumption of binge-watching any more democratic than a network dictating when you’re allowed to watch its shows? 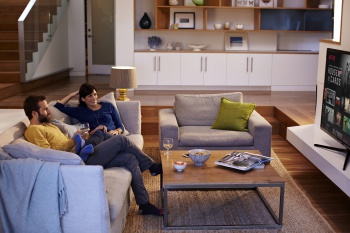 Find Release
All this is not to say that the old ways of television distribution are better by virtue of having come first. Streaming and binge watching are surely the way forward. Netflix and Amazon Instant Video allow us to catch up on series we otherwise might have missed (The West Wing, Veronica Mars) and to enjoy brilliant shows with diverse casts like Orange Is the New Black that might otherwise not exist. We should only hope that Netflix isn’t done experimenting.

If the strict dogma of release dates and times are one camp, and “all at once” releases are the other, what’s the compromise? Perhaps it won’t surprise to learn I would be happy to see Netflix adopt a weekly release schedule. It wouldn’t be a reversion to the old form. Rather, it would allow for the best of both ideas: Yes, there would be a single release date per episode, but then it would be available to watch forever after. No frantic search for a re-airing or a stockpiling of your favorite shows on your DVR, or the incessant request from the entertainment providers to buy and buy again and, as soon as they work out a new format, buy again. My friend Phil Hornshaw over at GameFront.com suggested releases in three episode bursts. Good for mini-binges and mini-rallying points of conversation and speculation.

Whatever they try next, I think it’s fair to say that the platonic ideal of television distribution has yet to be achieved.

Netflix recently announced a new “late night” talk show with Chelsea Handler, for which they’ve promised an “updated format.” For all the host juggling and channel swapping that keep it in the public conversation, late night television is a format in desperate need of new ideas – I only hope that “updated format” doesn’t simply mean releasing Handler’s first season all at once.