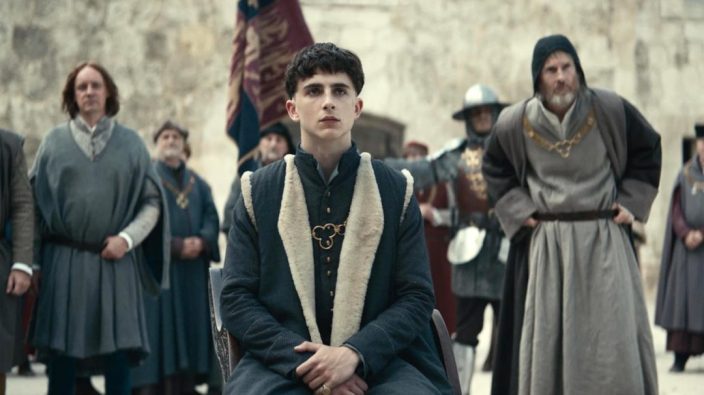 Netflix is ramping up its award season push as it releases the first trailer for The King starring Timothée Chalamet, which looks to continue the prestige film success that Roma brought the streamer last year.

The movie is Oscar bait to a T. A historical drama based on Shakespeare’s Henry IV, Parts 1 & 2 and Henry V, the movie has a cast that most movies would envy, including Timothée Chalamet, Joel Edgerton, Sean Harris, Lily-Rose Depp, Robert Pattinson, and Ben Mendelsohn. Chalamet plays King Henry V, who has reluctantly taken up the crown after his tyrannical father passes away and must now deal with all the crap his dad left behind. As the trailer shows, drama, politics, and war ensue.

The big draw here appears to be another stunning performance from Chalamet, who kicked out three critically acclaimed roles in Call Me by Your Name, Beautiful Boy, and Lady Bird in a little over a year and launched his name into stardom. This will be his first role since that ascension really, and it looks incredibly juicy, with the Shakespearean edge leading to a movie that is more character study than historical fiction or medieval war film. Aside from a general grayness permeating the trailer, it does look visually stunning and it’s clear Netflix has put money behind it.

The King will release in theaters on Oct. 11 so it can qualify for awards and then land on Netflix on Nov. 1.