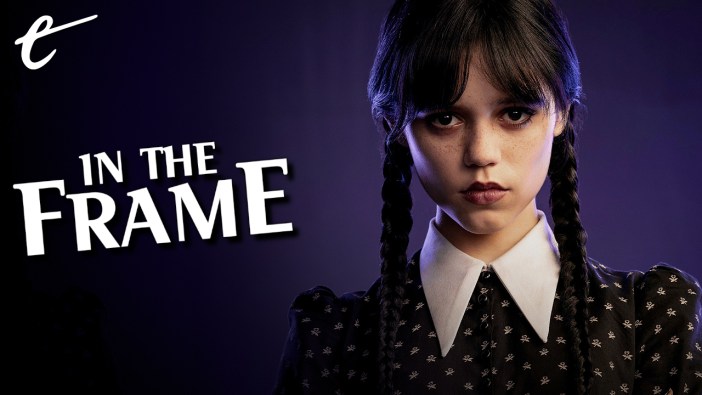 This article contains very slight spoilers for Wednesday on Netflix in its discussion of how the show adopts superhero narrative elements.

By all accounts, Wednesday has been a massive success for Netflix. The show’s first week ratings apparently broke the company’s record for single-week viewership of an English language series, surpassing the fourth season premiere of Stranger Things. For a company that has had a rough couple of months, Wednesday turned out to be anything but full of woe.

Wednesday is an interesting study in contemporary pop culture. It is an intersection of a variety of modern trends. Most obviously, it is a nostalgic reboot of a beloved property that holds a strong appeal for children of the 1990s. The Addams Family dates back to New Yorker cartoons from the 1930s and was developed into a live-action series in 1964 and an animated show in 1973. However, for modern audiences, the touchstone will be the two 1990s movies directed by Barry Sonnenfeld.

The show takes its most overt cues from Sonnenfeld’s The Addams Family and Addams Family Values. This is most obvious in the nostalgic casting of Christina Ricci as Marilyn Thornhill, a teacher at the Nevermore Academy that serves as the show’s primary setting. Ricci broke out playing Wednesday in those two films. The show’s characterization of Wednesday (Jenna Ortega) as a wry and detached observer likewise draws from those two films, along with the production design and score.

The show’s appeal to a generation of 1990s pop culture fans is also obvious in the decision to hire Tim Burton to direct the first half of the season. Burton’s work on projects like Beetlejuice, Batman, Batman Returns, and Edward Scissorhands secured his reputation as “baby’s first auteur” to an entire generation of young moviegoers. Sonnenfeld’s Addams Family movies were arguably comparable to Burton’s aesthetic, to the point that Burton was reportedly high up on the list to direct them. 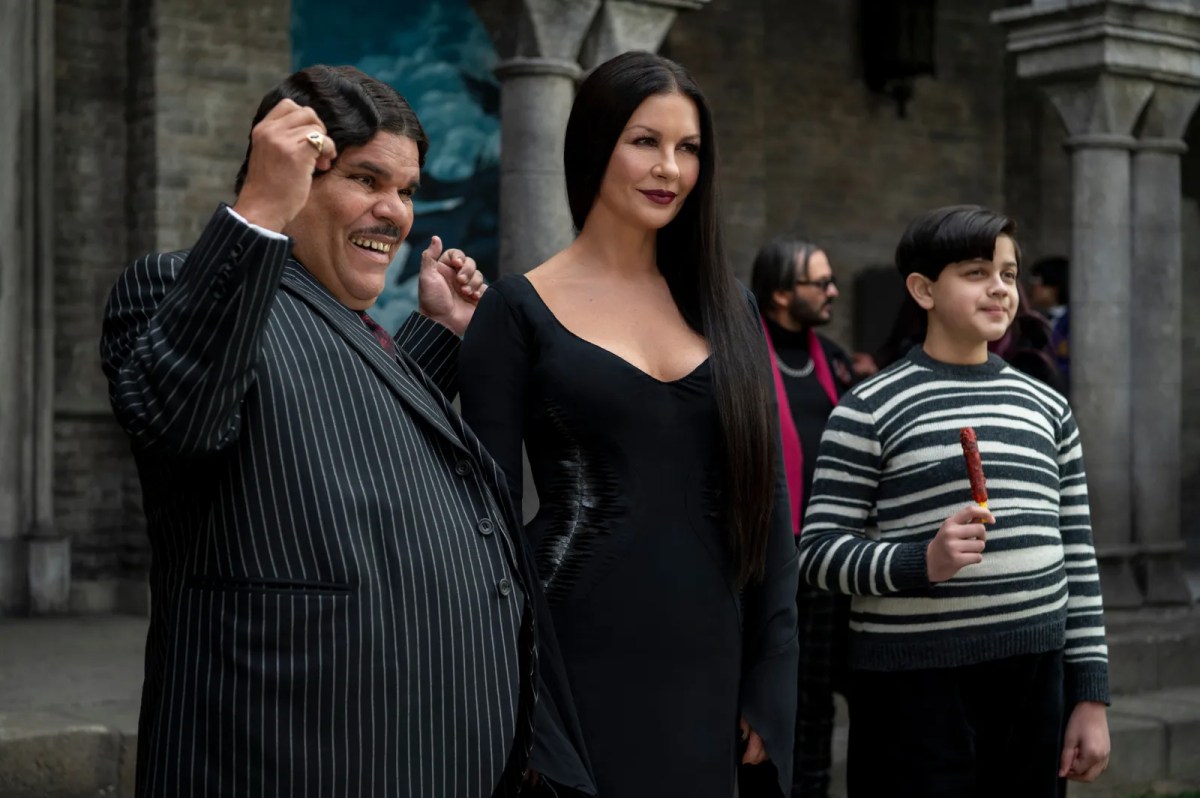 As such, Wednesday can be understood as part of a broader wave of 1990s nostalgia and perhaps a logical successor to and replacement for Stranger Things. It seems that Netflix will be leaning hard into this trend, given the recent trailer for That ’90s Show, which gets bonus nostalgia points for being a show set in the 1990s that is also a sequel to a show that was made in the 1990s. However, Wednesday is decidedly more complicated than a simple nostalgic embrace of an old property.

The most striking thing about Wednesday is that it is basically a superhero show. The series employs many of the tropes and conventions of the modern superhero genre, imposing a recognizable genre framework on the character and the world around her. This is clear in ways both large and small, and most obviously in how the series distinguishes itself from previous iterations of the classic Addams Family concept.

In terms of conventions, Wednesday gives its title character a literal superpower. As Wednesday is sent to Nevermore Academy, she begins to manifest a “gift.” Wednesday has psychic powers that are triggered through physical contact, allowing her to see the past and the future. These are an invention of the show and have no real precedent or basis in the franchise’s long and varied history. Inevitably, Wednesday uses her powers to uncover dark secrets and right wrongs.

Wednesday casts its lead character as a crusader. Her establishing character moment in the premiere comes when she unleashes her righteous fury (and a few hungry piranhas) on the bullies who were tormenting her brother Pugsley (Isaac Ordonez). Beneath her sardonic exterior, Wednesday Addams has a well-developed sense of right and wrong and a willingness to use her intelligence against those who prey on weaker people. It’s overtly heroic. 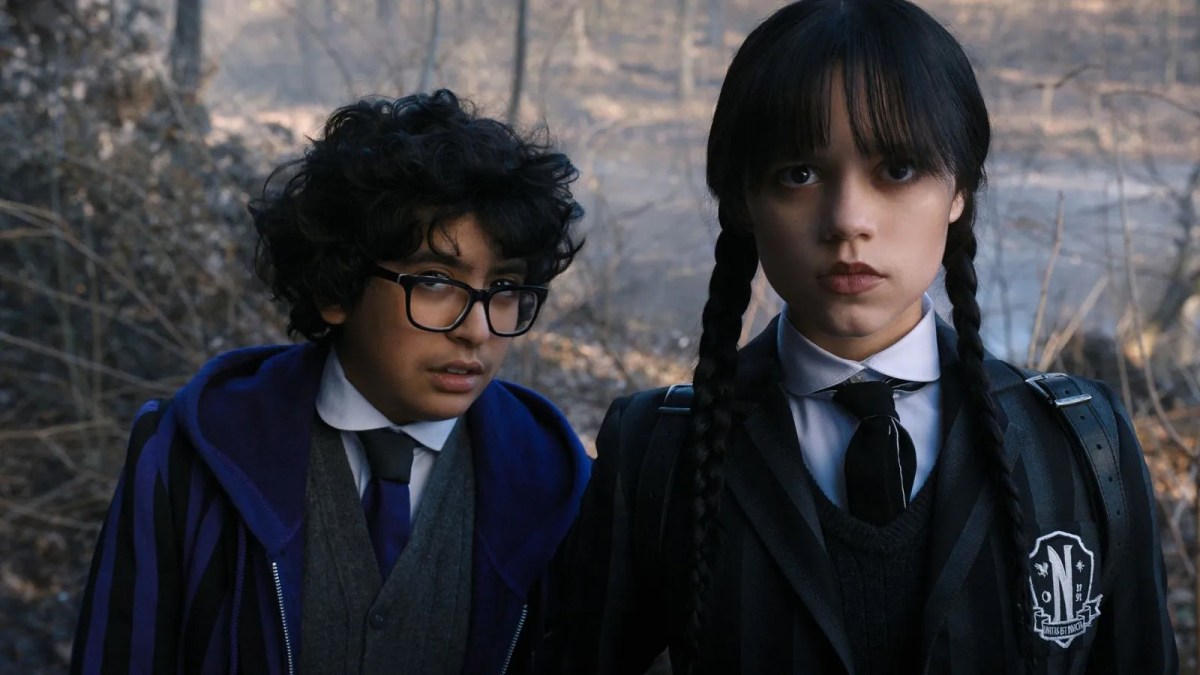 Of course, the Sonnenfeld movies made it clear that Wednesday was an incredibly intelligent young woman with little patience for hypocrisy and conformity. This aspect of the character carries over to the series, but without the sociopathic edge that made Ricci’s interpretation of the character so compelling. In the films, Wednesday is repeatedly shown attempting to murder her younger siblings, and she seemed more offended by idiocy than by injustice.

Even beyond its approach to the title character, Wednesday leans into the tropes and conventions of superhero storytelling. It’s no surprise that the show comes from Smallville co-creators Alfred Gough and Miles Millar. It also makes sense that critics have consistently compared Wednesday to The CW’s slate of superhero and supernatural soap operas. The series is populated with characters who have special abilities and is even driven by a central prophecy concerning the show’s lead.

Indeed, another major departure from previous iterations of The Addams Family comes from the setting. Wednesday unfolds in Nevermore Academy, a school for monsters. Previous adaptations of the Addams Family leaned into the film’s weirdness in contrast to the world around them, never really explaining oddities like Thing or Cousin It, and casting the characters in contrast to more “normal” antagonists like Abigail Craven (Elizabeth Wilson) and Debbie Jellinsky (Joan Cusack).

In contrast, Wednesday throws its lead into an entire school of monsters and oddities. However, these creatures are all handily classified and codified, with the high school cliques breaking down into “Fangs, Furs, Stoners, and Scales.” (That’s vampires, werewolves, gorgons, and sirens.) In contrast to the deliberately loose and ambiguous mythology of earlier Addams Family stories, Wednesday is built around the lore and continuity that major properties are now expected to have. 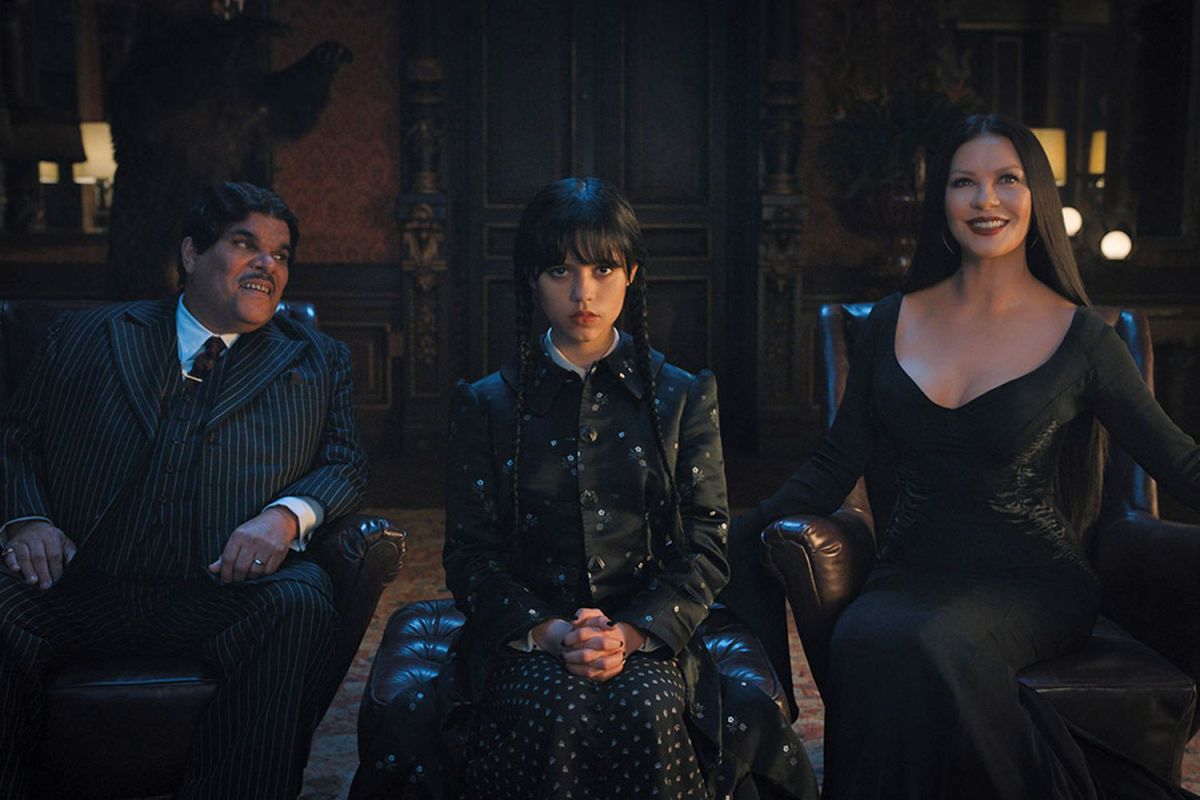 This obviously somewhat undermines the original appeal of Wednesday and her family. They were strange and odd but in a deliberately ambiguous way that allowed them to function as a broader commentary on the occasionally suffocating conformity of American life. Placing Wednesday into an environment where everybody is special, but in specific and predefined ways, undercuts a large part of the franchise’s appeal, to conform to a popular genre template.

Even the school setting feels lifted from superhero stories. The Harry Potter and Twilight franchises are an obvious touchstone here, but Nevermore Academy also evokes Xavier’s School for Gifted Youth from the X-Men franchise. Wednesday is as much a superhero show as Joss Whedon’s Buffy the Vampire Slayer. Indeed, this isn’t even Burton’s first story about a superhero-inflected school for supernaturally gifted youths. It feels like a companion to Miss Peregrine’s Home for Peculiar Children.

Then again, maybe it isn’t a surprise that Wednesday feels so much like a superhero show, given the extent to which superhero media has colonized pop culture. The Marvel Cinematic Universe is the most successful movie franchise in history, so of course other studios are chasing it. Hollywood is very good at emulating successful ideas and beating a variety of concepts into the shape of whatever happens to be popular in a given moment.

Wednesday is just the latest example of this “superherofication” of popular culture. It happens across genre lines, as demonstrated by the “Marvel-ization” of the recent Mortal Kombat reboot. It happens with older templates, with Frozen fusing Disney’s princess and superhero movies. It even happens with classic mythologies, with Guy Ritchie’s King Arthur: Legend of the Sword bending Arthurian legend to “well-established superhero genre conventions.” 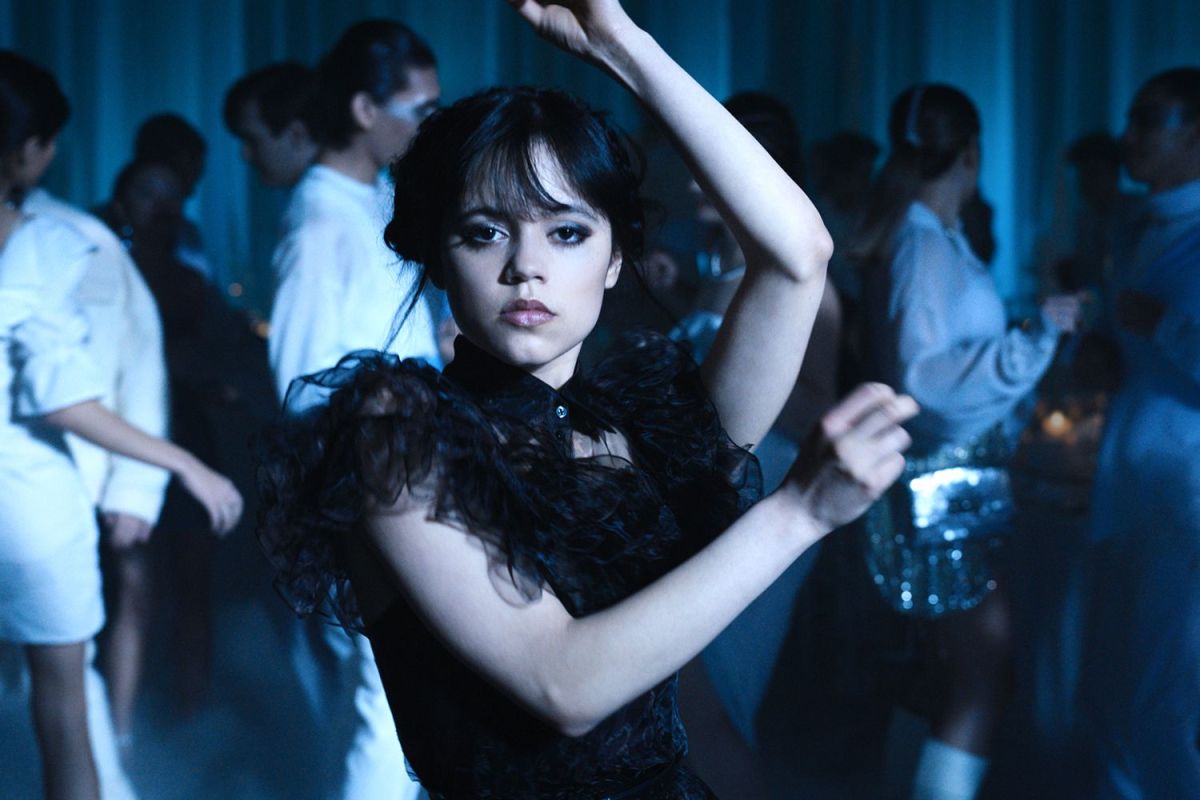 It’s a trend that has become so ubiquitous that it’s difficult to even notice anymore. It is also, perhaps, just the embrace of a proven story structure. After all, the box office success of the original Star Wars led Hollywood to embrace Joseph Campbell’s monomyth structure as a reliable narrative template. More recently, Hollywood has embraced the structure outlined by Blake Snyder in Save the Cat!. Hollywood likes formulas, particularly when investing millions of dollars in a project.

The problem is that the tropes of superhero stories are more specific than the broad strokes of Campbellian monomyth or Snyder’s cat-saving. As such, they are less universal. Imposing those trappings on a different kind of story means erasing something distinctive and replacing it with something generic. While Ortega does good work in the role, this version of Wednesday Addams has as much in common with the heroes of The Flash or Arrow as she does with her past selves.

This can be both exhausting and depressing. Much has been written about how superheroes dominate pop culture, with Marvel Studios producing more content in the past two years than it did in the previous 12 and even fans of the studio beginning to feel worn out. Superheroes feel ubiquitous and inescapable. The trend even warps stories outside the genre. It isn’t enough for Wednesday to be a nostalgic piece of intellectual property; it also has to be a superhero story.

Wednesday Addams used to be creepy and kooky, mysterious and spooky, not to mention all together ooky. These days, she’s just like everybody else on television.