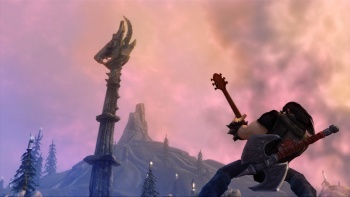 Boggling at the ongoing feud between Activision and Brütal Legend as it enters its latest circus tent of bad blood and sour grapes, I join the crowd that has a very hard time not decrying Activision as a manifestation of Stygian evil. The company, which seems impervious to both criticism and the cleansing power of holy water, has laid out a clear scorched earth strategy that focuses like a laser beam on key franchises while trying to utterly destroy any competition.

But, quarrelsome though it may be, it is a strategy that has paid off, and arguably propelled them into the lead position in the growing business of video games.

Activision – officially Activision Blizzard – is unapologetic about its approach to publishing games and only exploiting franchises that have the potential to carry long term revenue. While many gamers criticize the creative bankruptcy seemingly inherent in the strategy, from a passionless perspective of market growth and business strategy it seems unimpeachable.

Rounding the clubhouse turn of 2009, the company looks poised to rake in obscene piles of cash simply by coughing up another Guitar Hero here or Call of Duty there. While other major houses are scaling back, Activision is growing like an underarm sweat stain on a summer’s day.

So, is Activision evil or is everyone just pissed off that they’ve got the balls to be number one?

The story is old as time, frankly – the son of a bitch always one step ahead not because he’s a hard worker, or because he’s particularly smart. He’s just takes it, whatever _it_ is. Call it aggressive, smart or mean it is the b-line to success. It makes you competitive and able to withstand the harsh realities of an unforgiving corporate climate. It’s the difference between a peck on the cheek and sleeping with the prom queen. It’s the disparity between driving a BMW and a Hyundai. It’s getting the Glengary leads, and some coffee.

And when we see someone or something with _it, hate comes easy.

The reality is that if it’s just about games, then Activision is in the strongest position to profit over coming fiscal year. Whether the era of banging on plastic controllers in tempo with pop songs should be over or not, Guitar Hero is essentially Activision’s Madden, only instead of releasing it every August they release it every full moon. Call of Duty: Modern Warfare 2, or as I like to think of it Call of Duty 4 2 is virtually guaranteed money in the bank, and of course there’s the impending release of Starcraft 2, another World of WarCraft expansion and eventually the possibility of Diablo 3 to shore up 2010. Add to that Band Hero, DJ Hero, Tony Hawk Ride, Marvel Ultimate Alliance 2 and Singularity, to say nothing of the movie-tie-in flavor of the week, and you have at the very least the most reliable release list in gaming.

The argument against jealousy for shrewd business is not, given the evidence, particularly strong if the only indictments of Activision are that:

? They only release profitable games
? They vigorously protect their properties
? They are intensely selective in exploring new franchises
? Bobby Kotick is kind of a dick sometimes

The publisher is clearly not trying to be your friend, but is that so bad? Sometimes I think the industry gets so busy convincing us how cool they are that they fail to actually be good businesses. Activision has figured out that pissing off the executive gamer base and the occasional enthusiast blog doesn’t really translate into loss if you are targeting games designed to sell to the broadest possible market.

And that’s the key point. While Activision may seem to be extending a rather rude hand gesture to the well informed and educated gaming market, they are very clearly embracing the larger portion of the market. As we lean against the wall sulking about Brütal Legend, bad mouthing the PS3, underhanded tactics against Rock Band, overcharging the European market and a thousand other burning papercuts, Activision is getting in the car with the prom queen, or in this case the casual gaming market.

And, oh yes, they are going to be doing exactly what you think later on.

Evil? I dunno, maybe. Bullies for sure, but also cunning, devious, unapologetic, aggressive and successful. As long as they keep walking the walk, moving millions of copies of tired rehashed games off store shelves, it will be hard to find credible complaint. I may not like how Activision swings in the marketplace, but then again, I’m not a shareholder.

Frankly, I kinda wish I were.

Sean Sands is a professional writer, co-founder of gamerswithjobs.com and a recovering Guitar Hero addict.