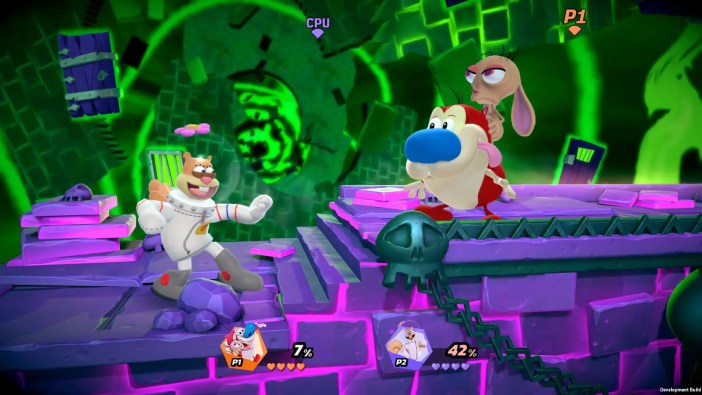 GameMill Entertainment, Ludosity, and Fair Play Labs have unleashed a new trailer for Nickelodeon All-Star Brawl, revealing Ren & Stimpy as the Super Smash Bros.-style fighting game’s latest challengers. The crass duo, just as with many of the crossover’s other cartoon characters, bring lots of attacks that fit their fighting style and reference different moments from the show. Ludosity project manager Joel Nyström has provided a breakdown of some of those moves in a PlayStation.Blog post.

Ren & Stimpy are a bit different from the other fighters in Nickelodeon All-Star Brawl, with both characters using each other to deal damage while still serving as a single playable fighter. Those who have played as Super Smash Bros. Ultimate’s Duck Hunt or Banjo & Kazooie characters will probably find themselves at home here. See the Ren & Stimpy gameplay reveal trailer below.

Ren & Stimpy are only the latest to join Nickelodeon All-Star Brawl’s growing cast of famous cartoon characters. When GameMill, Ludosity, and Fair Play Labs announced the brawler back in July, classic faces such as SpongeBob SquarePants and Danny Phantom were revealed as playable characters, along with even more recognizable toons from shows like Rugrats, Teenage Mutant Ninja Turtles, Invader Zim, and Hey Arnold!. April O’Neil and CatDog were additionally announced last month, with more fighters promised for the future.

Though Ren & Stimpy’s Nickelodeon All-Star Brawl debut is exciting, it shouldn’t be too much of a surprise considering their superhero counterpart, Powdered Toast Man, had already been confirmed as well. Ren, Stimpy, April O’Neil, CatDog, and the rest of the Nickelodeon All-Star Brawl cast will be playable when the fighter comes to PC, Nintendo Switch, PlayStation 4, PlayStation 5, Xbox One, and Xbox Series X | S sometime this fall.