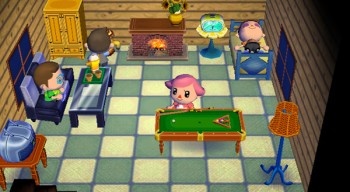 Nintendo of America President Reggie Fils-Aime says the company has no intention of bringing out a new console any time soon, because hey, things are going pretty darn well just the way they are.

In an interview with Reuters, Fils-Aime said the “cautious optimism” expressed by many executives at the BMO Capital Markets Interactive Entertainment Conference was appropriate for the videogame industry as a whole, but from Nintendo’s perspective things are “very optimistic.” The Wii continues to sell out regularly, he said, while the DS is experiencing nearly 20 percent growth even on a “record year” in 2007. “It very well may be that for the month of October, our sell through on Wii may have been the best ever holiday sell through for the month of October on any console in American history,” he said. “That’s what gives us the belief that if we simply execute we should have a strong holiday season.”

On that topic, he expressed hope that this will be the year Nintendo can finally meet consumer demand for the chronically short console. “Our goal is to have every consumer who wants a Wii console or a DS to be able find it during the holiday. We have increased by 50 percent the amount of product that is coming into the U.S., Canada, Latin America. We hope that that is enough product,” he said. “But even with the strong sales that we have seen in October and so far in November, we are still suffering out of stocks. My message to the consumer is, if you see a Wii and you are interested in a Wii this holiday, buy it as quickly as you can.”

Regardless of how the inventory situation unfolds, one thing consumers shouldn’t expect is a price cut. Fils-Aime said Nintendo’s consistent domination of the sales charts are evidence that its “value equation is finely tuned” already, and that price cuts simply aren’t necessary. And looking to the future, he claimed Nintendo had no intention of introducing new systems for a long time to come.

“We believe the role of a new console, a new system, is to bring great new entertainment ideas to life. We launched [the Wii and DS] when we had great ideas that would benefit either from a touch screen or from a Wii remote,” he said. “We will consider the launch of new consoles when we have got great new entertaining ideas that can only be done with a new console. As we sit here today the Wii console has a long run ahead of it. At some point we will launch the DSi here in the Americas. So as we look at the near term for us its all about maximizing the opportunity with the [Wii and DS].”

No great surprises here, then: The Wii still prints money and Nintendo doesn’t want to mess with it. Resting on your laurels is never a good long-term strategy, but when your biggest worry is whether or not you’ll be able to crank your stuff out fast enough to keep people happy – for the third Christmas in a row, no less – then I think you’re allowed to bask in the moment a bit.