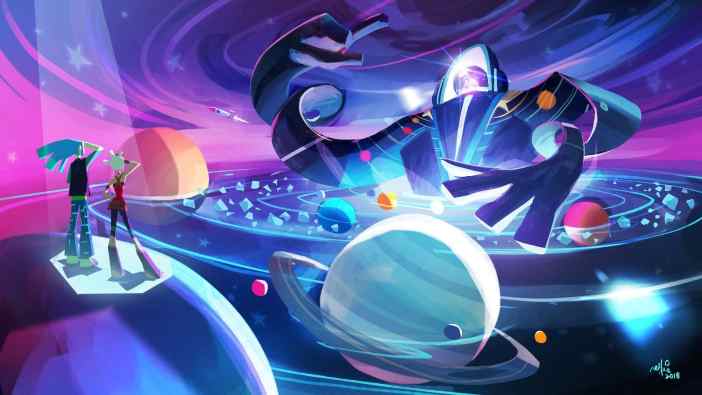 I’ve been looking forward to No Straight Roads (NSR) for quite some time now. The premise of a punk rock revolution versus an EDM authoritarian regime drips with Double Fine levels of zaniness. Mixing in God of War-like boss battles set to the beat of fresh tunes was all the more enticing. Wrap that all up in a gorgeous Psychonauts-esque aesthetic of bright colors and giant heads and limbs, and it’s easy to see why NSR has so much potential. Now if only it weren’t constantly at war with itself.

To say No Straight Roads’ opening hours are wildly inconsistent is putting it mildly. Where zany and over-the-top guitarist Mayday screams almost every sentence, her drummer Zuke barely reacts to anything. The world is animated beautifully, but the writing can be cringeworthy. The lively marquee boss battles are interspersed with sections of lifeless 3D platforming. An excellent soundtrack is made to be only set dressing, as having good rhythm barely seems to be a factor towards victory. You can explore city hubs between fights, but each area is so cramped that there’s hardly a point to them. There are three different styles of cutscenes, each with a different style of animation and presentation.

No Straight Roads is just too scattered for its own good. I don’t think players would miss the lifeless city hubs, especially since your underground sewer base has 10 times the personality. The musical themes are great, but it’d be better to either double down on rhythmic gameplay or just remove that element and be a pure rock ‘n’ roll God of War clone. Worst of all, the animation prompts for some timing-based sections where you either deflect or attack need serious adjustment. I often had to act either before or after the visual prompt indicated I should react. Some are so wildly unclear, one involving a barrage of fishy-cracker arrows, (It’s a long story.) that I just took the damage and healed myself afterwards.

Another pass on the dialogue wouldn’t hurt either. No Straight Roads clearly knows what it wants its humor to be like, but it never finds a strong melody. Our heroes’ jokes are tired and flat when they should be stealing the show. The only running gags seem to be that Zuke is a stoner and Mayday overreacts to everything while typically missing important information. They do the latter a lot, until it’s been just long enough that Mayday catches on, as if that makes it funny, even if it’s the fifth time in less than an hour.

What makes this all the more confusing is that the villains are typically amusing. Their jokes don’t always land, but they tend to ironically be less grating than the heroes, especially Mayday. I wouldn’t harp on that if NSR weren’t constantly jamming fully voiced, often unskippable dialogue right in my face. Most friendly NPCs get a line of dialogue at most despite their intriguing character designs, but you’ll get insights on sewer gator footprints from Mayday.

This is a shame because when No Straight Roads gets out of its own way, the amazing game I know it could be is front and center. While it’s weird to have three versions, each style of cutscene looks great. The soundtrack is absolutely superb, with guest artists perfectly in sync with the game’s original score. Despite its static environments, the world of NSR begs to be explored further, packed full of potential. Boss stages embody their respective genres perfectly, whether it’s sending players dashing across spinning records or spiraling through a J-Pop music video. In particular, NSR’s first boss, DJ Supernova Subatomic, is instantly iconic. 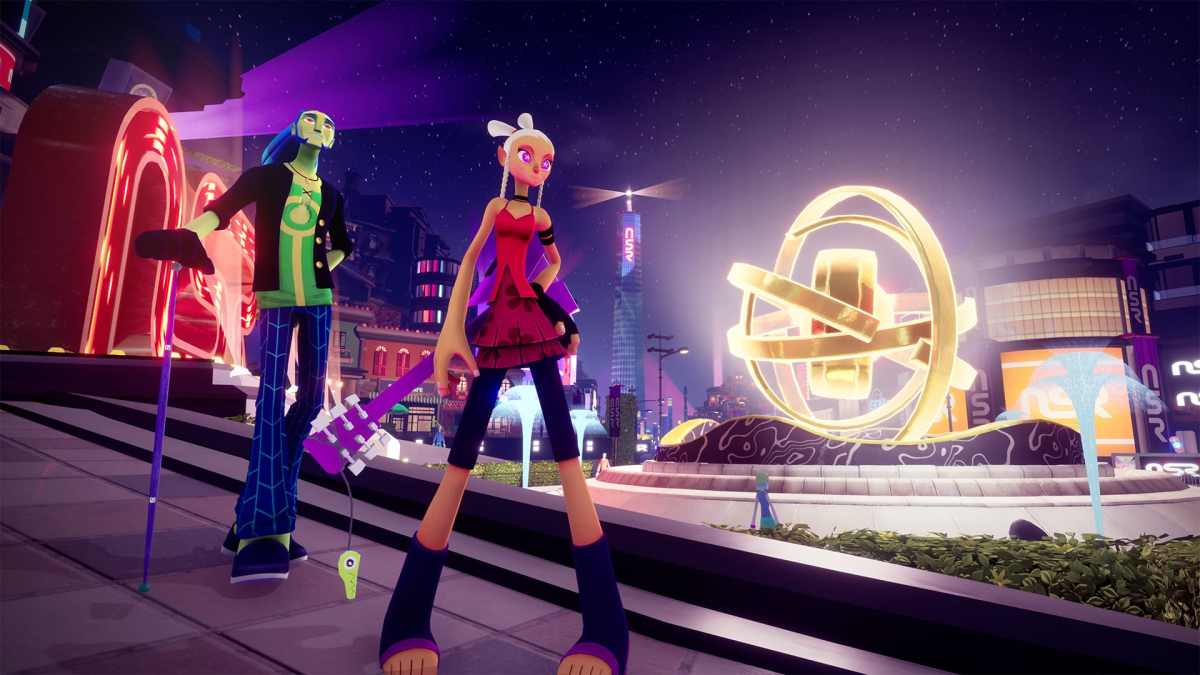 The rock solid visuals of the observatory-turned-dance club get you immediately in the flow of things, and it’s incredibly satisfying when you send the DJ’s energy sphere head flying into space. Fighting the solar system to get at him is a treat, dodging spiraling planets and firing off rockets to chip away at his health. A few sections could still use a little tinkering, but the communication is far clearer than in the later stage against the game’s Hatsune Miku stand-in, SUYA.

The SUYA boss fight is a perfect example of No Straight Roads misreading its own potential. You have to disable SUYA’s creative team so they can’t pilot her anymore, in theory taking them down one at a time. Instead, all you really do is navigate a series of increasingly dangerous platforms to bash some terminals. Why not instead have a unique stage symbolizing each member of the team keeping SUYA going? Like, maybe brawl with the mo-cap artist, then dodge the lyricist’s vocal blasts in an escape sequence, and so on. Instead, it’s another tangled mess of odd decisions. 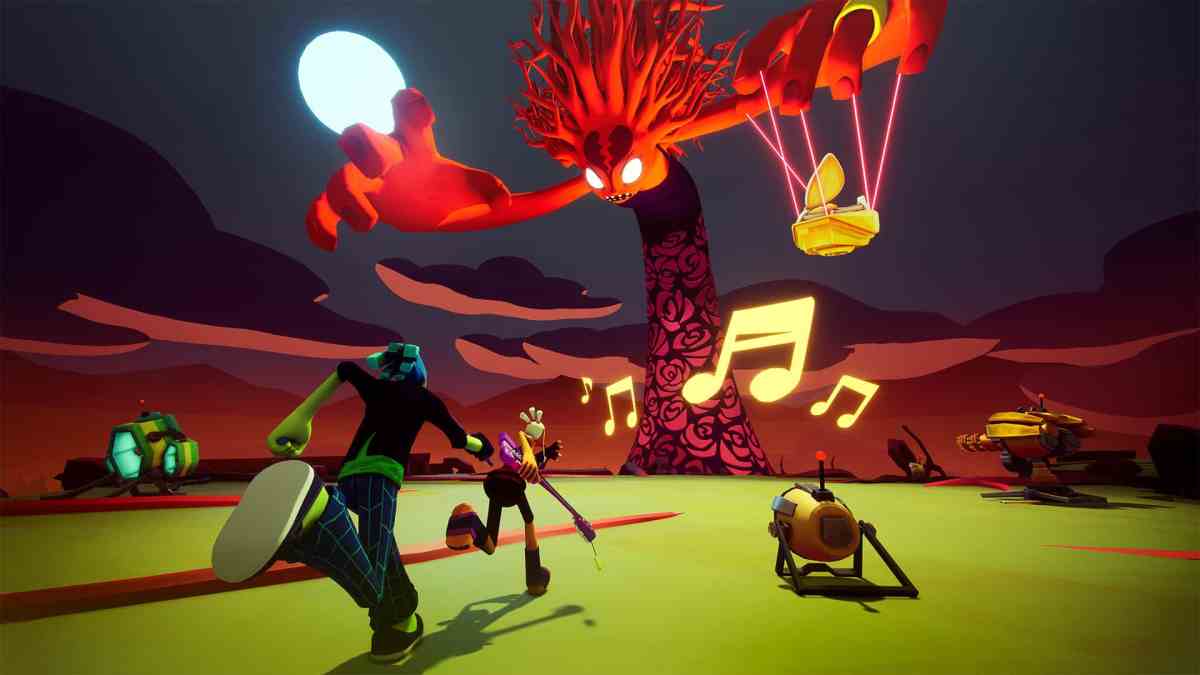 Crystalizing this confused approach is a tiny arcade game in your hideout that’s genuinely fun enough that I’d buy it on itch.io as its own game. You play as this tiny flying wolf who can either move or shoot depending on the beat of the song. Enemies all follow the same rules, just asynchronous to you, moving when you shoot and vice versa. It’s a turn-based bullet hell, and it incorporates rhythmic elements better than the main game.

I spent a half hour without even realizing it playing a minigame, because it was consistently more fun than the main game. I don’t think that’s ever happened before, and I wish the rest of the game had filled me with that sense of joy. As it stands, I still want to root for No Straight Roads. It’s got a ton of promise and it does shine at times, but it’s not rocking or rolling yet.

No Straight Roads will release on Aug. 25 on Epic Games Store, Nintendo Switch, PlayStation 4, and Xbox One.