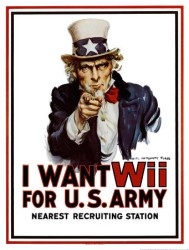 A new non-profit organization called Fun For Our Troops has been formed to provide gaming systems and software to U.S. troops serving overseas.

Founded by Stefanie Shea, wife of U.S. Army Sergeant Michael Shea, the organization says the games will help with relaxation and stress-relief between missions, boosting their morale and overall well-being. As soldiers return home from deployments, the gaming equipment will stay behind to be passed on to others. The idea was formed during conversations with her husband, who was deployed to a second 15-month tour in Iraq despite his army contract ending only weeks after he was scheduled to ship out. Following that, Shea enlisted the assistance of consultant Dana Brady, who is married to a former U.S. Army Ranger.

“What they really appreciate over there is the true comforts of home,” Brady said. “The stress relief and escapism involved in these games, we really think could be beneficial.”

Brady is planning to contact companies for donations, but the organization is also actively soliciting support from the general public. The group intends to provide the gaming equipment as it becomes available throughout the year, but is also trying to put something together for in time for Christmas despite the pressing time limit. “We’re hoping to get them throughout the year,” Brady added. “We don’t want to have (soldiers) wait. We do foresee the issues with Christmas. It’s going to be a crunch for those games.”

Donation links, contact information and other details can be found at the Fun For Our Troops website.