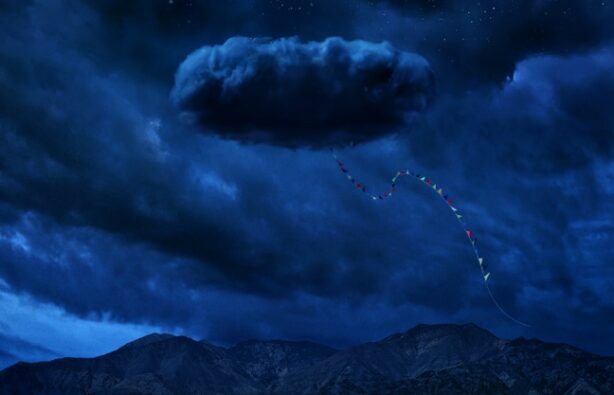 When we first heard about Nope, we got very little information, which is probably best for a Jordan Peele film where unpacking the movie is part of the experience. However, the first trailer for Nope debuted early this morning, and now we know a lot more, such as that, while it’s still a horror movie, the director is verging into the realm of science fiction and alien invasion.

The film takes place in a remote gulch in California where a black-owned horse training facility is located. The residents of the area, played by Daniel Kaluuya (Get Out, Judas and the Black Messiah), Keke Palmer (Hustlers, Alice), and Oscar nominee Steven Yeun (Minari, Okja), are witness to something very strange. Whatever it is isn’t fully revealed, but with this trailer and Nope being described as Peele’s reimagining “the summer movie” and an “expansive horror epic,” it sure feels like aliens.

Of course, this is a Jordan Peele film, so it’s not just about an alien invasion. There’s already plenty of subtext running through the trailer itself with Palmer playing a descendant of the first man “on film.” Just how this all unpacks and whatever twist is waiting for us is obviously not revealed here, but one hint might be the idea that Nope is actually an abbreviation for “Not of Planet Earth.” Although, the title also functions as the classic response of minorities in horror films when confronted with the killer and they are the only ones smart enough to “nope” out of there (though they seldom make it).

Peele wrote and directed the movie, as he is wont to do, and it is being produced by his long-time collaborator Ian Cooper. Michael Wincott (Hitchcock, Westworld) and Brandon Perea (The OA, American Insurrection) also star.

Nope release on July 22 in theaters.