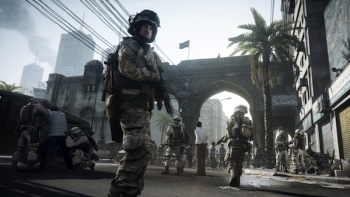 A couple of Norwegian gaming sites caught up in deny that any sort of shenanigans have taken place.

It came to light a couple of days ago that Electronic Arts may have jerked around a few Norwegian gaming sites in order to ensure the best possible review scores for Battlefield 3 on launch day. Questionnaires were allegedly sent to sites including Gamer.no and Gamereactor, both heavyweights in the Norwegian market, in advance of review copies of the game, asking some rather pointed questions about the reviewer’s predisposition to the Battlefield franchise and its Activision rival, Call of Duty.

But now things seem to be moving from “slightly greasy” to “full-on confusing” as two of the sites involved in the controversy, the aforementioned Gamereactor and Gamer.no, have both issued statements disavowing any pressure from EA. “We have received a preview code and have not had any problems with EA. We have had nothing to do with the ‘shenanigans’,” a Gamereactor rep told Blue’s yesterday. “It seems to be a matter between EA Norway and a major newspaper, why dedicated gaming media are mentioned also must be a misunderstanding.”

And now Gamer.no has come across with a similar statement. “This is not true. EA have never refused to give Gamer.no access to a early review copy, and we did not need to answer any leading questions from EA to obtain it either,” it said. “In fact our copy is shipped already, and should be in our hands tomorrow. There have never been any disagreements between EA and Gamer.no on this case.”

It’s good news that EA isn’t out there trying to play games with review scores but what gives the case a whiff of oddness is the fact that the publisher has already apologized for doing it. I suppose it’s possible that the PR guy who issued the apology was just trying to get ahead of the game, or maybe, as Gamereactor suggested, EA was simply trying to ensure that a mass-market newspaper didn’t hand the job of reviewing Battlefield 3 over to the guy who normally does the bi-weekly bridge club reports. But on the surface of it, it’s a little weird that one half of this tango says it’s sorry for something the other half claims never happened.