The reaction to last week’s article was about what I expected: Lots of people outraged about how poorly Fallout: New Vegas ran. (If it did.) And then other people being outraged that the first group was outraged. The latter were upset with the former for… experiencing bugs? Not enjoying them? I don’t know.

But I want to address a few of the objections to my column. Like so:

I didn’t experience any of the “problems” you supposedly had. The game ran great for me!

So… are the rest of us lying? Are these thousands of irritated gamers part of some vast conspiracy to make Obsidian look bad, just because?

As I said last week, PC hardware is a complex business and I’m sympathetic to the effort it takes to get things running on all of those different machines. If you’re not one of the affected people, then rejoice and enjoy your game. But if you want me to enjoy the game then you need to mail me your computer, because it doesn’t work right on this one.

It’s not Obsidian’s fault the game crashes! Your computer sucks!

In the process of doing this column, my website, my video series, and my webcomic, I end up playing a lot of games. Over fifty a year, if we include demos and other games that I toy with for a few hours and forget about. None of those games seem to malfunction the way New Vegas does. New Vegas is the most buggy game I’ve played in years.

You didn’t talk about the good parts of the game, you just raged on about bugs! This was completely biased and unbalanced.

If you look carefully at the end of this column, you’ll notice that there is never any review score. That’s because this is an opinion piece written by a pundit and not a review written by a journalist. If you want a review, then Russ Pitts has you covered. (Hint: His only complaint is that the game is buggy.)

But I really dislike this absurd mindset that you’re not allowed to discuss the bad parts of the game unless you balance it out with the good. I can only imagine what it must be like to have a conversation with these people.

Bob: YOU DIDN’T MENTION HOW GOOD THE SPECIAL EFFECTS WERE. YOU ARE BIASED AND YOUR OPINION IS INVALID.

So, everyone knows about this so we … shouldn’t discuss it? The fact that “everyone” knows about it should be a pretty big clue that this is a widespread problem. It’s just as valid a topic for conversation as Bobby Kotick, DRM, or any of the other things I talk about every week.

But more importantly, everyone doesn’t know about the problems with Obsidian. New gamers are growing up or joining the hobby all around us. A college freshman playing New Vegas right now would have been thirteen years old when Obsidian released KOTOR II. And believe it or not, most people smack the escape key when the developer and publisher splash screens appear. Not everyone follows this stuff, and an article discussing the behavior and trajectory of this company would be both interesting and informative for those sorts of people. 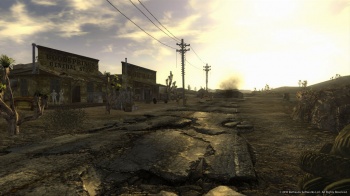 This isn’t fair to Obsidian, they inherited a buggy engine from Fallout 3!

It’s true. Fallout 3 was a mess. I spent fourteen hours on a video series, nitpicking that game from start to finish. I also made fun of it in my comic. Believe me, I know all about the problems with Fallout 3. I don’t know why that game got a pass from so many people, but it didn’t get a pass from me.

But that doesn’t mean we should ignore the problems with New Vegas. As long as consumers are paying for the game, they have a right to expect that the game (remember that you can’t return games) actually work properly.

I didn’t say anything about how fun the game is. I agree that it is far superior to Fallout 3. But wouldn’t it be more fun if it was more stable? Wouldn’t that be better for all of us, including Obsidian?

It’s not Obsidian’s fault! You should blame the publisher!

Then why is BioWare able to release stable games, even when dealing with those same publishers that allegedly ruined Obsidian’s work? Why do other developers working with (say) Atari not have the same problems that Obsidian did?

When a project is begun the developer agrees to a given timetable and budget. “We’ll make X game in Y months using Z dollars.” A contract outlines these obligations, and they sign it. Every one of their games has come from a different publisher, for a different franchise, using different tools. The only common element in all of the buggy Obsidian games is Obsidian Entertainment itself. They have failed to deliver a stable game four out of four times now (discounting the expansion packs, which were reportedly good) and so I think it’s time the blame fell on the people doing the over-promising and under-delivering.

You’re picking on Obsidian! I love their games and you’re just a big mean hater-face.

I’m writing about the game and the company because I care about them. If Epic had released Gears of War games that destroyed save files, crashed, glitched out, and suffered from wonky mechanics then I’d probably leave it to experienced fans to write about it, because it’s not my thing. But I’m an RPG fan, so I’m writing about Obsidian.

There aren’t that many hard-core western RPG developers left. Shouldn’t we be demanding better? First person shooter fans can pick and choose among many games and developers, but fans of freeform exploration, branching plots, and complex leveling mechanics don’t have that many options. I don’t want to see Obsidian go under. I want to see Obsidian deliver a top-notch game that’s not infested with bugs and glitches. This is simply not going to happen as long as gamers continue to accept sub-standard quality and make excuses for them.

Xbox Live Used for a Billion Hours Every Month