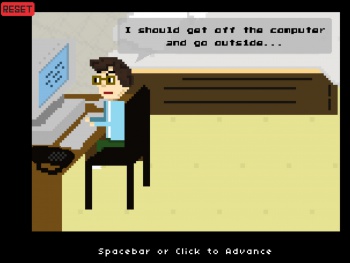 Okkervil River is what the unrefined masses would describe as “hipster pabulum” (assuming they have any idea what “pabulum” actually means). Truthfully, they’re one of the best indie pop groups currently in existence, and even their worst albums are far better than most of the memetic trash you’ll find stapled to any given telephone pole in my hometown of Portland, Oregon. When the group issues a new album, that alone is reason enough for excitement, but when that album is being cross-promoted alongside an 8-bit retro adventure game a la King’s Quest or Leisure Suit Larry, that’s something completely novel. And if this game was crafted by Okkervil River frontman Will Sheff? Well, that’s reason to sit up and pay attention.

The album is entitled The Silver Gymnasium and is slated for release on September 3, courtesy ATO Records. The game is likewise titled The Silver Gymnasium, and features chiptune renditions of tracks from the album which serve as the title’s score. The best news here is that while you’ve still got a bit of a wait for the record to drop, you can play the videogame right this very minute. The Silver Gymnasium is being released in episodic chunks, and the first chapter can now be found at the game/album’s official site. It’s totally gratis, so you could easily consider this either a clever promotional effort or simply a generous offer from a musician with legitimate geek roots.

If you dig this first bit of the game, there will be further episodes released every two weeks for the foreseeable future. I’ve yet to play it (what with being stuck writing this text for you people) but even if the game is terrible, Okkervil River’s music is usually great, and again, how often do you see famous musicians building their own videogames for no other reason than affection for the medium? You should support the idea purely based on novelty (and also to impress quirky, sexy people with thick-rimmed glasses in the aisles of your nearest Whole Foods).