Since this week is The Escapist‘s Indie Developer Showcase, I’ve been thinking a lot about indie games and the people who make them. I’m particularly smitten by Terry Cavanagh’s VVVVVV, the latest mind-bending platformer to take the indie world by storm. For anyone who believes that completely fresh game designs are impossible four decades after the medium’s inception, VVVVVV provides plenty of evidence to the contrary. Every room feels like it was painstakingly constructed to provide an entirely new take on the game’s signature gravity-flipping, space-warping mechanics. I can’t remember the last time a game has so consistently surprised and elated me.

Yet each time I’ve enthusiastically recommended VVVVVV to one of my friends, I’ve added a single damning qualification: It’s probably not worth $15.

On the face of it, it’s an absurd claim. I could truthfully call VVVVVV one of my favorite games of the year so far (and it hasn’t been a dull month for new releases). I’ve played through it once, which occupied about three hours of my time, and I intend to have a second go ’round after I’ve found all the game’s collectible trinkets. I’ve even bought the soundtrack, PPPPPP, which I’m happily bouncing along to right this moment. It’s a pretty safe assumption that I’ve gotten more than fifteen bucks worth of value from my purchase.

But VVVVVV is not a game for everyone. For one, it’s absurdly hard. Years of playing Mega Man in various friends’ basements while they begged me to go outside have made it impossible for me to give up when faced with a near-impossible challenge – a handicap that I recognize many do not share. Then there’s the retro-minimalist visuals, which will likely prevent anyone who demands a veneer of verisimilitude with their gameplay from enjoying it. (Personally, I think the simplistic graphics give you a less obstructed look at a seriously brilliant design.) And if you don’t enjoy electronic music, you might not be moved much by Souleye’s completely bitchin’ chiptunes grooves. In fact, I have to concede that, without ever having met me, Terry Cavanagh may have created a game that caters exclusively to my bizarrely specific tastes – in which case I probably owe him a lot more than $15.

So what is VVVVVV worth, then? For that matter, what is any indie game worth? That’s a question that I imagine a lot of solo developers struggle with. For one, there’s simply no consensus on the matter: Unlike AAA titles, which we’ve been conditioned to believe are worth $60 even when they’re obviously not, you can find great indie titles from anywhere between $20 and completely free. Then there’s the matter of perspective: Publishers have entire departments dedicated to making sure a game’s budget doesn’t exceed its projected revenue, while all indie developers have is the memories of a hundred miserable, sleepless nights in front of a computer screen when they sit down to calculate the “costs” of their project. Indie game development is still a business, yes, but when the same person who spends a year on his labor of love is forced to put a price tag on it, there’s no wonder it can sometimes feel a little wide of the mark. 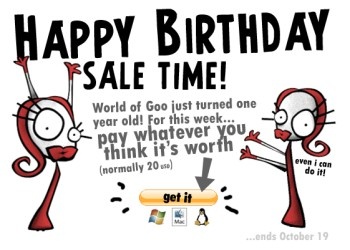 But it’s not just the price-point that’s up in the air for indie developers – it’s the entire retail model. Chalk it up to their “experimental” nature, but many indie designers have eschewed the standard “X dollars equals one game” method of selling their wares in favor of much more unorthodox means. World of Goo developers 2D Boy recently put their flagship title on sale for the low, low price of whatever you felt like paying, while Australian developer Farbs (whom we featured in our Indie Developer Showcase earlier this week) has employed a subscription model in which $20 gets you immediate access to his first game, Captain Forever, and all subsequent releases. And then there’s Cactus, a Swedish developer who’s made his entire catalogue of games available for free and subsists entirely on donations.

All this is to say that it’s not only pointless to try and compare the objective value of one indie game against another – it’s actually impossible. But that doesn’t make the question of value any less pressing, or the expense of guessing wrong any less costly. Some developers, like Cavanagh, are pricing their games out of reach of plenty of people who would likely try them and love them if they could justify them as impulse purchases. Others, like Derek Yu and Cactus, are releasing years’ worth of hard work and not making a penny for it. I can’t speculate on the individual economic circumstances of an entire group of people with whom I’ve only communicated by email and phone, but my fear is that these creators will spend their “starving artist” years making huge strides in the art and craft of game design, only to be forced to leave their passions behind once their real-world financial obligations start to stack up.

This isn’t about bowing down to gamers’ sense of entitlement. It’s about making sure that the developers who are at the vanguard of game design are making enough to push forward even further. Terry, we both know VVVVVV is worth more than $15, but it needs to cost less. And Cactus, if the choice is between making money and making art, for the love of God, start charging for your games!

Jordan Deam actually believes one VVVVVV is greater than or equal to a thousand Rogue Warriors.