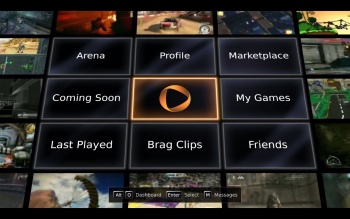 OnLive launched more than two months ago, so is it worth taking a look into the cloud?

First off, this isn’t meant to be a definitive review of OnLive, but a casual impression based on around fifteen hours of using the service. OnLive is bound to evolve as its creators figure out how to use the technology they have. However, we can certainly make a judgement of OnLive based on what is available at the current time.

Quick overview: OnLive is a cloud gaming serivce that streams videogames you would normally play on a PC or Mac (or console) to that same computer from OnLive servers, negating system requirements. The only requirement is a wired broadband connection. Simply install the service and you can start playing right away after you’ve made a game purchase, though OnLive recommends that users have a dual-core CPU and a monitor that can display 1280×720 resolution.

The big question is: Does it work? Yes, actually. Testing it from my home (not a secret OnLive testing facility) OnLive works really well. Forget latency tests: I didn’t notice any lag at all between my input and the actions on screen. It was as if I had installed Mafia II (released the same day as retail) and was making my rise through a criminal organization right here on my PC and not through the internet. I will definitively say that gamers with inferior PCs can benefit from the service OnLive provides. It was also nice to be able to start playing a game on my home computer, and then to continue it at another location (with a wired connection) through my laptop, on which the positive play experience was duplicated.

But it’s not perfect. Users of OnLive have to face the fact that access to their games is dependent on a stable internet connection. It’s not OnLive’s fault if my internet connection falters, but it’s still a factor beyond my control that I personally don’t want affecting my gaming experience. Also, you cannot leave a game sitting to go eat dinner. If a game doesn’t save your progress regularly, you may have to replay portions if you get distracted for 15 minutes or longer, because OnLive automatically disconnects idle players.

One other minor negative is that the graphics aren’t going to be as good as with an installed game at maximum settings. Comparing my home install of Borderlands to the OnLive streaming version of Borderlands, it looked like OnLive also locks its titles at maximum or near-maximum settings, but there is a small amount of blurring that occurs at times (which I also noticed in Mafia II). For people that wouldn’t be able to play these games on their computers otherwise, this is a negligible aspect of the service.

Further, the cost structure is not going to be perfect for everyone. For the current year OnLive has no monthly fee, but players must either pay full price for games for unlimited play or pay a smaller fee to receive a shorter play pass (3 days or 5 days), like a rental. OnLive users must also acknowledge that they only own their purchased games as long as they’re subscribed to the service, which will cost them at least $4.95 per month if they sign up early for their second year (after the first free year), so presumably this cost will rise for those that get in late. This makes sense, just like the monthly subscription to an MMOG makes sense, as OnLive has to keep up its servers and hardware. However, it is a factor that should be kept in mind.

Which is why OnLive isn’t for me. I built my own computer late last year, and enjoy the practice. I would rather purchase a physical or digital copy of a game that I own forever and run it on my home computer at high settings perfectly. I understand exactly what OnLive CEO Steve Perlman meant when he said OnLive is not for hardcore gamers now, but that doesn’t mean it’s not a great piece of technology, and it also doesn’t mean OnLive is not for the other kinds of gamers out there.

OnLive is for anyone with an older PC that wants to play Mafia II on that old hunk of junk right now. Don’t have a powerful videocard? No problem. OnLive is free for a year if you sign up by the end of 2010, so for now it’s simply a streaming storefront. Even if it ends up with a monthly fee of $10 or $20 a month, that fee is replacing the cost of purchasing, building, or upgrading a computer. If the average computer can produce high-level videogame performance for around 3 years, that $360 to $720 for 3 years of OnLive would probably cost less than said computer.

At the very least, OnLive is a wonderful videogame rental service, like Perlman says, and is a great way for gamers that don’t want to worry about PC issues to not have to. In a way, it brings the ease of console gaming to the PC, if users can accept the internet connectivity requirements and payment structure. The OnLive MicroConsole, which will put OnLive games on your television, also has tremendous potential, and though it’ll be tough to go up against Sony, Microsoft, and Nintendo, it should throw some spice into the mix when it launches.

OnLive has 26 games currently available from Batman: Arkham Asylum to World of Goo to Lego Harry Potter. A current deal running will give players a free game when they purchase Mafia II, so OnLive won’t be a stranger to sales and deals either. It’s not going to light the world of hardcore gamers on fire just yet, but it works, so those more casual with their PC upgrading practices could definitely benefit from what OnLive offers.