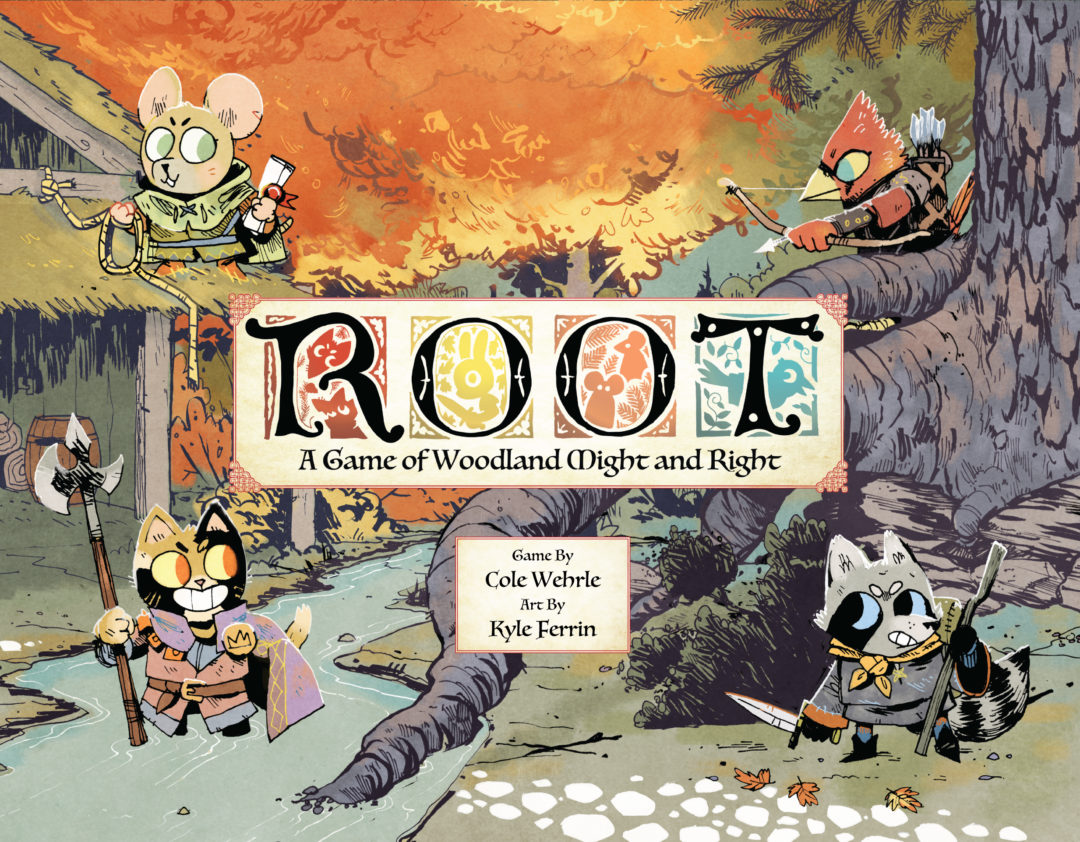 I basically never had any idea what my opponents were doing when playing Leder Games’ Root, which was named Game of the Year last month at Origins Game Fair. The Eyrie Dynasty player had an elaborate spread of cards atop his board, indicating promises his noble leader had made to his people, and was spreading roosts guarded by blue jays across the board. That meant battling the Marquise de Cat’s massive army, indicated by ubiquitous orange felines with malevolent scowls that ruled villages and manufactured tools of war. I watched both closely while building up influence as the Woodland Alliance, a rebel coalition of oppressed mice, bunnies, and foxes with the goal of ridding the forest of these warmongers. Then every once in a while the Vagabond, a roguish raccoon, would emerge from the forest and steal something, stab someone, or maybe give me a gift.

In most competitive board games, everyone is playing by the same rules and victory is determined by who has the best strategy or luck or some combination of the two. Some games introduce a little variance by having players control different factions with their own strengths and weaknesses. One might be faster and weaker; another might have fewer stronger units. But Root takes the concept of asymmetry to the extreme by giving each faction its own rules and objectives.

Leder Games first demonstrated this design style, which founder Patrick Leder dubs “total asymmetry,” with Vast: The Crystal Cavern, a game where two-to-five players try to achieve their goals by taking on the role of a knight, a horde of goblins, or even a cave. Root has players fighting for control or influence over the woodlands as warring factions or, in the case of the vagabond, a particularly ambitious individual.

The cats and birds win points by constructing structures around the map, though the rules for how they do that are unique. The ancient Eyrie Dynasty is perpetually embroiled in conflict. If their leader can’t deliver on their promises, the whole empire will descend into chaos causing them to lose resources and momentum as they choose a new leader. The cats are master builders, constructing workshops and sawmills and perpetually expanding across the land in search of more resources. The Woodland Alliance hates both armies and spreads sympathy for its rebellion across the board while training its raw troops into a force capable of leading an uprising. Meanwhile the Vagabond tries to benefit from the general chaos by making friends with various factions and opportunistically killing their enemies.

Those are just the basic principles. Each faction has its own complicated rules dictating what actions they can take, which are thankfully printed on each playboard so you don’t need to spend too much time sharing the rule book. The designers recommend that one player learns all the rules in advance and runs everyone else through a few turns where all the actions are prescribed just to get everyone used to the different dynamics. In a game where everyone’s playing by the same rules and friendly enough to explain them, you can get by with just a rough understanding if there are other people who know what you should be doing and can offer advice or at least make sure you’re not unintentionally cheating.

Of course I didn’t know that recommendation until I opened the box and decided in my hubris that we could just figure it out on the fly. And of course that led to unintentional cheating and suboptimal play. The roles are ranked in level of complexity to try to match players with the right faction for them based on their experience level and play style, but it’s still easy to make mistakes with any faction. The cats are meant to be the simplest to play, but we had to roll back a full turn when we discovered the board gaming novice playing them had misread her setup instructions and placed too many structures on the board. The cats are meant to be a dominant force, so the rest of us just assumed that her huge army was legitimate until a question about crafting led to a closer reading of the rules.

Besides the potential for cheating, gaps in player expertise can also dramatically shift the balance of the game. The birds and cats are meant to keep each other in check while the Woodland Alliance benefits from their movement across the board and the Vagabond needs the cats to be producing items that they can acquire. Root plays more like a team game than a purely competitive one in that your fate is often inextricably tied to someone else’s.

That also means you really should try to figure out what rules your opponents are playing by. Every once in a while I’d look over at the Eyrie’s absurdly complex network of decrees and ask how he was doing, and he’d smugly proclaim that his empire would have collapsed but that the cat’s most recent attack actually helped him by killing troops and freeing up resources he could use to keep his promises and then rebuild. This is a game that is befuddling at first but can become fiercely political once people have a better grasp of their rules and can try to make alliances with various technically enemy factions to gang up on the score leader and perform actions that will be mutually beneficial.

Root has immense replay value as players can test not just different tactics but entirely different rule sets by playing different factions. Leder Games has only made things more complex with a pair of expansions. The Riverfolk adds a lizard cult trying to spread their faith around the forest and the Riverfolk Company, a mercantile force of otters. The Underworld, which will hit stores in October, includes an invading force of moles and a group of spymaster crows that win by manipulating other players. I’m eager to see how these different groups change the dynamics. I’ll just be sure to read the rules very closely first so I can figure out what’s going on.