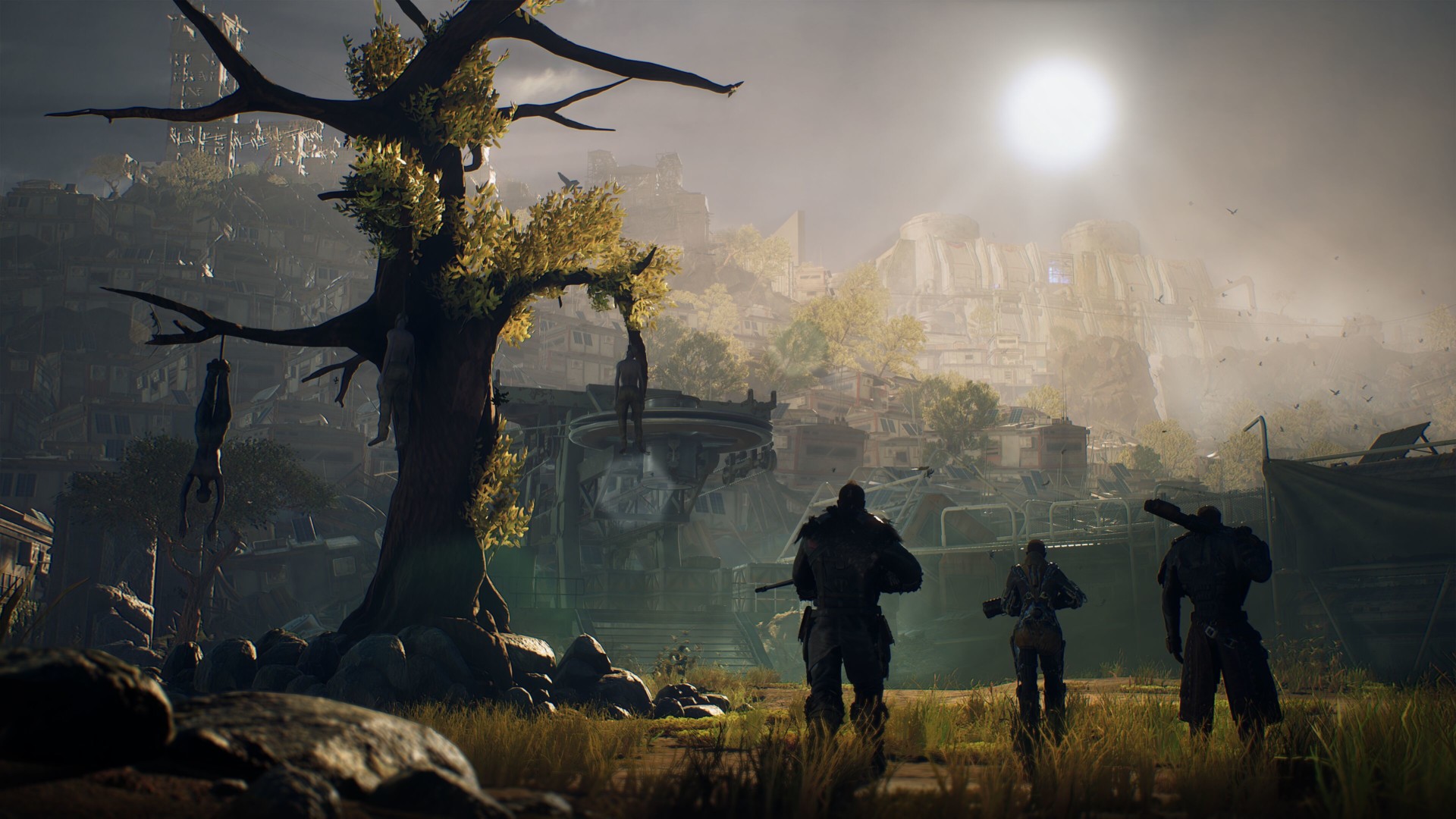 Outriders, the next game project from studio People Can Fly, is a bit of a mixed bag in its preview build. The developer has been quietly toiling away on their most ambitious project to date since buying themselves out from Epic back in 2015 and revealed it with a short teaser back at E3 2019. Last week I got to spend about three hours with the game that’s set in a brand new dark sci-fi universe and will be coming to the Xbox One, Series X, PlayStation 4, PlayStation 5, and PC later this year.

First things first. As previously reported, Outriders is not a games-as-a-service title. The developers were sure to clarify that when Outriders releases, it’s the full package. No lootboxes or pay to win aspects either. Secondly, it’s not a first-person shooter, nor is it an open-world game. But it is a third-person shooter and an RPG.

The first part of our preview took us through the prologue of the game where you get to create a customized character (male or female) and experience the events that lay the groundwork for the story ahead. In short, Earth has been destroyed and two colony ships were sent to the unexplored planet of Enoch to make sure that humanity lives on. Only one of the ships, The Flores, survives the journey. You play an Outrider, part of a group of warrior pioneers and explorers that are tasked with scouting out this new world and making sure it’s safe for the new colonists.

However, a storm called the Anomaly sweeps over the land, disintegrating or altering everyone caught in it. Your character survives the storm but is tossed into cyrosleep to recover from injury. Thirty years pass, and you awaken in a completely changed world that has been ravaged by war and the continuing Anomaly storm.

I’m not really sold on the premise of the story of Outriders just yet. Most of the characters introduced felt relatively generic, and so far, it seems like your mostly standard “everything went wrong and we have to fix it” sci-fi affair with some dark fantasy elements mixed in to give the world and gameplay some more leeway in the creativity department. 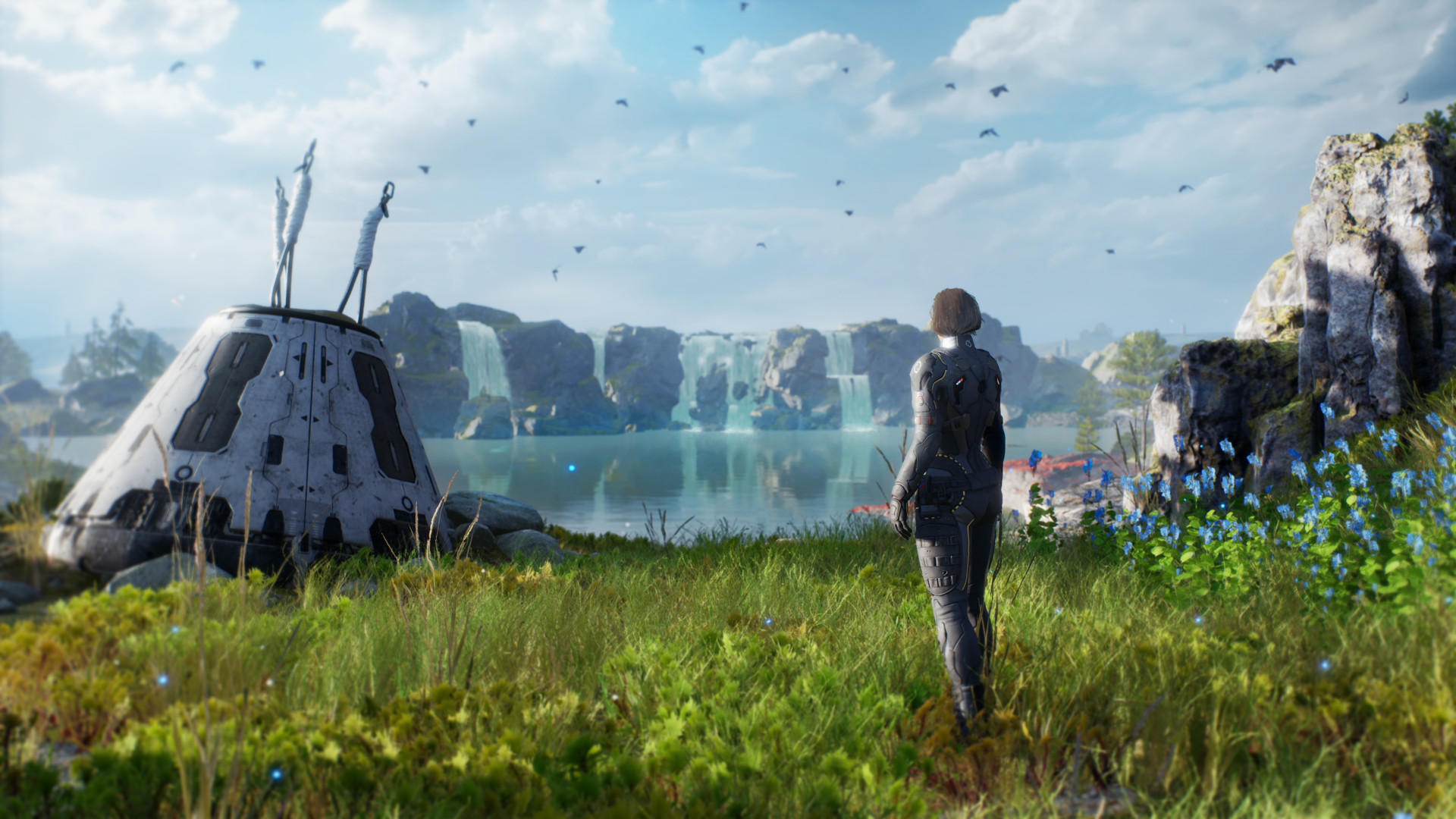 The opening prologue has you exploring a bright and vivid world full of life and natural beauty, and after waking up from cryosleep you’re introduced to scenes that look like a combination of World War 1 and Mad Max. It’s a great contrast and sells the desperation and brutality of the world for the people surviving in it — but really only in those opening moments. Once into actual missions, the environmental design displayed felt uninspired.

Outriders is a bit like Destiny with a centralized hub space and different zones that you’ll travel to for missions. The few missions we got to play in the preview were quite linear, so I can’t really comment on the amount of exploration you’ll be able to do in other zones, if any. Since the game is also an RPG, you can do all the expected things like select different dialogue options, customize your character, and collect weapons and armor. The developers say there are “hundreds of items” with increasing weirdness as you progress through the game and take on some side-missions.

The developers indicated that the main campaign would take around 20 hours to complete, and around 40+ to see everything the game has to offer.

While playing Outriders, the general movement and shooting mechanics felt reminiscent in a good way of Gears of War. People Can Fly worked on Gears of War: Judgment, and their experience with cover shooting has certainly translated well into Outriders. Where Outriders significantly differs from Gears is in its RPG mechanics via character classes that you select after finishing the prologue.

The preview build included the three of the four announced classes, the Trickster, the Pyromancer, and the Devastator. Each class provides a different play style and will have eight different unlockable abilities. The main difference with how Outriders handles classes with special abilities is that the cooldown timers are much shorter in comparison to those in other games. In keeping with the fast pace of combat, you’ll be using these abilities frequently, and they can be combined in quick fashion for some really fun combat maneuvers.

The Trickster for example gives you an ability to slow down time in a localized area around the character. I was able to dash behind a group of enemies, freeze them in place with my time-stopping ability, and slash them with a blade that essentially causes enemies to explode on contact. Since I was only able to use three of the available abilities, it’s hard to judge how creative the developers will get with them, but if done right, it should offer up a fun variety of combinations for players to combine with their teammates’ abilities for interesting results.

Combat in Outriders is snappy, fun, and well-paced from what we were able to play, if a bit uninspired. There was a decent amount of enemy variety, even in the opening hours of the game, and I expect things will become even more varied as you progress. Unlike in Gears of War, it’s difficult in Outriders to stick behind one piece of cover for too long.

The game forces you to stay on the move with enemies that will rush up on you with melee, area-of-effect, and long-range weapons. Some of the tougher enemies were a bit too bullet spongy for my tastes, but as you progress and upgrade your gear that seemed to be alleviated.

The guns felt pretty good to use, but variety was lacking in the preview. They showed us a few of the weirder weapons you can acquire in the game in trailers and during the information session, but I didn’t get a chance to mess with them in the actual game. The sound design of the weapons also could use some work, as they didn’t exactly sound threatening, to say the least.

One unique aspect of Outriders‘ combat and loot system is how the difficulty of the game organically builds the more you play. There’s a number of different World Tiers, and as you play, the game progressively gets harder in the background and rewards you with new items as you surpass each World Tier. If the game starts becoming too difficult, you can adjust the World Tier down a notch as well. It’s a good solution for accessibility by giving players both choice and incentives to adjust the difficulty to their liking.

My main takeaway from my time with Outriders is that this is all stuff we’ve seen before in other games, but I still had fun with my time with it. The game feels like it’s from the previous generation of games where third-person shooters were a bit simpler in design and focused on gameplay and story first over fleshing out a world with repetitive activities to extend your playtime with it. In some ways, it was even refreshing to feel like I was playing a game like that again, much in the same way that I felt playing through Gears 5 or Remnant: From the Ashes last year.

I’m hesitant to call Outriders “generic” before I’ve seen more of it, but the opening hours didn’t do a whole lot to get me overly excited about the game. I came away from the preview still wondering what was the unique hook of the game, something that the developers themselves didn’t really seem to be able to answer when I interviewed them after the preview.

Outriders doesn’t really have to be unique to be good though. If there’s one reason for me to be interested in the game as someone that’s had their fill of never-ending games as a service titles, it’s that it’s a complete experience with a main story to follow and some optional sidequests that I can finish and be done with in a reasonable amount of time.

I think my biggest disappointment coming out of the Outriders preview is that the creativity found in the studio’s past games like Bulletstorm really just wasn’t present. It’s important to remember then that many of the key members that made games like Painkiller and Bulletstorm are no longer at the studio, which was echoed by former People Can Fly creative director Adrian Chmielarz this week on Twitter.

Outriders currently feels like a combination of a bunch of different AAA titles stuck into one package, and in the current market, that’s probably going to be a tough sell for many. The main attraction Outriders has going for it at the moment is that it’s combining an RPG with a looter shooter and a more traditional narrative, but even that’s not really a big sell.

I’m not writing it off just yet because the combat in general felt quite good, and I haven’t seen enough of the story or world yet to pass final judgment. But judging from the reactions to the reveal trailer, People Can Fly has a long road ahead of them to clearly spell out what makes Outriders unique.