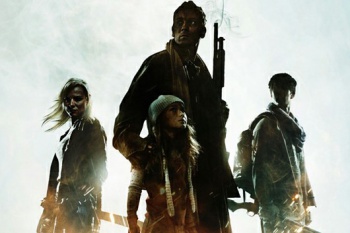 Things are certainly looking up for for the Android Ouya console. The team’s Kickstarter project raised over a million dollars on its very first day, and is now sitting at over $5.1 million with days to spare. It’s an incredibly promising start, but as console producers like Nintendo were recently reminded, the success of a console is based on its games, not a hardware sales pitch. The Ouya team is well aware of this, and has begun steps to make the platform accessible for developers before launch. Project Lead Julie Uhrman has even managed to secure a launch title: an Ouya-exclusive prequel to Robotoki’s Human Element which will launch in advance of versions planned for other systems.

“Human Element, in 2015 when it releases, actually takes place 35 years after [the zombie apocalypse] has occurred,” Bowling explains in a Kickstarter update, “but we thought it would be exciting to give you a glimpse a little early … So what we’re going to do is we’re going to work with the Ouya team, and bring you an exclusive, episodic look at the world as it develops and collapses over the course of the event happening.”

The news of an Ouya exclusive isn’t a huge surprise to backers, who were made aware via previous updates that an SDK is already in the works. Ouya’s SDK is based on the pre-existing Android development kit, with additional features allowing developers to promote their games and charge customers.

The PC and next-gen console version of Human Element will be an open-world survival game. Players will design a character using a combination of class and identity profiles that determine not just how players can engage zombies, but how they can engage their surroundings and other NPCs. Bowling also plans for mobile versions of the game that will deal more specifically with resource management. Bowling has yet to confirm what genre the Ouya-exclusive version of Human Element will follow, but adds that the prequel will present “some of the survival scenarios and elements” planned for the full game.

Bowling isn’t just supporting Ouya with an upcoming game, he’s also a major backer of the console itself. According to the update, Bowling has personally pledged $10,000 to the project, an honor credited to only six backers in the Kickstarter rewards page.

Zombies Eat the World in The War Z MMO